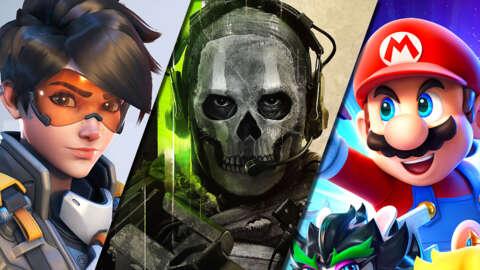 Overwatch 2 is the sequel to 2016’s Overwatch and will include some new takes on the combat we saw in the original game. That includes a brand-new game mode called Push, in which two teams fight to escort a robot into enemy territory, as well as the game’s switch to 5v5 matches instead of the original game’s 6v6 model. Team composition is also being adjusted so that teams only contain one tank character so plan accordingly when assembling your friends to play.

While its predecessor saw Mario and company in familiar territory as the Rabbids were transported to the Mushroom Kingdom, that won’t be the case in Mario + Rabbids Sparks of Hope. The adventure will take our heroes across multiple planets as they work together to stop an “evil influence”. Sparks of Hope combines free-roaming exploration with turn-based combat. While wandering each planet, you’re free to move as you wish in order to solve puzzles and uncover secrets and collectibles. Once you make contact with an enemy, however, the game switches to a turn-based strategy system.