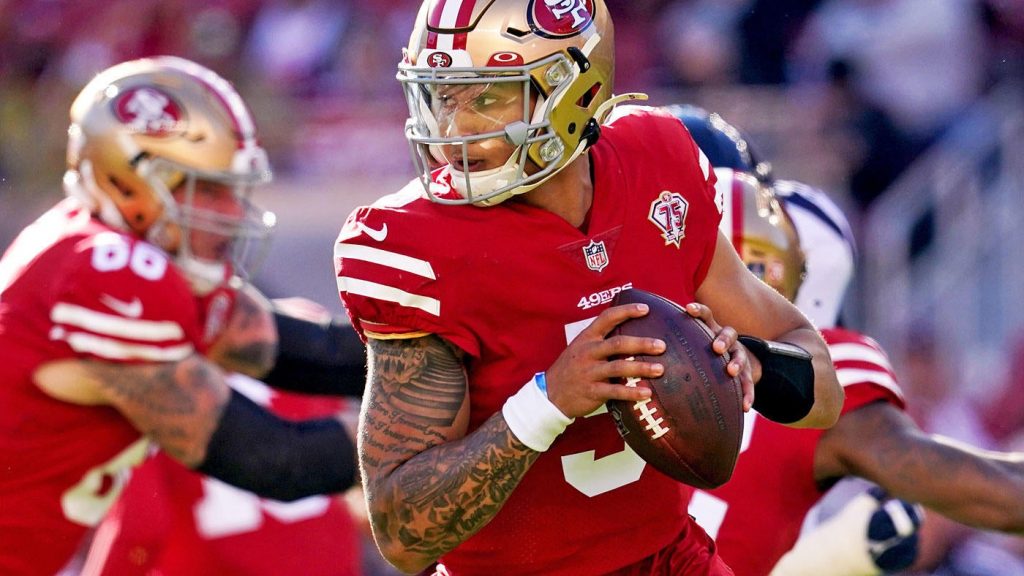 The 2022 NFL preseason is in the rear view, and now all 32 teams have finalized their rosters for the regular season. “Finalized” is a loose word here, considering lineups will be tweaked from now until the end of the year. But we now have a clear look at what most clubs will look like going into Week 1. Here are 32 key takeaways from Tuesday’s deadline for final cuts:

1. The pressure is on Trey Lance. Actions speak louder than words, and the 49ers happily welcoming back Jimmy Garoppolo on a revised contract suggests Kyle Shanahan can’t fully quit his oft-injured flame. Yes, quarterback insurance is necessary. But imagine being Lance, now having your predecessor back in the room as you attempt to not only win games but win over everyone on and around the team.

2. The Eagles have upgraded basically every one of their positions of need after trading for Chauncey Gardner-Johnson, the feisty ex-Saints slot corner. Gardner-Johnson will slide in as a starting safety in a secondary also featuring Darius Slay and James Bradberry. Maybe it’s not wrong to buy into the Philly hype.

4. Dameon Pierce is even more poised to make noise at RB, with former Colts starter Marlon Mack among those cut. The rookie Florida product should be an easy choice to handle the top job, with Rex Burkhead as a complement.

5. Malik Willis’ preseason electricity wasn’t for naught, with the Titans cutting Logan Woodside as Ryan Tannehill’s top backup. Quietly, this situation has similarities to the Lance-Garoppolo pairing of 2021. It’s probably a matter of time until Tennessee is itching for Willis’ athleticism under center.

6. The Cowboys don’t value the backup QB position. After cutting all three of Dak Prescott’s reserves (Cooper Rush, Will Grier, Ben DiNucci), they’re reportedly planning to bring at least one back once they can move other veterans to injured reserve. That means they trust they’ll be available, which means everyone else around the NFL thinks very little of them. Which is fine, if you believe any extended loss of Dak means the season is doomed anyway. Still, legit No. 2s can go a long way.

7. Josh McDaniels cares not for the investments of the Jon Gruden-Mike Mayock era. Cutting 2021 first-rounder Alex Leatherwood is an admission of a bad gamble at right tackle, but trading Trayvon Mullen, a 24-year-old starting cornerback, is quite the endorsement of a remade secondary headlined by Rock Ya-Sin.

8. The Jaguars really do have a deeper receiving corps, as evidenced by the release of Laquon Treadwell, who emerged as a favorite target of Trevor Lawrence down the stretch in 2021.

9. The Dolphins are going to need extra effort from former first-rounder Noah Igbinoghene with starting corner Byron Jones out for at least four games coming off an Achilles injury. Or just even more big plays from Xavien Howard and Jevon Holland.

10. Speaking of big-time CB injuries in the AFC East, it’s time for Kaiir Elam to make an early impact in Buffalo, where All-Pro Tre’Davious White is also guaranteed to miss at least four games as he recovers from an ACL tear.

11. Brian Robinson Jr.’s inclusion on the Commanders’ active roster, just days after gunfire struck him in an attempted carjacking, confirms he’s on track for a big role in their offense. The rookie seemingly overtook Antonio Gibson as Washington’s primary ball-carrier as the summer progressed.

12. The Panthers are built to play some rugged, dink-and-dunk football. They already had Christian McCaffrey and D.J. Moore, and now Laviska Shenault has been freed from Jacksonville via trade as a spicy outlet for Baker Mayfield.

13. Taking a cue from their NFC East brethren in Dallas, the Giants are rolling the dice in terms of QB health and depth, cutting the cord on Davis Webb’s second stint in town to leave only a banged-up Tyrod Taylor behind Daniel Jones. Then again, Webb could very well return to the practice squad.

14. Josh Gordon’s NFL career might be over after his release from the Chiefs, who were eager for WR help this offseason after dealing Tyreek Hill. Now 31, he’s caught all of 12 passes in 17 games over the last three seasons.

15. Tyler Johnson’s career just might be getting started after the former fifth-round pick was a surprise cut from a crowded Buccaneers WR room. A big-play threat coming out of Minnesota, he figures to be a hot target as a developmental option after two relatively quiet years in Tampa Bay.

16. It’s safe to count on decent workloads for both Chase Edmonds and Raheem Mostert in Miami, where the Dolphins said goodbye to Sony Michel before the ex-Patriots and Rams starter took a single regular-season snap. Edmonds got good money to leave Arizona back in the spring, and Mostert has a history working under Mike McDaniel.

17. While RBs are as replaceable as ever (see: Michel, Sony), the veteran market has a new plug-and-play option in Phillip Lindsay, who couldn’t crack the Colts behind Jonathan Taylor and Nyheim Hines. At RB2 or RB3, you can do much worse.

18. Justin Fields still has an ugly WRs corps beyond Darnell Mooney, and Chicago keeping seven on the 53-man roster just proves it, with Velus Jones Jr., Byron Pringle and N’Keal Harry — none of them overly encouraging on their own — all banged up and candidates to hit IR.

19. The Jets weren’t happy with whatever trade offers they may have gotten for Denzel Mims, the former second-rounder who balled out in the preseason finale. But there’s still time for them to dangle him ahead of — or early in — the 2022 season.

20. Pittsburgh is a little better on the margins after swapping draft picks for a couple of low-floor veterans: Jesse Davis at guard and Malik Reed off the edge. The former started every O-line spot except center during a four-year run with the Dolphins, and Reed quietly totaled 13 sacks in his last two seasons with the Broncos.

21. Shaquille Leonard, formerly called Darius, is on track to miss minimal time after avoiding a Physically Unable to Perform designation. He underwent back surgery this summer. A trip to IR isn’t out of the question, but it seems farther-fetched.

22. The Vikings really weren’t happy with Kellen Mond’s development, cutting the former third-rounder just one year into his career, and handing the No. 2 job behind Kirk Cousins to the newly acquired Nick Mullens.

23. The Broncos still see something in Brett Rypien, who’s set to be the backup to Russell Wilson after Josh Johnson’s release. Or else they’re plotting an additional move at the position in the wake of other teams’ cuts.

24. The Lions, like their rivals in Minnesota, weren’t content with whatever was happening at the backup QB spot, cutting ex-Packers reserve Tim Boyle and tentatively turning to David Blough as Jared Goff insurance. Gulp?

25. Jalen Reagor may well have a future in Philadelphia. The 2020 first-rounder, relegated to a near-nonexistent role with A.J. Brown and DeVonta Smith giving the WR room some real juice, survived final cuts and might be better off without the pressure of performing atop the depth chart, a la Nelson Agholor years ago.

26. Buccaneers center Ryan Jensen might be a safer bet than expected to return this season, despite his severe knee injury during camp. That’s because Tampa Bay reportedly cut veteran safety Logan Ryan with the intention of soon shifting Jensen to IR, re-signing Ryan and hoping to designate Jensen for a regular-season return down the road.

27. O.J. Howard just might not be the pass-catching weapon everyone envisioned when he came out of Alabama. If it wasn’t apparent during his Buccaneers run, perhaps it is now, after the Bills cut him loose after a single summer.

28. Mike McDaniel believes in Skylar Thompson’s potential. The rookie seventh-rounder dominated the preseason, earning a 53-man spot behind Tua Tagovailoa and Teddy Bridgewater rather than hitting waivers for a potential practice-squad move.

29. Chargers corner J.C. Jackson might be ready sooner rather than later, avoiding PUP despite recently undergoing ankle surgery that was expected to sideline him for up to a month. He’s still an official possibility to suit up for Week 1.

30. Lance McCutcheon’s preseason wasn’t a fluke, at least in the eyes of Sean McVay, who’s keeping the undrafted Montana State product in his WR room while Van Jefferson recovers from knee surgery.

31. The Chiefs’ RB room is as unpredictable as ever, with former Bucs starter Ronald Jones securing a job despite a slow start to camp and preseason. He could split time with Clyde Edwards-Helaire, Jerick McKinnon and Isiah Pacheco.