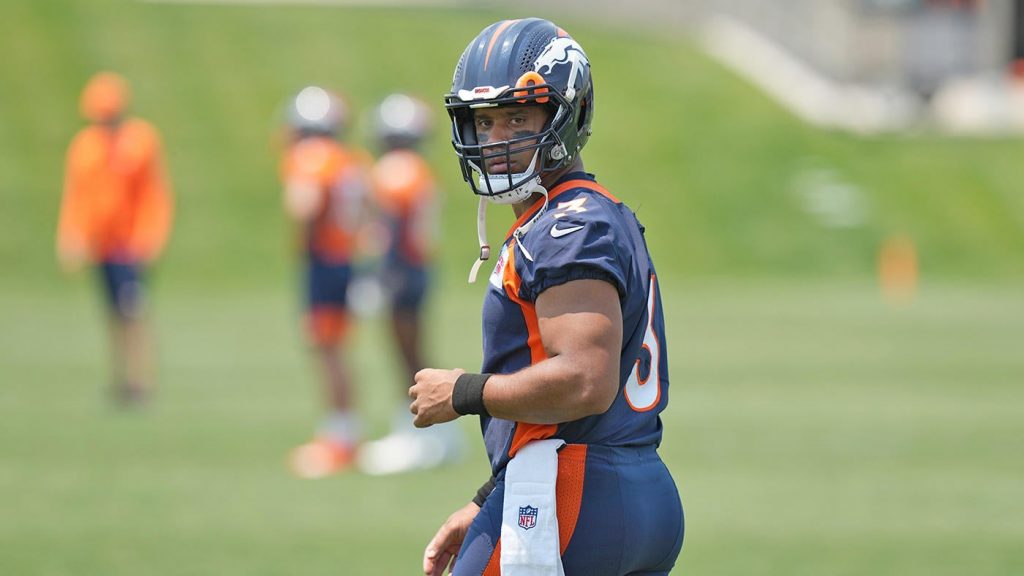 With the start of the NFL season coming this week, that means it’s time for everyone’s favorite thing: PREDICTIONS.

Sure, most people only love reading predictions so that they can make fun of everything you got wrong at the end of the season, but that’s not a problem for me. I’m a middle child, so I’ve been made fun of my entire life.

Before we get to my predictions, let me explain how things are going to work here: I’m going to go through each division and predict each team’s final record. After that, I’ll be making a bold prediction for each division. Once you roll through the divisional portion of these predictions, you’ll see my playoff picks and eventually, my Super Bowl champion. In four of the past seven years, I’ve correctly picked the AFC team that ended up in the Super Bowl, and in two of the past seven years, my preseason Super Bowl pick has ended up winning it all, so you might want to scroll down and check out my prediction for the Super Bowl to see if I’m picking your favorite team.

Also, since we all know that making fun of someone’s predictions is half the fun of reading predictions, you can send all your hate tweets to me on Twitter by clicking here, and just so you know, Cardinals fans, I’m already mentally preparing for your hate tweets.

Finally, if you’re wondering how I did last season, I predicted the exact win total of five different teams. I also correctly predicted the entire NFC divisional round of the playoffs. Not only did I predict that the Packers would play the 49ers, but I also predicted that the Rams would play the Buccaneers. On the other hand, I completely whiffed on Philadelphia. I had the Eagles going 5-12 and if you watched any football in 2021, then you already know the Eagles didn’t go 5-12. With a first-year coach, they ended up going 9-8 and making the playoffs. I feel so bad about whiffing on them last year that I’m going to make it up to them by picking them to win the division this year…. or maybe I won’t. I don’t know, I’m not sure yet.

You don’t care about last year though, so let’s get to the 2022 predictions.

I don’t have high expectations for the Jets this year, but I do have high expectations for Sauce Gardner, their rookie corner who was selected with the fourth overall pick in the NFL Draft. Gardner plays in a division where a cornerback can thrive and that’s because the starting quarterbacks he’ll be facing in the AFC East all love throwing interceptions. Josh Allen, Mac Jones and Tua Tagovailoa all finished with double-digit picks last season (Allen tied for the third-most interceptions in the NFL with 15 while Jones threw 13 and Tua threw 10). Of course, even if he doesn’t win rookie of the year, I do fully expect him to win coolest endorsement of the year because no one is going to top “Sauce sauce.”

Every year, the NFL seems to produce at least one team that goes from worst-to-first. Last year, it was the Bengals, and this year, I think that team is once again going to come from the AFC North with Baltimore. Although the Ravens finished at the bottom of the division last year, their 8-9 record was arguably kind of impressive when you consider how many players they lost to injury. I could try and list them all here, but my keyboard might explode if I tried to list that many names (There were a lot of them). Not only did they lose Lamar Jackson for five games, but they also lost key starters like cornerbacks Marcus Peters and Marlon Humphrey, along with running backs J.K. Dobbins and Gus Edwards. As long as they can stay healthy, I think they can win the division.

The AFC South has arguably the two best running backs in the NFL in Henry and Taylor, so I’m putting them in a prediction together. The reason this qualifies as a bold prediction is because it’s NEVER happened in NFL history. There’s never been a season where two running backs both rushed for more than 1,900 yards. The closest it came to happening was in 2003 when Baltimore’s Jamal Lewis (2,066 yards) and Green Bay’s Ahman Green (1,883) both ran for more than 1,880 yards. Although Henry has been one of the NFL’s best running backs throughout his six-year career, he’s only topped 1,900 yards once. As for Taylor, his career-high came last season when he led the NFL with 1,811 yards. This year, I’ll predict they both top 1,900.

AFC West bold prediction: Every team in the division finishes above .500

The AFC West is so loaded this year that the entire division could end up making NFL history. Since the NFL-AFL merger in 1970, there has NEVER been a season where every single team in a division finished with a winning record. There have been several seasons where the last place team finished 8-8 (most recently in 2008 NFC East), but there’s never been an instance where every team finished ABOVE .500. With Patrick Mahomes, Russell Wilson, Justin Herbert and Derek Carr at quarterback, it’s hard to imagine any team in this division finishing the year with a losing record.

I thought about picking the Giants to win the division, just kidding, no I didn’t. I just wanted Giants fans to feel good about something for a brief second because I’m not sure there’s going to be much to feel good about this year. Anyway, my bold prediction in the NFC East is that Micah Parsons ends up taking home the Defensive Player of the Year award. Parsons had one of the most electrifying rookie seasons of any defensive player in NFL history and that’s a big reason why he was voted Defensive Rookie of the Year last season. The Defensive Player of the Year award is usually reserved for Aaron Donald or someone with the last name of Watt, but this year, I’m going to say Parsons breaks through and wins it.

During his MVP season last year, Aaron Rodgers targeted Davante Adams 169 times and with Adams no longer on the roster, those targets have to go somewhere else and I’m guessing that a lot of them will be going to Doubs. The rookie receiver had an impressive training camp and although he’s struggled slightly with drops, I’m not too concerned about that. I mean, there was a concern about drops with Ja’Marr Chase during the preseason last year and everything seemed to work out just fine for him. This is a bold prediction because Doubs is currently somewhat of a long shot to win the award. At 14-to-1, there are four players with better odds.

Tom Brady already holds nearly every NFL passing record, so why not add one more? The Buccaneers quarterback threw for 5,316 yards last season, which was the third-highest single-season total in NFL history. Although Brady was impressive last year, apparently he might be even better this year.

Not even an 11-day vacation can slow him down.

If Brady is throwing it better than ever, then the NFL should just cancel the season because there’s no way he’s going to let Tampa Bay lose a single game. The only concern with this prediction is that Brady might not survive the season playing behind Tampa Bay’s battered offensive line. If he does survive, I won’t be surprised if he tops Peyton Manning’s record of 5,477 passing yards that was set in 2013.

After watching the Cardinals make the playoffs last season, I’m predicting that they totally collapse this year. The two things that worry me the most are the loss of DeAndre Hopkins (who’s suspended for the first six games) and their depth at corner. On the Hopkins end, since acquiring him in March 2020, the Cardinals offense has struggled whenever he’s not on the field, which means they might struggle to score points early in the season. Also, they’re going to be short-handed at corner with Antonio Hamilton missing at least the first four games of the season. Not being able to score and not being able to stop the pass could mean trouble early in the season since the Cards open the year with consecutive games against three high-powered offenses in the Chiefs, Raiders and Rams. If the Cardinals start 0-3, I could see them fully imploding from there.

The past two Super Bowls have both been won by a quarterback who was in his first year with a new team (Tom Brady, Matthew Stafford) and you know what, I’ve decided I’m just going to ride that train until it crashes, so I’m going with Russell Wilson and the Broncos to win it all this season.

If I’ve learned one thing from watching Wilson for the past 10 years, it’s that if you give him a good defense, a solid running game and decent receivers, there’s a good chance he’s going to get you to the Super Bowl, and the Broncos have all of that.

During Super Bowl week, we’ll be able to spend seven straight days talking about the fact that the Broncos are coached by a guy (Nathaniel Hackett), who spent the past three seasons in Green Bay as Matt LaFleur’s offensive coordinator.

The prediction here is that Wilson and Hackett the Broncos to a 31-24 win over the Packers, which will be somewhat poetic since the win will come 25 years after the Broncos beat the Packers 31-24 in Super Bowl XXXII. I fully expect this game to be a thriller because that’s basically what happens any time Wilson and Aaron Rodgers face each other (See: Fail Mary and/or 2014 NFC title game).

If the Packers lose, I’m guessing Aaron Rodgers will spend the entire offseason on a South American psychedelic drug bender, which is probably the same thing I would do.

On the other hand, if the Broncos end up winning the Super Bowl, Russell Wilson will almost certainly be spending his entire offseason turning one of the 12 bathrooms in his new Denver house into a Lombardi Trophy room.

I mean, let’s be honest, no one needs 12 bathrooms.

As a final note, I will have you know that I’ve only picked the Broncos to win the Super Bowl one other time since I’ve been working at CBS Sports and that came in 2015. The good news is that I ended up being right. The bad news is that I didn’t end up moving to Barbados.

Finally, if my season predictions all pan out — and I’m sure they will — here’s what the top of the NFL Draft order will look like next April.