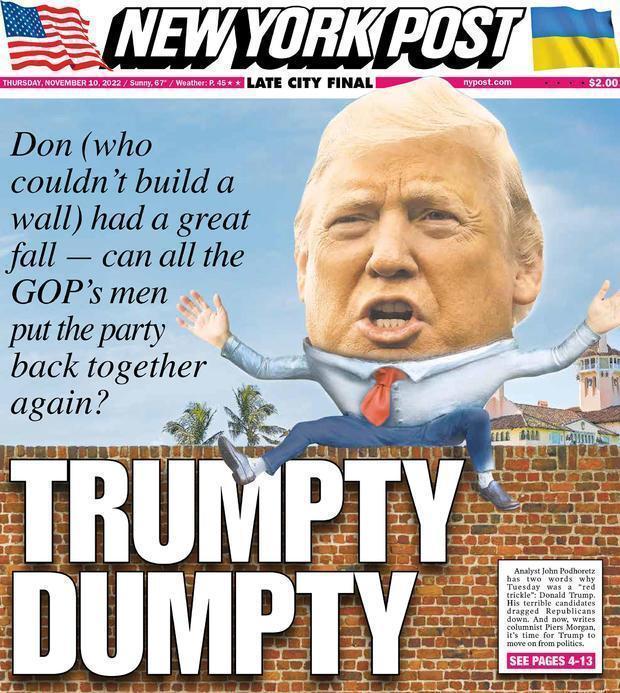 Here’s where we are, as the midterm vote count drags on: the House is still in play (leaning Republican, just barely, according to CBS News estimates).

Now that Senator Catherine Cortez Masto has been projected to win in Nevada, and with Senator Mark Kelly’s apparent victory in Arizona, the Democrats have likely held the Senate. If they win the December 6 run-off between Senator Raphael Warnock and Republican challenger Herschel Walker in Georgia, they’ll actually pick up a seat.

“You have to admit that I did warn y’all that we might be spending Thanksgiving together,” Warnock joked.

Based on what usually happens in the midterms, inflation worries, and Republican expectations, right-wing media and GOP pundits were forecasting a “red wave.” Democrats were supposed to lose, big.

“It’s gonna be a big red wave, no matter what people in the media say,” CPAC chairman Matt Schlapp said on MSNBC. “Take it to the bank!”

And Texas Senator Ted Cruz said on October 28, “We’re gonna see, not just a red wave, but a red tsunami!”

So, what happened to the “red wave”?

On Wednesday President Joe Biden said, “Democrats had a strong night.  And we lost fewer seats in the House of Representatives than in any Democratic president’s first midterm election in the last 40 years.”

New Yorker staff writer Susan Glasser, co-author of “The Divider: Trump in the White House, 2017-2021,” said, “Perhaps it’s best to think of it as all about Dobbs, denialism, and the Donald. Democrats made a pretty strong case that Republicans have become a party of extremism. However, I would point out another factor as well: the political euphemism of the year this year is candidate quality. And really, that is just another way of saying that the Republicans ran some pretty bad candidates in some of these key races, many of them supported and pushed by Donald Trump.”

On Tuesday Trump told Newsnation, “Well, I think if they win, I should get all the credit. And if they lose, I should not be blamed at all.”

Former Trump stalwarts are piling on, not least of which was the front page of the New York Post.

Former Speaker Paul Ryan said, “I think Trump’s kind of a drag on our ticket.”

And on CNN, Alyssa Farah Griffin, who was at one time Trump’s White House communications director, said, “If you want the Republican Party to thrive, we’ve got to just finally speak out and say, ‘This man is a loser.'”

Even the Wall Street Journal’s editorial board called Trump the name he hates the most: loser.

But wait: a reality check.

Julian Zelizer, a professor of history and public affairs at Princeton University, and author of “Burning Down the House,” about former Speaker Newt Gingrich, said, “If the balance of power changes in any significant way, meaning do Republicans take control of the House, that is gonna have a big impact, and that still in some ways is a successful midterm for the Republicans.”

On Thursday, House Minority Leader Kevin McCarthy laid out his agenda on Fox News: “What was our mission? To win the majority, to stop Biden’s agenda, and fire Nancy Pelosi. All of that is accomplished.”

Power is power. Even with some races still undecided, McCarthy, the would-be Speaker of a Republican House, has already formed a transition team, and has been consulting Gingrich (in Zelizer’s view, the patriarch of no-holds-barred partisanship).

“If you’re making a bet about where a Speaker McCarthy would go, the safe bet would be he’ll be aggressive,” Zelizer said. “He’s gonna use the kind of language that Gingrich always promoted. He’s gonna try to vilify and put Democrats and the Biden administration under constant investigation. So, a ripple or a wave, either way, what you’re gonna have is probable gridlock.”

McCarthy is among the more than 300 GOP candidates who ran for state and federal office this year who are 2020 election deniers. More than 180 have been projected to win so far, including at least four in races for secretaries of state, the officials in charge of elections, although notably not in key battleground states, such as Arizona, Michigan and Georgia.

Zelizer said, “That’s the question of 2022. Do the ones who win have enough power, are they situated in the right places, does the 2024 election unfold in such a way, that their influence is still enormous?”

These midterms, after all, set the stage for 2024 – a stage Trump fully intends to dominate, as he is expected to announce his candidacy this week.