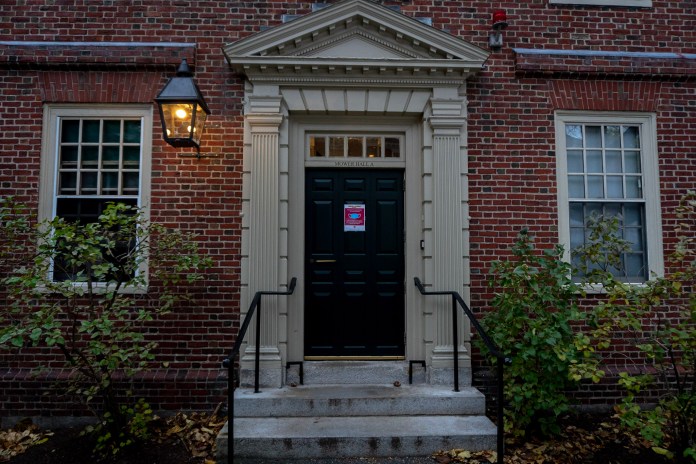 5:15 a.m. | Left: Inside the Harvard gates, behind a card-activated private door, Michael, 19, a first-year at Harvard College, sleeps peacefully. He has hours left to rest before his day begins.

5:15 a.m. | Right: Outside the Harvard gates, the entirety of the personal belongings owned by Jonathan, 37, and Jillian, 38, a recently-engaged unhoused couple, sit by a building in Harvard Square. This is where their bed for the first half of the evening remains until, on schedule, they are forced to move to a new spot because of the arrival of construction workers.

8:05 a.m. | Left: Michael, fresh out of the shower — a shower taken in the private bathroom he shares with two suitemates — sorts his outfit for the day as he gets dressed for breakfast. He has a very busy day ahead of him that includes two classes, extracurriculars, and dinner with friends. Michael is from upstate New York, and this is his first time living outside of his parents’ home.

8:15 a.m. | Right: Jonathan and Jillian have just woken up after another rocky three hours of sleep on the street. Here, in front of a Harvard Square bank, they are conversing with fellow unhoused person, Slick*, who brought them breakfast from the Harvard Square Homeless Shelter and offered them weed. They will have to move again when the Santander Bank employees arrive at 8:30 a.m. Jonathan told me that he chose to live on the streets with Jillian after they met and started dating.

8:30 a.m. | Left: Michael has a wide range of breakfast options displayed for him in the Annenberg dining hall. This grand cafeteria bears a striking resemblance to Hogwarts and is open only to Harvard College freshmen during lunch and dinner hours. Situated in one of Harvard’s most recognizable landmark buildings, Memorial Hall, Annenberg hosts buffet-style set-ups three times a day that stretch across the back wall and in the middle of the space. Menu items specially made for vegans, as well as those who stay kosher and halal, and gluten-free options are all available in this cafeteria. Michael chooses a healthy breakfast consisting of oatmeal, raisins, mixed fruit, and a dash of cinnamon.

8:30 a.m. | Right: Jonathan and Jillian share a laugh after just setting up their third “home” in less than five hours. Jonathan says that they will claim this space on the bench for the whole day, unless they can find a more private space to settle. They will move, once again, closer to bedtime. Here they are eating the breakfast sandwich that was delivered to them by a friend — they did not choose what was on the sandwich.

9:00 a.m. | Left: Michael catches up with his brother on the phone while waiting for his Chinese class to start. He is currently taking four classes at Harvard College including Beginner Chinese, Comparative Politics, Micro Economics, and Confronting Climate Change.

9:05 a.m. | Right: Jillian is in tears because of the traumatic event she (and I) experienced in the minutes before this photo was taken. I, alongside Jonathan, discovered the lifeless body of an unhoused man, known as “Mike,” outside of Bank of America just feet to the left of the natural crop of this image. Mike was a bigger gentleman in both height and weight, always quiet, and kept mostly to himself as he wandered barefoot around Harvard Square. I had just given him a warm meal at the shelter five days before. Jillian, wiping a tear, said, “This is the 36th dead person I’ve seen in the eight years I’ve been homeless.” That would average out to her finding nearly five dead bodies on the street per year.

10:15 a.m. | Left: Michael stops to chat with a classmate and cheer on the Divest Harvard team as they protest the university’s long-standing investments in fossil fuels in the Harvard Kennedy School common room. Michael’s passion for environmental justice, politics, and community service is the fire that drives him. “My passion for these issues stems from the future that I want to see — which is sustainable, inclusive, and just,” he said.

10:45 a.m. | Right: Jonathan and Jillian take time to deal with some of the emotions that came with witnessing the lifeless body of an unhoused man. We all sat together, letting out tears and comforting each other. Jonathan said that traumatic experiences like that make him think about shooting up drugs, but he wants to stick to his sobriety so he can stay out of trouble and be with Jillian. “I promised her I wouldn’t go to jail,” he said.

11 a.m. | Left: Michael, on the move again, as he heads for another stop at Annenberg. He tells me he is hosting a “berry giveaway” with his team from the Resource Efficiency Program, which is part of the Office for Sustainability, to promote Energy Week at Harvard. This is a week dedicated to fostering understanding within the Harvard community about their energy use and how we can reduce our energy consumption.

11 a.m. | Right: Jonathan and Jillian, after taking a short break from carrying their heavy bags, gather their strength and carry on with their day as they journey to the University Lutheran Church on Winthrop Street. The church hosts a weekly free shower event in their basement where the Harvard Square Homeless Shelter operates. The couple relies on the showers provided by the church, and even though the facilities are not very private (shared by multiple unhoused community members, unknown to the couple, throughout the day), they are grateful to have somewhere to keep clean. Jonathan prides himself on the couple’s hygiene and states, “We aren’t like a lot of the other people out here on the street, we take care of ourselves and keep ourselves clean.” This is their first and only shower for at least the next 24 hours.

7 p.m. | Left: Michael stands in Harvard Yard as he calls his friends to remind them about the dinner event he invited them to that evening. He tells me he practices Judaism and that we are going to a Harvard Chabad dinner. While he does not keep kosher, he says Judaism has always been a part of his life. He recalls having mostly Jewish friends growing up in upstate New York and that he is happy that college is allowing him to open up his circle of friends to people from different walks of life.

7 p.m. | Right: Jonathan and Jillian have made their bed in front of a store that is under construction on JFK Avenue, and are getting ready to sleep. Jillian tells us a story about her life prior to meeting Jonathan and prior to being homeless. “I had my own apartment, I met a man that I thought I loved … and he introduced me to drugs. I don’t blame him for where I ended up — I made the choice to use,” she says. The couple tells me that Jillian once got an E. coli infection from shooting up crack mixed with tap water. She shows me the bruised-looking scar on her arm and says that she is happy she is sober now. The couple has been clean from drugs for nearly a month and tell me they plan to stay that way.

8:25 p.m. | Left: Michael is asked to recite Hamotzi, the blessing over the challah, by the Rabbi at Harvard Chabad. This is a special moment for Michael as it is his first time leading the prayer at Chabad. His optimistic energy is contagious and I feel a strong sense of pride for this young man whom I had befriended just weeks prior. The Rabbi tells a story about a ladder: “It doesn’t matter which rung you are on right now — the only thing that matters is that you are going up, and you are helping others up along the way.”

8:55 p.m. | Right: Jonathan and Jillian hold each other, ready for another cold night. They make sure to set their alarm to wake them at 5:15am when their moving schedule begins once again. The couple is in love. “We’re f—ing happy … and we live in a doorway,” Jonathan says. Their love is beautifully clear to see — Jonathan holds tight to Jillian in a protective embrace. This pure love and their support for one another in staying sober will be incredibly good for them in the long run.

Different but the same …

There are, clearly, stark differences between the lives lived on each side of the Harvard gates, and there is much more work that needs to be done to help our neighbors without homes. What can be found on both sides, however, is love, hope, and faith; faith that a better world is possible for all of us. Michael has just begun his journey on the inside of the gates and Jonathan and Jillian are starting their own newly sober and engaged journey on the outside of the gates. They all see a future for themselves away from the gates of Harvard; they have dreams — and they are on the path to accomplishing them.

Final Question: Where do you see yourself in five years?

Michael: “I will be doing some sort of public service work — government or nonprofit sector. Fighting for a better world!”

Jonathan and Jillian: “Owning a home, and being married with at least one little girl. Jonathan will hopefully be working as a drug counselor and Jillian will be an amazing, loving wife and mother.”