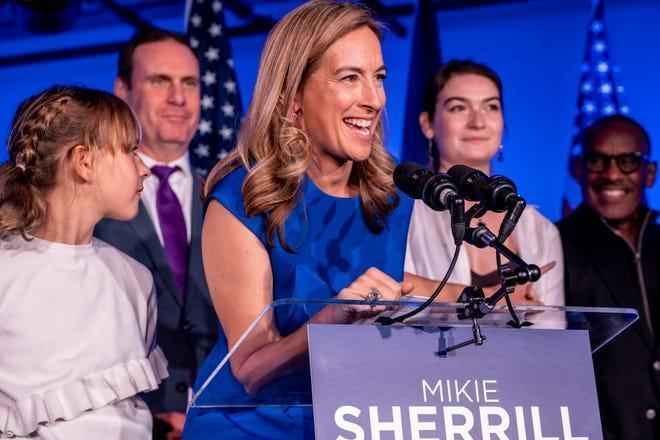 The big red wave — the one that prompted Republicans to stock up on Champagne and caused Democrats to clutch their pearls in dread — turned out to be a bust in New Jersey.

The state remains a blue stronghold. Democratic incumbents in three of four competitive districts cruised to double-digit victories, with Rep. Mikie Sherrill of Montclair leading the pack with a 17-point win over Republican newcomer Paul DeGroot of Montville.

The exception was Rep. Tom Malinowski, the Democratic incumbent in the 7th Congressional District, who lost a challenge from Republican Tom Kean Jr. in a rematch of the 2020 race, closely watched as a national bellwether. But that hardly came as a shock. Congressional redistricting last year turned the 7th into friendlier Republican territory.

But Tuesday’s results revealed some important political trends and dynamics that could shape the contours of politics in next few years. Here are some key takeaways.

Some Democratic strategists feared that candidates placed too much emphasis on abortion rights and not enough on pocketbook issues. Of primary concern to voters were curbing inflation or reducing crime. Polls found abortion to be a secondary issue, at best. The backlash over the U.S. Supreme Court’s Dobbs v. Jackson Women’s Health Organization ruling in June, which revoked federal access to abortion, became a powerful motivator of women and young voters.

It became part of a larger warning of Republican extremism that could control the House agenda if they seize control.

“MAGA versus moderation,” Malinowski said, in one of his talking points.

Sherrill and Rep. Josh Gottheimer of the 5th Congressional District also tapped the backlash fury in attack ads. One analyst argued Tuesday night that the backlash over Dobbs helped make the Malinowski-Kean race tighter than it should have been.

Inflation and the economy proved the most important voting issue and motivated 51% of voters in exit polls that were conducted by the Associated Press and analyzed by the Kaiser Family Foundation.

After the Dobbs decision, “people understood now the danger of the Republican agenda. It took it from the theoretical to the real world,” said Dan Bryan, a consultant for the Democratic Congressional Campaign Committee.

But abortion was the single most important issue for a quarter of all voters and for a third of women under age 50, the Kaiser report found. It also cited exit polls from NBC News, which placed the importance of abortion even higher, with 32% of voters saying inflation was their top voting issue and abortion ranking second at 27%.

Traditional middle-of-the-road moderation reasserted this fall, as Gottheimer, Sherrill and Malinowski pummeled their opponents as “extremists” who were out of step with mainstream New Jersey values.

In television ads, Gottheimer contrasted himself as the pro-police, problem-solver centrist concerned about rising property taxes while switching to images of his opponent, Frank Pallotta of Mahwah, in dark glasses as the narrator recited his anti-abortion position: “Frank Pallotta: Too extreme for New Jersey.”

Democrats looking for a winning formula might do well to emulate Gottheimer’s “brand of optimistic moderation” said Bob Sommer, a political communications strategist for Gottheimer.

But it also helps to have a stockpile of campaign cash to broadcast that message. Both Gottheimer and Sherrill amassed enormous war chests and were helped by a $2 million infusion of cash help from billionaire Mike Bloomberg near the end of the race. DeGroot and Pallotta lacked the resources to respond.

A big test for Kean as he enters Congress will be if he is able to revert to his moderate pedigree. Will Kean become a foot soldier for a right leaning agenda?

During the campaign, Kean leaned heavily to the right, campaigning as a pro-life Republican even though he insisted his long support for a woman’s right to choose, and a defender of the “Trump agenda.” But Kean was careful not to get pinned down on which specific parts of the Trump agenda he supported.

He will find himself wedged between the hard right activists who will never believe he’s sufficiently conservative, and the Malinowski Democrats whose convinced that he’s a MAGA Republican.

Targeting Pelosi fades as a tactic

Republicans have been casting Democratic candidates as as rubber stamps for House Speaker Nancy Pelosi for much of the last decade, and this year, it reached mantra-like intensity — even after the nation recoiled in horror at the attack of her husband, Paul, in their San Francisco home. Kean mentioned Pelosi so often in one debate that Malinowski mocked him for playing the “Pelosi drinking game.”

Kean campaign could argue that it helped mobilize votes against Malinowski, but it offered little help to DeGroot, Pallotta or Bob Healey, the Third District Republican, who was defeated by Democratic incumbent Andy Kim, although Healey fastened more of his attacks on Kim as a Biden protege.

Redistricting is an issue that voters rarely pay close attention to, but it was likely the most important factor behind Malinowski’s loss.

The new congressional district boundaries approved by the court-appointed tie breaker left Malinowski with a district that was stocked by 30,000 more Republicans as of October, when compared to the older district. It also added Democratic towns that he didn’t represent under the old map, like parts of Linden and Rahway in Union County. That forced him to redouble his outreach as a newcomer.

The map put Malinowski behind the eight-ball from the start, leading many prognosticators to predict a Kean victory. The map was also widely seen as a Machiavellian move by the Democratic party bosses.

But in hindsight, some supporters argue that it was unnecessary. Malinowski argues that he would have won if the Seventh District wasn’t sacrificed in the party’s strategic planning.

“I think it was a mistake,” Malinowski said in an interview Wednesday. “Not just because not so much because I’m upset about my own loss — in the larger scheme of things that my own situation is not important — but holding on to the seat is important to Democrats. The House has been, and apparently will remain so, narrowly divided.”

“There was enough Democratic votes to go around,” she said pointing to the double digit victories of Sherrill, Kim and Gottheimer. “And we played scared and compromised. We negotiated against ourselves when we didn’t need to.”

Sherill arguably produced the most aggressive, go-for-the-jugular attack ad of the campaign. It featured a veteran nurse, Maxine, warning that women “will die” because of DeGroot’s position on abortion. He declared himself pro-choice, but supported the Dobb’s decision directive to allow each state to craft their own abortion policies.

On one level, Sherrill’s attack on a little-known and underfunded opponent was a symptom of the leave-no-stone-unturned anxiety that coursed through even safe Democratic district races. But on another level, it served as an audition, a way to show party chieftains that she won’t be afraid to throw a punch if she runs for governor in 2025, as some predict.

Charlie Stile is a veteran political columnist. For his insight on New Jersey politics and his powerful watchdog work, please subscribe or activate your digital account today.

was Gottheimer’s challenger in the Fifth District, studiously avoided running with Trump. Yet,

We talked about 23 Let me bring up Paul de Groot who has done a great job running the city 11 And we have a congresswoman there who is an incredible great candidate and a piece of shit Congresswoman says all the right things and she votes with Nancy Pelosi and Joe Biden.