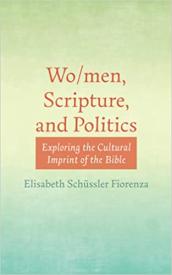 Exploring the Cultural Imprint of the Bible

On June 1, 2020, Donald Trump processed less than a quarter of a mile from the White House to St. John’s Episcopal Church. Though St. John’s had been damaged by protesters the night before, he did not reach out to the congregation, nor did his visit entail a survey of the damage. Hours later, the White House put out a video that showed Trump walking to and fro over dramatic background music, as if surveying the situation and ensuring the city was in order. The visit to the church was a symbolic act meant to show that the president was in control of the situation.

Oddly, Trump chose to use only one prop during this publicity stunt: a Christian Bible. At the time, I wondered: Why did it seem like a good idea to take a Bible to a damaged church if the point was to convey his ability to maintain order in the capital? Why not show Trump commanding military units or driving in an armored vehicle? Why the Bible?

Elisabeth Schüssler Fiorenza offers a possible answer. In Wo/men, Scripture, and Politics, she argues that the Bible has left a seemingly indelible imprint on American culture, and specifically on its political imagination.

Schüssler Fiorenza borrows the phrase “cultural imprint” from French marketing theorist Clotaire Rapaille. A cultural imprint is what it sounds like: a shared activity imprints a form or pattern upon a society’s conscience, informing the way that society thinks about roles, structures, or institutions. Like an imprint made by a child’s hand on wet cement that remains for years after the act itself, a cultural imprint remains even if the current generation doesn’t engage in the same activity.

So although the Bible is read less often now than in the past, the imprints of biblical figures and stories continue to shape the way we understand and analyze our society today. Rapaille suggests that Moses is a cultural imprint for the American presidency, leading Americans to understand the president as someone who ought to lead us out of the bad and into the good. Schüssler Fiorenza notes that a more specific cultural imprint for Trump would be King Cyrus, to whom many conservatives have likened him.

Schüssler Fiorenza wants our collective, cultural subconscious to be reformed. The problem is that an imprint has a particular shape, and the current imprints that most define American political leadership are masculine. This is part of why Schüssler Fiorenza thinks no woman has yet been elected president in this country. While Kamala Harris’s election as vice president is, on the one hand, a sign of progress, that secondary role also evinces a deep biblical imprint: the idea that women are helpers, not leaders (which can be found throughout scripture, from Genesis 2 to the household codes in the epistles).

Take Mary Magdalene as an example. Some early Christians called her an apostle to the apostles. But since Gregory the Great in the fifth century, she has been characterized largely as an exemplar of repentance. A woman who was a friend and confidant of the Lord, entrusted with the very first proclamation of the gospel on Easter morning, became the cultural imprint for immoral women and repentant sinners. What if Mary Magdalene as an apostle to the apostles had been allowed to imprint our ideas about women and leadership, courage and conviction?

Schüssler Fiorenza similarly questions the cultural imprints derived from the stories of several other biblical women, offering alternative interpretations. While I don’t agree with all of her interpretations, she shows us—as she has again and again throughout her distinguished career—how to do careful and creative biblical scholarship.

When it comes to marketing, Trump is no fool. He knew that he didn’t even need to read from the Bible; simply holding it would be enough to evoke some culturally imprinted parallel in many Americans’ subconscious. Schüssler Fiorenza invites us to consider why using the Bible as a prop worked for him—and why it will continue to work that way unless our cultural imprints are shaped by a different set of stories or interpretations.

Can the kind of careful interpretive work Shüssler Fiorenza does in this book find its footing solidly enough to make a cultural imprint that challenges the ones formed over hundreds of years in this country? I think those of us who call ourselves preachers must believe that this is possible. The belief that the words of scripture proclaimed through preaching might still make an imprint upon a congregation’s collective conscience renews the challenge to preach well. And not only to preach well, but first to interpret well.

A version of this article appears in the print edition under the title “The Bible, imprinted.”