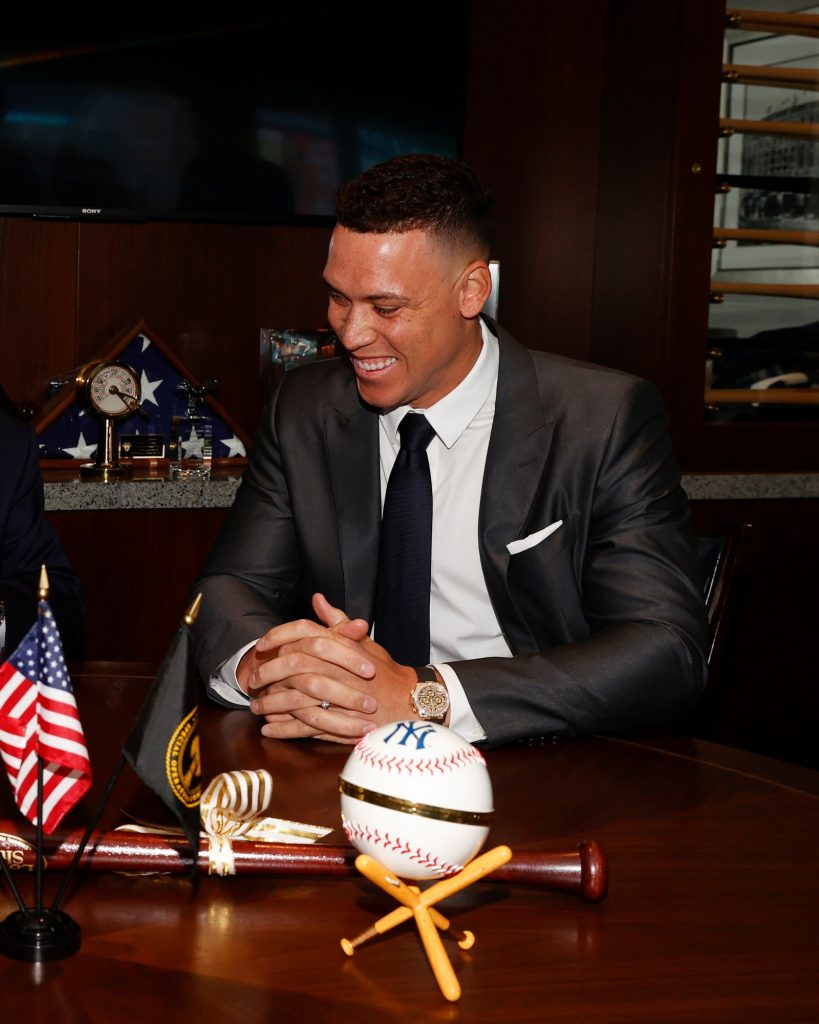 Well, it looks like we know where some of the money from that new nine-year, $360 million contract went. Aaron Judge didn’t wait to get a new watch—and he wore it to the press conference to formalize his new deal. Safe to say the slugger’s new piece is  a home r—just kidding. Let’s not joke around when discussing this version of the Daytona, nicknamed the “Eye of the Tiger.”

Judge’s “Eye of the Tiger” was first released in 2019, during the height of Daytona-mania. Just a year and a half after the record-breaking sale of Paul Newman’s Daytona, Rolex really turned the bling up on the red-hot model. The brand quietly released one version of the piece with a mother-of-pearl dial and orange sapphires, and another with a leopard-spotted dial. Then there’s Judge’s iteration—36 diamonds around the bezel…and 243 (!) more on the dial creating that tiger-stripe pattern. Despite all that bling, Rolex still went ahead and put the watch on its rubber Oysterflex bracelet, a reminder that it’s still a sport watch, just a little dressed up. I wonder if this counts as a joke in Geneva?

As baseball comes back to New York, it only makes sense that great timepieces would come with it. Over in Flushing, the Mets have their own grade-A watch collector in shortstop Francisco Lindor, who owns Royal Oaks and fancy-pants Pateks. Even Yankees skipper Aaron Boone got in on the action with some great pieces from Oris this year. As the contracts continue to swell—the Mets are doing their best Steinbrenner-era Yankees impression as of late—hopefully the watches will glow up accordingly. For now, we have Judge and his blinged-out masterpiece.

I knew I had a problem last Sunday. I was watching, arguably, the greatest World Cup final of all time. After every Mbappé magic trick, the camera would cut to French president Macron, sleeves on his white dress shirt rolled up, and I would think: Huh, I wonder what watch he’s wearing! The answer is a very handsome Bell & Ross. The watch is a simpler model from the brand, which typically plays with fun square cases. However, it maintains B&R’s aviation roots with those big legible numerals at 12, 3, 6, and 9 o’clock.

Speaking of World Cup watches! Argentinian hero Di María wore what we see most champions wear: a Rolex. He came home to celebrate Argentina’s victory wearing one of the Crown’s most coveted watches, the black-and-whtie “Panda”-dial Daytona. (Here’s a better look at it, next to the trophy.) This is the tried-and-true grail to Judge’s diamond-set showstopper.

Downey Jr.’s HYT uses a brave new method to tell the time: goo. The green liquid moves around the outer edge of the watch to mark the hour. For HYT, a brand that uses watches to make us think differently about our days, this time-telling process is meant to help the wearer visualize the flow of time. Also helpful in marking the passage of time? Shaggy headed Downey Jr. turning into bald Downey Jr. (for a TV role).

AP is in its blue period. For its 50th anniversary collection, the brand used multiple shades of blue—from navy to baby—to celebrate. After dropping versions of the ceramic watch in black and white, Audemars put one out in eye-popping blueberry this year. The brand finished 2022 off with this version of the Royal Oak that is a sapphire bomb. Recently, we’ve seen it on the wrist of LeBron James—and now, paired with a Messi jersey, Lowry.