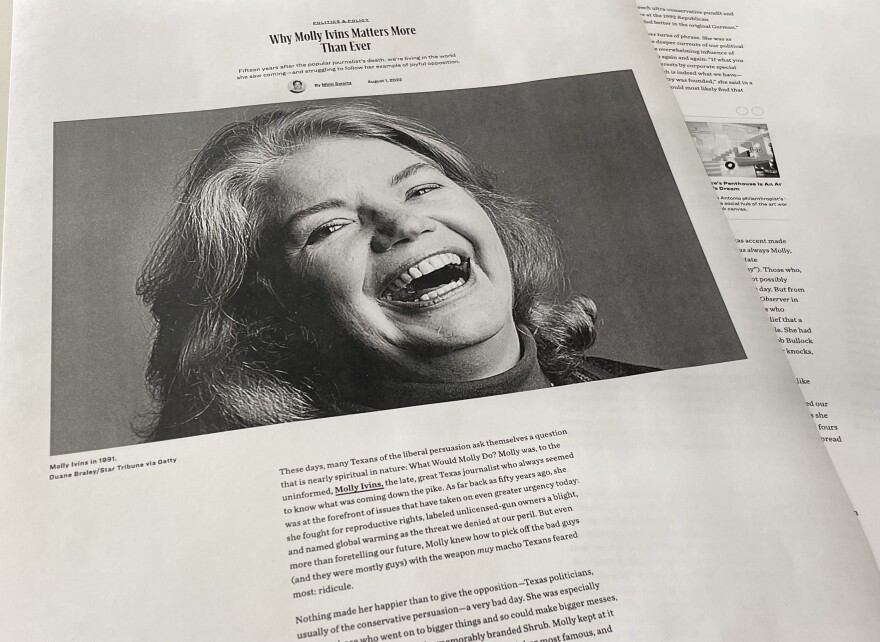 Syndicated columnist, humorist, author and political commentator and Texan Molly Ivins passed away 15 years ago. Mimi Swartz, the executive editor of Texas Monthly, recently wrote an article that looked back at Ivins, her career and her legacy.

Swartz recently spoke with TPR’s Jerry Clayton about the article. This conversation has been condensed and edited for clarity.

Clayton: How was Molly was on the forefront of issues 50 years ago that we’re looking at today?

Swartz: Absolutely. I’ve sort of taken that for granted. Someone in California pointed it out to me — she was particularly on the forefront of reproductive rights and gun control, or, as we now call it, gun safety and corporate money and politics. She was way on top of it, way ahead of everyone.

Clayton: In your article, you talked about how Molly always knew how to pick off the bad guys. What what’s one of your favorite examples of this?

Swartz: There was an ultra-conservative pundit and presidential candidate named Pat Buchanan, and he spoke at the Republican National Convention in Houston in 1992. And the speech was — at the time it would have curled your hair. Now, I’m not so sure, but Molly described it as saying that it probably sounded better in the original German, which I just loved.

But she also called Bill Clinton weaker than bus station chili. There’s another famous one. There was a particularly dumb Dallas state representative, and she said, “if his IQ slips any lower, we’ll have to water him twice a day.”

Swartz: Well, they were friends. I think sometimes there were certain periods when when Richards did some things more on the conservative side, and Molly took her to task for it. But I think there were a great bunch of women at that time who were sort of determined to have a good time and and laugh about the tough stuff, but still keep up the fight, I would say.

Clayton: What would you say about Ivins’ legacy in Texas?

Swartz: There’s another great quote that didn’t make it into the story. It made me think of Beto O’Rourke, actually.

She said, “Keep fighting for freedom and justice, beloved, but don’t forget to have fun doing it. Be outrageous. Rejoice in all the oddities that freedom can produce. And when you get through celebrating the sheer joy of a good fight, be sure to tell those who came after how much fun it was.”

And I think that’s great advice to keep fighting. But don’t forget, it’s fun whether you win or lose. It’s kind of fun to give those guys a bad day.

Clayton: So you knew Molly to an extent, is that correct?

Swartz: Yes. So I wrote about her. I did a longer profile of her.

Clayton: What do you think Molly would say about what’s happening in Texas today?

Swartz: I can’t imagine she wouldn’t despair. I know she would keep fighting, but I think she would be confounded at the takeover of the right wing in Texas to the extent that they have.

And I think, somebody like Louie Gohmert, she’d have a field day with.

I’m not sure what she’d do about Abbott or Dan Patrick. She’d have so many targets now. I’m not sure she’d know what to do with all of them.