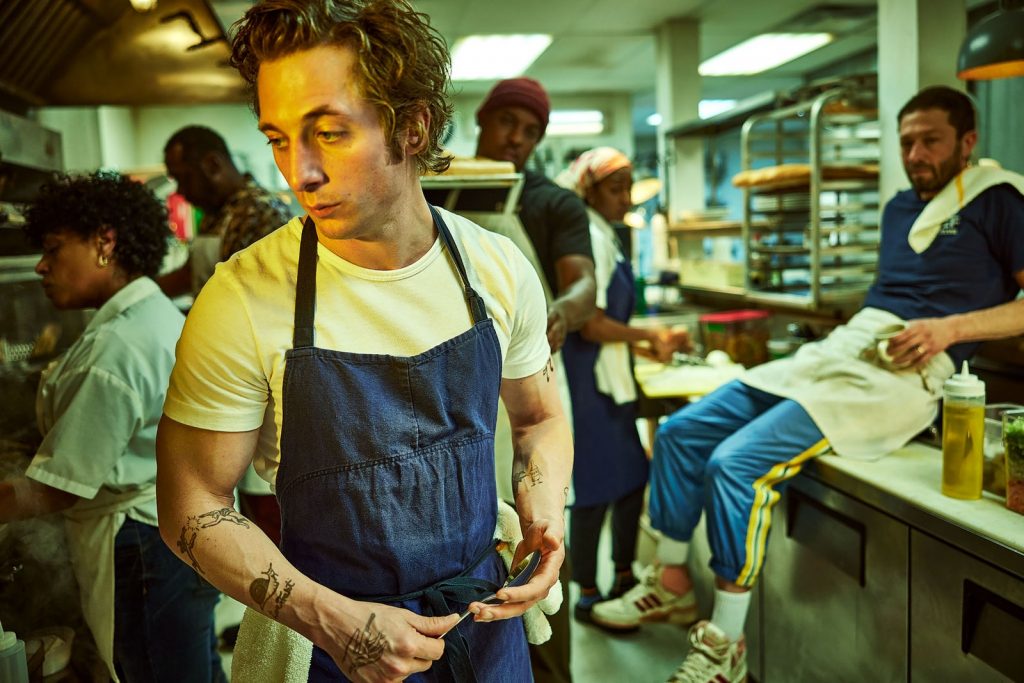 This wasn’t exactly intentional. “The chefs I’ve come across and met are some of the most stylish people in a way that’s so effortless,” Courney Wheeler, The Bear’s costume director for episodes two through eight. “It’s no surprise Carmy is as well given his background.” The kitchen backdrop is merely the crostini on which to serve a heaping portion of menswear pâté.

Cristina Spiridakis, who handled costumes for the show’s pilot, put it this way in an email: “It was never the intention to be ‘stylish’ per se—a white tee, black Dickies, and Birks is a common look amongst chefs. Carmy is a person that appreciates quality and classics, items that last, that aren’t fussy or trendy—things created with a respect for the item itself.” Classics, things that last, clothes immune from trends: these phrases feel borrowed directly from StyleForum posters (or the pages of this magazine).

Naturally, the show has become something of an obsession among menswear fans. Identifying those perfectly crisp white T-shirts became a group project. Jake Woolf, a GQ contributor who runs a popular menswear TikTok account, pinned the tees as Velva Sheen. On Reddit, James Harris of the Throwing Fits podcast wrote, “From the creators of the show: ‘Velva Sheen and the Mens Brando shirts, plus the supreme white hanes.’” All this detective work became the basis of a story dedicated to Carmy’s shirts on The Strategist. Spiridakis confirmed that Carmy wore Supreme x Hanes, but clarified that he never actually wore Velva Sheen. Instead, Spiridakis said, he wore Merz b. Schwanen’s 215 tee and Japanese-made Whitesville tees.

And although Carmy is soaking up most of the style spotlight, he’s not the only one taking menswear seriously in The Bear. Ebon Moss-Bachrach, who plays aggro “cousin” Richie, said in an interview with the menswear newsletter Blackbird Spylane that he was similarly invested in what his character would wear. He and the costume designers were on the same page about Richie’s Adidas high-tops, wonderfully swishy track pants, and Richie’s black Members Only jacket you could spend a lifetime thrifting for. “​​It’s at least 20 years old and the shoulders are still so stiff,” Moss-Bachrach said. “You could balance crates on them.” Even the restaurant merch Richie wears looks like something Pete Davidson would stan.