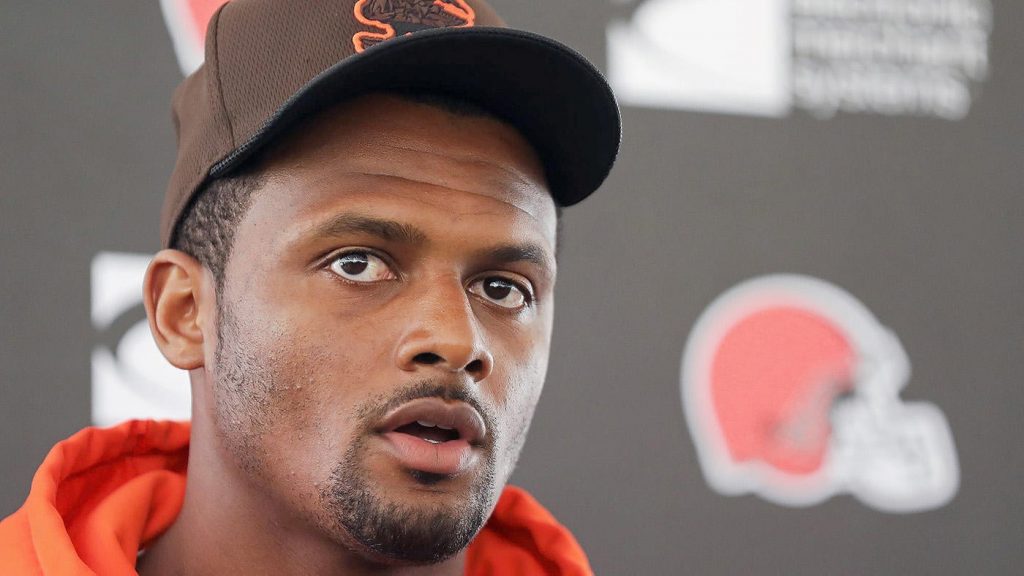 The NFL and NFLPA reached a settlement on Thursday relating to Browns quarterback Deshaun Watson discipline for violating the league’s personal conduct policy. Watson is suspended for Cleveland’s first 11 games of the regular season without pay and fined $5 million. He must also undergo a mandatory evaluation by behavioral experts and follow their treatment plan.

The settlement is the final resolution of the disciplinary process, ending the NFL’s appeal of the six-game suspension without a fine disciplinary officer Sue L. Robinson, who was jointly appointed by the NFL and NFLPA, had imposed on Watson. Robinson found Watson in violation by engaging in sexual assault, conduct that poses a genuine danger to the safety and well-being of another person and conduct that undermines or puts at risk the integrity of the NFL in her 16-page ruling. The settlement prohibits the NFLPA from pursuing legal remedies through the federal court system.

Prior to the settlement, the NFL had been seeking an indefinite suspension where Watson could apply for reinstatement after a year from Peter C. Harvey, who had been selected by commissioner Roger Goodell to handle the appeal. The 11-game ban is the longest suspension ever imposed under the personal conduct policy for sexual misconduct. What is unknown is whether Robinson’s mandate that Watson’s massage therapy to be limited to team-approved massage therapists for the rest of his career remains. Watson’s punishment is in line with what the NFL was seeking in settlement talks that took place before Robinson’s decision. The NFLPA rejected the NFL’s reported offer of a 12-game suspension and a $10 million fine.

Watson’s suspension goes into effect on Aug. 30 when the final roster cutdown to 53 players takes place for NFL teams. Under the NFL’s collective bargaining agreement, Watson will be allowed back in team facilities and permitted to participate in limited activities during the second half of a suspension on terms similar to players who are suspended under the NFL’s performance enhancing substances policy. On Oct. 10, the day after the Browns’ Week 5 contest against the Chargers, his permissible activities will include attending team meetings, individually working out with the Browns’ strength and conditioning coach, meeting individually with Browns head coach Kevin Stefanski, offensive coordinator Alex Van Pelt and quarterbacks coach Drew Petzing and getting treatment/rehab from the Browns’ medical staff and trainers. Watson will able to practice during the last two weeks of the suspension beginning on Nov. 14. The suspension will be lifted on Nov. 28. Watson will be eligible to play in the Browns’ Week 13 game against the Texans, Watson’s former team, on Dec. 4. His return will be in Week 13 instead of Week 12 because Cleveland has a bye in Week 9.

Many of the other NFL teams feel that the fully guaranteed, five-year contract worth $230 million Watson signed in March as a part of his trade from the Texans was structured in a manner that was designed to minimize the financial consequences of the suspension. Without pay pertains to base salary with suspensions. Watson received a $44.965 million signing bonus and his 2022 base salary is $1.035 million, his league minimum base salary in the deal. He forfeits $632,500 (or 11/18ths of his $1.035 million 2022 base salary) since he earns $57,500 each of the 18 weeks in the regular season.

The Browns will get $632,500 of 2022 cap relief from the base salary Watson won’t earn because of the suspension. Presumably, the $57,500 from the Week 9 bye will be handled like suspensions under the NFL substance abuse policy. It should get paid in equal installments over the remainder of the season after Watson serves his suspension. Watson’s contract doesn’t toll with his 11-game suspension. His contract years will run as intended, meaning his deal ends after the 2026 season. His 2023 through 2026 salary cap numbers will each remain at $54.993 million ($46 million base salary and $8.993 million in signing bonus proration).

None of Watson’s $44.935 million signing bonus is in jeopardy, thanks to language in the contract. Watson’s salary guarantees won’t void either. Contract guarantees typically void for an exhaustive list of defaults by a player. Upon voiding, the player would still have the opportunity to earn the salary that is no longer guaranteed on a non-guaranteed basis.

The relevant language about Watson’s signing bonus is as follows:

” … a suspension by the NFL solely in connection with matters disclosed to Club in writing pursuant to Paragraph 42 which results in Player’s unavailability to Club solely for games during the 2022 or 2023 NFL League Years shall not subject Player to forfeiture of Signing Bonus.”

Without this language, the Browns would have had the right to ask Watson for one-eighteenth of the $8.993 million of signing bonus attributed to the 2022 salary cap for each week of the 18-week regular season missed with the 11-game suspension. The Browns would have had the ability to recapture $5,495,722 (or 11/18ths of $8.993 million) from Watson.

The pertinent language keeping Watson’s guarantees from voiding is below:

“…it shall not constitute a failure or refusal to practice or play with the Club and Player shall not be in default if: … (iii) Player is suspended solely in connection with matters disclosed to Club in writing pursuant to Paragraph 42 which results in Player’s unavailability to Club solely for games during the 2022 or 2023 NFL League Years.”

The language is significant because it prevents the Browns from potentially getting out of the contract without massive cap consequences because of misbehavior that was known prior to the trade. In other words, the Browns can’t exit the deal because of accusations stemming from the personal conduct policy suspension. Practically speaking, the Browns wouldn’t have during the early part of the contract if possible after giving up 2022, 2023 and 2024 first-round picks, a 2022 fourth-round pick, a 2023 third-round pick and a 2024 fourth-round pick to get Watson and a 2024 sixth-round pick.

The suspension puts to bed a 17-month ordeal that won’t be easily forgotten. Watson still maintaining his innocence Thursday despite Robinson calling his conduct predatory and “more egregious than any before reviewed by the NFL” is overwhelmingly considered disappointing. Last week’s apology rings hollow and seems like something he made specifically so a settlement could be reached.