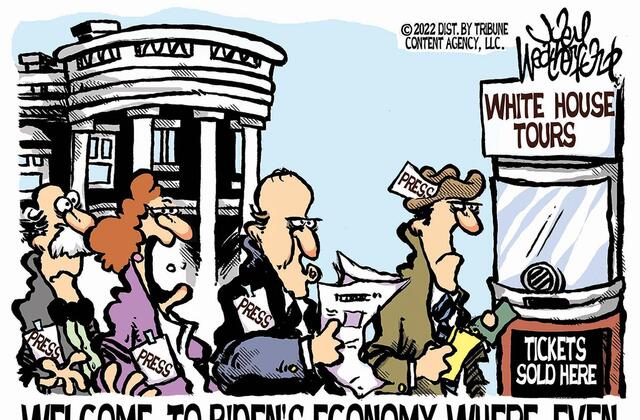 JUNEAU, Alaska (AP) — Alaska voters are facing an election unlike any they’ve seen, with 48 candidates running to succeed the man who had held the state’s only U.S. House seat for 49 years.

While some of the candidates in this week’s special primary have name recognition, including Sarah Palin and Santa Claus — yes, Santa Claus — many are relative unknowns or political novices — a fishing guide, a contractor, a gold miner who went to prison for allegedly threatening federal land managers.

The huge number of candidates and the short timeline for holding the election after Republican U.S. Rep. Don Young’s death on March 18 has some voters overwhelmed and scrambling to learn more about their options. This will be the first election under a system approved by voters in 2020 that ends party primaries, meaning all candidates are on the same one-page ballot.

The four candidates who win the most votes will advance to an August special election, in which ranked choice voting will be used. The winner of that contest will serve the remainder of Young’s term, which ends in January. A separate set of elections later this year will decide who serves a two-year term beginning in January.

Max Sumner, a general contractor from Wasilla running for the seat as a Republican, said he’s as serious about his bid “as anyone else that knows they aren’t going to win.” He said he was interested in being part of the “first experiment” under the new elections process and in saying he had run for Congress.

“I don’t agree with the government being run by career politicians. I think it should be like a couple terms and you’re out,” he said.

He said he voted for himself and is asking others to do so but isn’t campaigning. He said he’s also pulling for another Republican in the race, Josh Revak, a state senator who was co-chair of Young’s reelection campaign and has been endorsed by Young’s widow.

In all, there are 16 Republican candidates including Palin, a former Alaska governor; Nick Begich, a businessman from a political family of prominent Democrats; former state lawmaker John Coghill; and Tara Sweeney, who also was a co-chair of Young’s campaign and who has been endorsed by a group representing leaders of the state’s influential Alaska Native regional corporations.

Nearly half the candidates running, 22, are independents. That includes Al Gross, an orthopedic surgeon who ran for Senate in 2020 with support from the state Democratic party, and a self-described “independent, progressive, democratic socialist” whose legal name is Santa Claus and who serves on the city council for the community of North Pole.

Gross angered some Democrats when in an interview with the Anchorage Daily News he didn’t commit to caucusing with Democrats if elected. He has since said he would. The Alaska Democratic party has urged voters to pick from one of the six Democrats running.

The closest a Democrat came to beating Young in the last 20 years was in 2008, when Young won 50% of the vote and Ethan Berkowitz 45%.

“Alaskans have this propensity to vote for status quo, gauge viability, vote for the devil you know, and I really think under this new system, especially with ranked choice voting, we have an opportunity to change” that dynamic, said Lindsay Kavanaugh, the Alaska Democratic party’s executive director.

Revak released a video in which he says he’s “waging a war on Santa” and his “Marxist fantasies.” Revak’s campaign said the video was meant to be light-hearted, but Claus said he isn’t running as a joke.

Claus’ candidacy and particularly his support of abortion rights caught the attention of voter Sandi Hicks, a Juneau independent. She last month sought advice on a community Facebook page about where to find candidate information. Commenters shared links to news sites, including one that posted candidate surveys.

Others on her short list include Gross; Democrat Mary Peltola, a former legislator; and independent Jeff Lowenfels, a gardening expert with a legal background, including as a former assistant attorney general.

“I’m feeling like I’m more comfortable about, you know, instead of 48 people, I’m down to three or four people,” Hicks said.

Around 100,000 ballots already have been returned in what is primarily a by-mail election. That is more than the 88,817 cast in the 2016 regular primary, when turnout was just 17%. It’s anyone’s guess how many of the ballots sent to registered voters will be returned.

There are opportunities for in-person or early voting in around 165 communities, many of them rural, where mail service can be spotty. The state Division of Elections and advocacy groups have been working to educate voters on the new elections process, including reminding them they only pick one candidate this go-round.

The division’s online candidate list includes contact information and links to candidate websites, for those who have them. One candidate, Republican John T. Callahan, has a website simply featuring a quote often attributed to Civil War General William Tecumseh Sherman: “If nominated, I will not run. If elected, I will not serve.”

Libertarian Chris Bye said his candidacy began with him and others complaining about Congress and challenging each other to run. He decided to go for it. He is one of the few candidates, including Begich and Democrat Christopher Constant, who began running for the House before Young’s death.

Bye, who said he quit his job with the military to run, calls himself a “normal dude.” He said he works in retail and as a fishing guide and that Congress needs people like him.

“I believe that typical Alaskans can make better decisions than groomed or professional politicians, period,” he said.

Coghill, whose late father was heavily involved in Alaska politics, said he’s “sorry” there are so many candidates “because it makes it more confusing (in) a very confusing election.”

Name recognition in this race is important, he said.

Adam Wool, a state lawmaker running as a Democrat in the race, said the election reminds him of the online poll in Britain years ago in which people were asked what the country’s new polar research vessel should be called. The runaway winning suggestion: Boaty McBoatface.

“This election has a little bit of that going for it, with a bunch of people that we don’t know and people with funny names and celebrity-type candidates, like Sarah Palin,” he said, adding that he doesn’t want the election to turn into one where people make choices for “shock value.”

“I don’t want (voters) to Boaty McBoatface the Alaskan election,” he said.