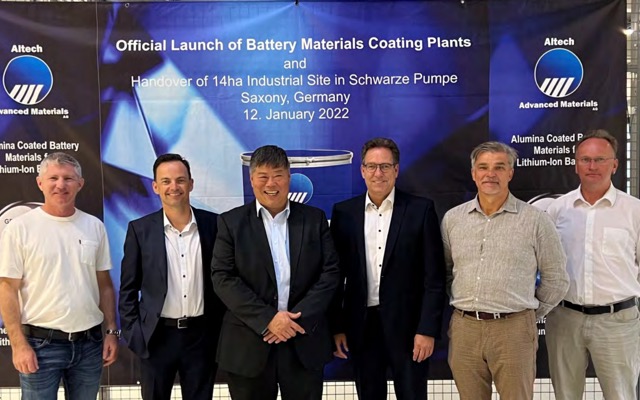 Perth-based Altech Chemicals (ASX: ATC) has reported “outstanding” results from a preliminary feasibility study (PFS) on the development of a 10,000 tonnes per annum silicon graphite alumina coating plant in Germany.

The plant will be constructed by Altech Industries Germany to produce high-capacity silicon graphite battery materials known as silumina anodes, under exclusive license from Altech for supply into Europe’s electric vehicle market.

With a capital investment of US$95 million, Altech estimates a project net present value of US$507 million and net cash of US$63 million per annum generated from operations.

The internal rate of return is estimated at 40% with investment capital paid back in approximately 3.1 years.

Total annual revenue at the full rate of production is estimated to be US$185 million per annum.

“The silumina anode project represents an exciting downstream opportunity for us to utilise our HPA coating technology in silicon graphite batteries,” he said.

“Due to the attractive PFS economics, we have decided to immediately progress to a definitive feasibility study [as] we believe the production of silumina anode materials could be a game changer for the lithium-ion battery industry.”

The proposed silumina anodes plant incorporates a main production building and three ancillary buildings (administration and engineering; a guardhouse; and maintenance workshop and stores) based at the Schwarze Pumpe Industrial Park in Saxony.

Engineering work has begun on a pilot plant to demonstrate the technology and is set to produce up to 36,680 kilograms of coated anodes per year.

Altech announced during the quarter that an updated mineral resource estimate prepared by Geos Mining for the Kerrigan kaolin project showed an inferred amount of 125 million tonnes at an ISO brightness of 85.2%.

It represents a 47% increase on the original estimate by Geos in 2011 which totalled 85Mt at 85.1% brightness.

The new estimate is based on follow-up drilling at the deposit to verify earlier results and obtain samples for test work and analysis.

The Kerrigan deposit is located in Western Australia’s central wheatbelt region and was granted in 2015.

The single exploration licence sits across 480 square kilometres and is wholly-owned by Altech.

“Currently the kaolin feedstock required for the Johor plant is supplied from our Meckering deposit, which has a life of mine of more than 250 years,” Mr Tan said.

“Kerrigan has been developed as a separate standalone kaolin project which we will be looking to divest if an attractive offer is forthcoming.”

Silicon has 10 times the energy retention capacity of graphite and has been identified as the most promising anode material for the next generation of lithium batteries.

The swelling of silicon particles during battery charge has traditionally been a critical drawback to the use of silicon in commercial lithium-ion batteries, due to the potential for fracturing and battery failure.

Silicon is also reported to deactivate a high percentage of lithium ions in a battery, immediately reducing performance and life.

Last year, Altech announced it had cracked the “silicon barrier” and could achieve a 30% higher retention rate in a lithium-ion battery with improved recharging capacity and battery life.