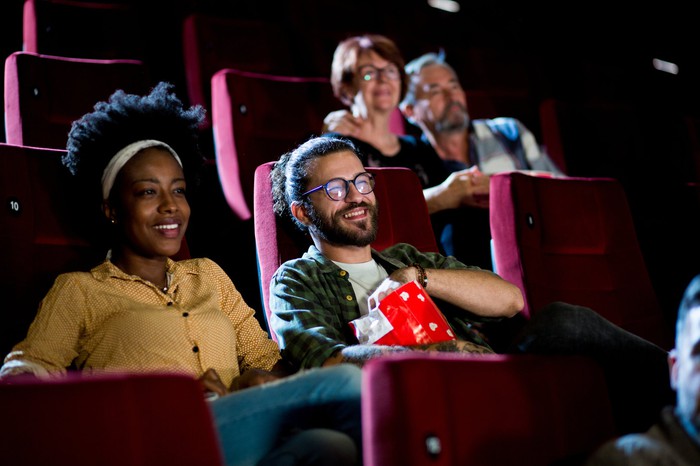 Crowds are gathering at the multiplex this summer, and that’s naturally great news for AMC Entertainment (AMC -4.60%). Audiences have rediscovered the silver screen when a big movie comes out, but lately it’s been a team sport on the supply end. At least five movies topped $10 million in domestic ticket sales this weekend. We saw the same thing happen a week earlier, but you have to go back to mid-February of 2020 — more than 28 months ago — to find the last time before that when at least five films clocked in with eight figures in box office receipts.

The cherry on top this weekend is that Comcast (CMCSA -2.25%) subsidiary Universal’s Minions: The Rise of Gru shattered the record for a film during the Fourth of July holiday weekend. The Comcast flick more than doubled the ticket sales garnered by the debut of Disney‘s (DIS -2.17%) Lightyear last month, confirming that young families are still heading out to the corner multiplex for full-length theatrical animation.

Things aren’t perfect at AMC. The share count has popped fivefold for the country’s largest exhibitor since the pandemic began. This will also likely be its fourth year in a row where it posts an annual loss. However, with short interest inching higher and consumer trends improving, you may want to think twice about betting against AMC Entertainment.

There are too many potentially positive headlines coming out this summer, fueled largely by a stacked pipeline of compelling theatrical releases. This holiday weekend was robust. Domestic box office receipts of $226 million is the highest we’ve seen since late 2019. Things should get even better this weekend when Disney’s Thor: Love and Thunder tosses its hammer into the ring.

The healthy spigot of content is huge. There’s no longer just one or two movies drawing folks to the local cinema. If the film you want to see is sold out, there are plenty of reasons to stick around and fill another seat. A multiplex operator can’t just turn over a large percentage of its screens to a hot release, snuffing out long-term demand. Business is getting back to normal for theater chains, and things should be even better for AMC.

It’s not just about ticket sales. The concession stand is where the high-margin revenue is made for multiplex operators, and AMC is thriving on that front. Consolidated food and beverage revenue per customer is clocking in 40% higher than it was in 2019. AMC ramping up mobile ordering across the chain has helped boost advance purchases of snacks and drinks.

Long-term concerns for the largely leveraged movie theater stocks remain in this environment with rising interest rates, and the flow of potential blockbusters will slow in the back half of the summer season. However, with AMC stock trading more than 80% below the highs it hit 13 months ago and short interest at its highest point in more than a year, it won’t take a lot of positive developments to give the industry leader a Hollywood ending.