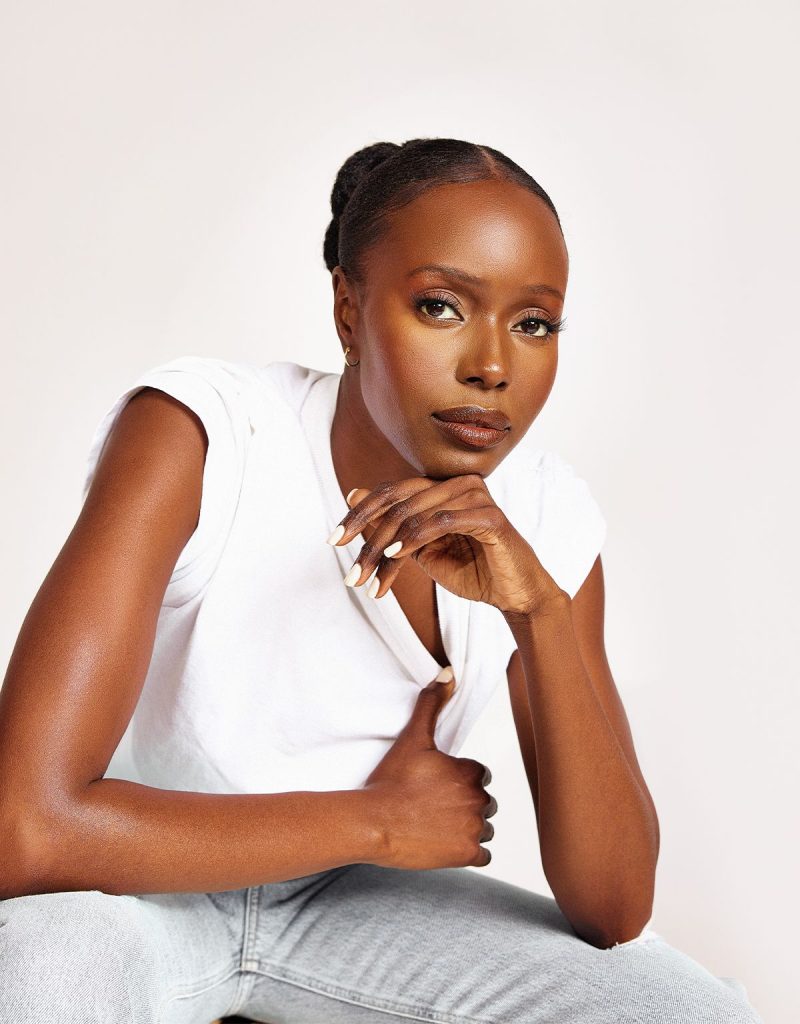 The universe has a funny way of bringing things full circle. For actress Anna Diop, finding her way to the film Nanny was one of those moments. It started a couple of years back when a writer on the show Titans emailed her about an exciting new filmmaker named Nikyatu Jusu. He thought she could be the next Barry Jenkins and encouraged Diop to check out her work. She watched Jusu’s short film Suicide by Sunlight and was blown away. “I was so taken by the originality of the story—the way that it was told through this dark genre, the social issues she was contending with in the story, the characters. Just across the board, I was really impressed with this filmmaker,” she says from a hotel room in New York City. Diop sent Jusu’s stuff to her reps hoping to connect, but nothing came of it. Two years went by. Then, Nanny appeared in her inbox. Jusu was looking for her lead, and she wanted Diop to read for it.

Nanny premiered at this year’s Sundance Film Festival, where it nabbed the coveted Grand Jury Prize (it is the first horror film in the festival’s 44-year history to do so, and Jusu is only the second Black woman to win the honor), and Diop’s excellent central performance has received immense critical praise. The film is a poignant look at the immigrant experience, centering on a young Senegalese woman named Aisha (Diop) who takes a job as a nanny to a wealthy family in hopes of bringing her son to the United States. But when a violent supernatural presence begins to haunt her dreams and creep into her reality, it threatens everything she’s worked for.

“We haven’t seen many films focused on an individual that is outside the primary part of our Western society,” Diop says of what initially attracted her to the film. “This is a woman who is a domestic worker and an immigrant, and it excited me that we were doing a project that was focused on her, that the gaze was on her, that it was depicting the nuances and complexities of her humanity.” There was a lot for Diop to connect to personally too. The actress herself is Senegalese. She immigrated to the U.S. at a young age with her mother, who worked as a nanny. Growing up, she was surrounded and raised by women who worked these jobs, and she experienced firsthand what it is like to survive in spaces that weren’t built for her.

Aisha is someone Diop deeply related to, and when I ask what was important for her to show audiences with her portrayal of the character, she tells me that what was written in the script was already so rich. “[Jusu] really wrote a full person,” she says. “You see Aisha fall in love. You see Aisha in moments of loneliness and depression. You see her love for her child. You see her try to navigate the craziness that is Amy. You see her love a child and take care of a child that isn’t her own.” With so many layers already on the page, it was Diop’s job to make each of those moments honest and full, which she does triumphantly.

Interestingly enough, before Diop was attached to the project, Aisha wasn’t specifically Senegalese yet. Jusu had always planned to tweak the script to fit whatever actress would play the part, so when Diop signed on, she updated the role to fit the specificities of Senegalese culture.

Having spent most of her life in the U.S., the actress had to work at finding her Senegalese accent, so she enlisted the help of a professor and linguist in Senegal to find the right balance. “I couldn’t just do a true full-Senegalese accent because people would struggle to understand,” she shares. “But luckily, it still made sense for Aisha’s character because she’s very educated and has been studying English for a very long time, so we still found what was true but also clear enough.” Diop worked with the dialect coach for three to four hours every day for two weeks leading up to filming.

Additional prep included creating music playlists that Aisha might have listened to. Think lots of old-school soulful and spiritual Senegalese music mixed with some newer Senegalese artists and a little bit of Lauryn Hill. There was also the unique tactic she employed to understand Aisha’s various states of psychosis throughout the film.

“I bought four large cork boards and hundreds of flash cards,” she tells me. “I had pink ones and blue ones. The pink ones were the ones where she was having a normal moment where she knows she’s sane and everything is fine, and I wrote down the event of that scene. ‘Aisha walking down the street. She’s about to board the subway.’ Okay. ‘Aisha meets Malik. They flirt.’ Okay. And then in blue, I wrote all the moments where she’s not sure what she’s experiencing is reality or what the fuck is going on. ‘She finds herself in a pool drowning in water.’ ‘She finds herself suffocating from a sheet.’ All of those moments, I put it all on the boards, and what I saw was, at the beginning of the board, you see a little bit of blue here and there, a little sprinkle. And then as the film progresses, you see more and more blue and the ascension of her insanity and madness. That helped me because we shoot out of sequence. So before my day would start, I’d be like, ‘Okay, we’re doing scenes 13, 49, and 12. I’m sane. I’m sane, but I’ve experienced this much blue, so I’m this much deranged or confused about what’s going on.”

The slow burn of a young woman on the cusp of losing her mind is what makes the psychological thriller so enthralling to watch. That and the beautiful cinematography by Rina Yang. Moving through dreamlike states and the real world, the blue- and yellow-tinged lighting creates an eeriness, and scenes involving bodies of water are deliciously haunting.

It was Jusu’s intention to mix an American immigrant story with genre as a way to create more entry points for people to find the film. Coming off its award at Sundance and its premiere at TIFF, the success of Nanny has the potential to open doors for more projects like it. “I hope it inspires people—filmmakers and writers that have those stories inside of them that they want to tell, that they are afraid won’t get the attention or won’t sell. I hope it inspires them to want to tell those stories and encourages them to tell those stories,” Diop says. She also hopes the film elicits a larger understanding from audiences of how we benefit from these types of workers who are often invisible and how their existence within our society helps us to do the things we do. “I hope it expands people’s empathy and also their perspective of their places in the world,” she adds.

This kind of original and impactful storytelling is what drives Diop as an actress. She describes herself as an actor’s actor, one whose education of the craft is never finished. There was a summer Shakespeare course at Oxford, then a famous acting teacher in New York and a range of studios in L.A. She has read every book she can get her hands on. “I never wanted another actor to know about another technique that I don’t know about,” she admits. The result is a successful 16-year career. But at 34 years old, there’s so much more she’s eager to take on. “Across the board, across race and cultures, filmmakers … are telling new stories and in sometimes new ways that are mixing genres or playing with new genres. That makes me really excited, and I hope to be a part of their orbits,” she says. Universe, are you listening?