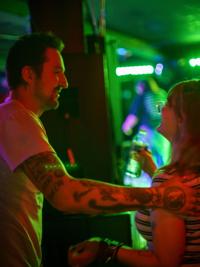 When local singer-songwriter, Pepper Kit, opened Koot’s main stage last Saturday for English singer Frank Turner, it was for her a moment of validation.

“At the end of that, to have so many people come up to me and share how impactful my music was for them, that’s really the entire point of what I’m doing,” said Kit.

It was also the culmination of a journey she, unknowingly at the time, set herself on four years prior. It is a journey with an unlikely story – a story that embodies the healing power of music and its ability to both inspire and connect people separated worlds apart.

Until about four years ago, Pepper Kit, 40, wasn’t doing anything in music. She was, and still is, Katie Judge, wife, and mother of three. Her story arc revolved around the raising of her family. “I pretty much didn’t do anything with music for like 12 years after college. My kids were little, and I was busy raising them […] I picked up my ukulele seriously in the fall of 2018 and that’s when things really kicked off for me,” she explained.

It was that decision to pick up her instrument and re-engage music with intention, and heart, that set her on this path. It was a decision bereft over the 2018 passing of Indie rocker and Frightened Rabbit frontman, Scott Hutchison, who took his own life at the age of 36. Citing Hutchison and Frightened Rabbit as both her favorite band and biggest musical inspirations, Hutchison’s death was to Pepper, “surprisingly devastating.” It left a void, a void she sought to fill with music.

The effects of Hutchison’s death were not only deeply felt they were far-reaching. Of the many inspired by Hutchison’s music was Frank Turner. It was here, in the process of her own healing, while searching online forums for like-minded fans who were also mourning Hutchison, where Pepper discovered Frank Turner’s cover tribute of Frightened Rabbit’s 2008 release, Modern Leper.

And thus, the framework of this story is laid: Two musicians, living worlds apart, bridged together by their love of music and the musician who inspired them both.

Before I met Pepper Kit, I met her eyes–these piercing saltwater blues that were looking right back at me from a pinned Instagram photo on her @pepperkitmusic account. It was a photo portrait and the cover of their new EP cover, Stranger, which drops Friday, July 29th.

Scrolling through her profile, the expressive quality of Kit’s eyes and the way they communicated an array of emotions ranging from joy and confidence to vulnerability and questioning was indelibly striking. My time spent as a photographer the past 15 years have trained me to be adept to how the eyes communicate. And later, when I had a chance to listen to Kit’s music, I would discover these very same emotive feelings expressed in her music.

Understanding Kit’s music requires the listener to find what inspires it. In truth, you can’t understand Kit’s music without knowing her story.

Pepper Kit was raised in Sacramento, California. It was a home with a piano, a piano she was classically trained on. While Kit didn’t take to the piano with great ardor, she certainly learned from it. It was the foundation of her understanding of musical theory and her ability to read and later write music.

“I think singing was always in my blood, and I always connected with that. I just didn’t really connect with piano, probably because I was learning classical songs and not ones I could sing along with. So, the two were disconnected. I think I’ve connected with music more after picking up ukulele, and then the guitar. I have a lot more control over what I play and sing, and so there’s more passion behind it. I can really lose myself when I play, and that’s an incredible feeling,” she explained.

Beyond the piano, Kit was raised under what she describes as a ‘very authoritarian and very conservative-Christian’ household. It was a home of extreme ideology, zealotry, and its marginalization of women. It inflicted her with childhood traumas that left her with emotional scars she still bears. Yet it is from here, under the weight of that trauma, where Pepper found her voice. It is a voice that confronts those traumas head-on through the intertwining of meaningful lyrics and catchy melodies and whose purpose is both ‘connection’ and ‘healing.’ This is the heart of Kit’s music – a genre she categorizes as Sad Girl Pop Rock.

“I saw a little girl at the farmers market the other day, this little blonde girl that looked exactly as I did as a kid. So, I’m watching this little girl as I’m singing this song which are the lyrics, I wrote in the second verse of ‘Fall’, a song I wrote now as an adult to myself as a kid,” said Kit.

‘Oh, if I could tell her the truth

She’s braver and kinder than she knows

Pepper Kit’s new EP, Stranger, is a 5-track exploration of music and theme that ranges from catchy pop to lyrics of reclaiming her own trauma. And in speaking with Pepper about her EP, she spoke with love and intention but also a deep appreciation of the work of producer Brock Dittus and mixing engineer James Glaves put into her EP to help her realize her self-promise of, “If I am going to do this, I have to do it well.”