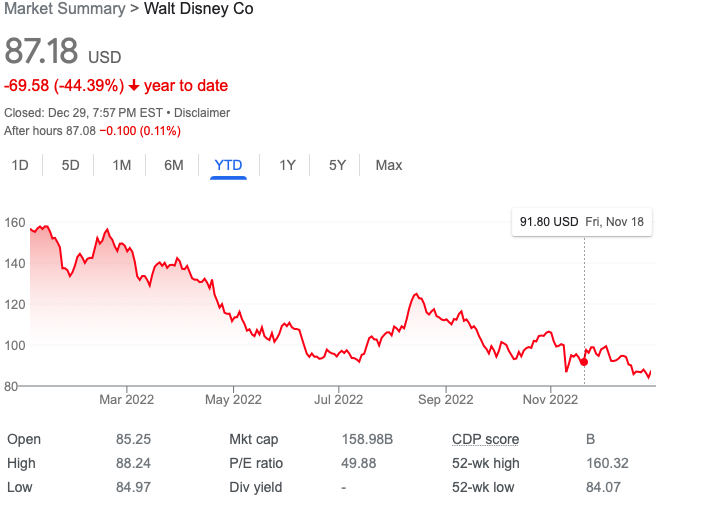 I thought I knew pain by the end of 2021, that I could recognize and identify it and see it coming from a distance – and duck.

My personal annus horribilis lined up with the one that played out for media and entertainment and, by the way, women all over the country. RIP Roe v. Wade and what we used to revere as the Supreme Court.

Losing my mother to COVID at the turn of the year to 2022 – a week after my daughter’s wedding – was the blow that came in slow motion. The loss of a close personal relationship (no further details here, but hey, love sucks) was a blow from the blue. Fully four of us in TheWrap family said goodbye to parents this year who weren’t supposed to go just yet.

All that paled beside the ongoing drumbeat of young people dying by suicide or from drug overdoses. We’ve sadly become accustomed to headlines of people dying in their 20s, or their 30s, a terrifying trend that seems to touch rich and poor, famous and unknown alike. The suicide rate and total number of suicides increased in the U.S. by approximately 4% from 2020 to 2021, the most recent statistics available from the Centers for Disease Control. Overdose deaths went up by 15% in that same period.

Little wonder, then, that as a whole we are fearful, anxious, careworn – and braced for bad news. When that bad news came in 2022, we were already worn down by the previous two years of sickness and lockdown and pandemic — and Hollywood had no more game face left.

When that fateful Netflix earnings report came in April, indicating a shocking drop in subscribers and predicting more backsliding to come, the deluge commenced. Suddenly investors lost faith in the entire streaming business model, just after a half-dozen entertainment companies had leaped headfirst into its deep end.

Fear gripped Wall Street, and stocks plunged across the board. As a result, entertainment companies like Netflix began to beat a hasty retreat on spending, and just as hastily greenlit an advertising tier that they had sworn would never, ever happen.

Meanwhile, Disney made misstep after misstep, including overspending vastly on Disney+ and insulting the entire LGBTQ community with a botched approach to Florida’s Don’t Say Gay law. By the time the Disney board threw in the towel on CEO Bob Chapek and begged ex-CEO Bob Iger to come back in November, the year was a goner. The stock is still down 45% year to date.

At the same time, Warner Bros. Discovery discovered that it would have to cut and cut and cut its way to financial sanity, after taking on $50 billion in debt. This meant shedding thousands of staffers, pulling the plug on movies and shows that were in production and others already on its streaming platform – pissing off both consumers and the creative community.

While the streaming industry reeled, the box office was still crawling its way back to health. The year is expected to end with about $7.35 billion in ticket sales from the U.S. and Canada, according to analysts and studio estimates, down 35% from the pre-pandemic year of 2019. Maybe moviegoing will improve next year with a more robust pipeline of movies, but I doubt it will roar back to previous highs.

The only saving grace in the humbling of these behemoths is that…. much of the tech industry had it worse. Facebook’s value plunged as the metaverse appeared to be stillborn, an embarrassing turn for Mark Zuckerberg, who only a moment ago was one of the richest and most powerful men on the planet.

We all know the ongoing drama that quickly engulfed Twitter after last month’s takeover by Elon Musk – who started the year as the richest man in the world. The company has shed nearly 75% of its workforce as Musk has started running day-to-day operations in public, and into the ground.

Meanwhile, TikTok became a target of bipartisan suspicion in Washington, with Federal Communications Commission commissioner Brendan Carr calling for a ban in the U.S. and legislation proposed to do just that.

And by the time the end of December rolled around, it seemed that ChatGPT – the very clever AI tool – might endanger the other tech Goliath, Google, by replacing search.

So, it’s bad all over. The depressed stock prices have frustrated Hollywood’s top executives, but for the thousands of employees who have lost jobs this year, the problems are more immediately existential.

I will spare you the litany of stories I hear from those who have lost their jobs. It’s a peculiarly Hollywood tic to maintain a posture of “I’m doing great!” when one clearly is not. Many had already been forced to adapt to the gig economy and its uneven wages, but life as a free agent sure ain’t the same as having craft services at the ready.

The year also brought us fresh reminders of the chaos that has been driving us to the brink for nearly three years now, from Harvey Weinstein’s second rape trial in L.A. to Donald Trump’s declaration of another presidential run, or from the COVID virus’s third strain to Southwest Airline crapping out on the whole country on Christmas Eve.

It’s enough to make you believe in the universe tilting toward a certain destiny.

But the pendulum in life does swing. I’ll say it’s time for a swing back toward better times. For the moment, I’m going to guess that caution and conservatism will be the byword in Hollywood and probably elsewhere as we gingerly step into the uncertainty of 2023.

Also Read:
2022 Was a Year of Hard-Earned Lessons for Streamers – Here Are the 5 Biggest Ones | Charts