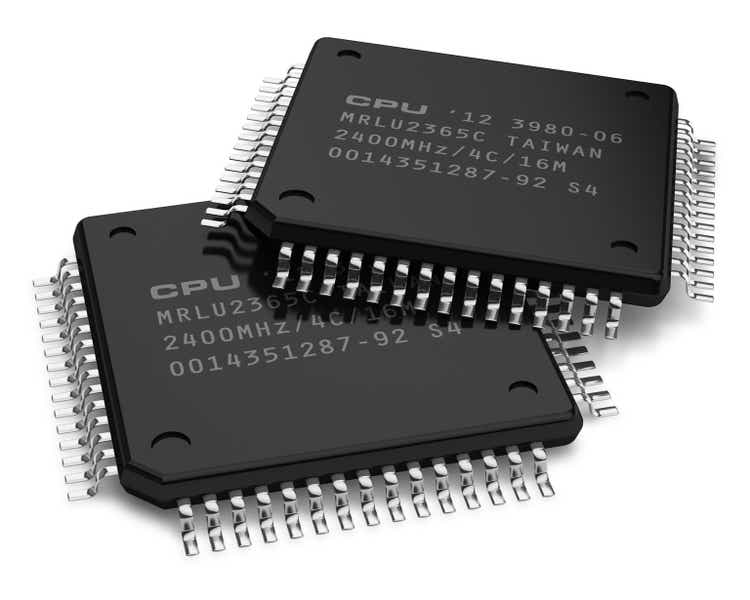 ASE Technology Holding Co., Ltd. (NYSE:NYSE:ASX) has held up relatively well considering the difficult circumstances this year. ASX was able to avoid most of the turmoil that has befallen semiconductor stocks. That is, until June when losses accelerated with ASX stock falling into a steep decline. However, the stock has rebounded and is on the rise again. ASX has outperformed at a difficult time, having done better than most semis. Why will be covered next.

ASX is on the way up

The chart below shows how ASX managed to hold its own in the first five months of 2022. As recently as the early part of June, the stock was only down 7%, which is an achievement considering the major losses other semis suffered during the same timeframe. However, losses accelerated as June went by. The stock lost about 36% of its value by the end of the month. Keep in mind that June was a difficult month for semis and stocks as a whole.

The stock has spent the last couple of months recouping some of those losses, but the stock is still down 26% YTD. In comparison, the iShares Semiconductor ETF (SOXX) has done worse, having lost 31% YTD. The year 2022 has been a difficult year, especially for semis, but ASX has nevertheless managed to outperform under difficult circumstances.

This outperformance could continue. While the overall trend is still pointing down, additional gains are likely in the short term. The stock has, for instance, moved past the 50-day moving average on Friday, a bullish signal that may encourage additional buying. Note that the recent turnaround happened once the stock reached $5 or so, which is an area where resistance used to be. Resistance tends to turn into support once the stock breaches it, which could explain the stock’s reversal in the $5 region.

It also suggests the rally has a foundation with support in place. In addition, the stock has ways to go before it encounters resistance. The next resistance level looks to be in the $6.25 region. Combine all this with the underlying strength ASX has shown all year and buyers may have seen enough to decide to step in.

A big reason why semis have struggled so much recently is because a growing number of companies are reporting weakening demand. The list of companies issuing weak forecasts include Samsung (OTCPK:SSNLF, OTCPK:SSNNF), Nvidia (NVDA) and other high-profile names. These reports have weighed on the entire sector by giving credence to the perception that the cyclical semiconductor industry is past the peak in the current cycle and heading for a downturn.

Bulls should, therefore, be pleased to hear that ASX has yet to be meaningfully impacted by the slowdown other companies are seeing. In fact, ASX managed to beat estimates for the top and the bottom line in its most recent quarterly report. Q2 revenue increased by 26% YoY to NTD160,439M, which is equal to $5.48B using an exchange rate of 1:29.26 for the U.S. dollar. Advanced packaging continues to be a bright spot, up 48% YoY. Earnings per share increased by 57% YoY to NTD3.61, which translates to $0.247 per ADS. EBITDA was NTD35,211M in Q2 FY2022, up from NTD27,350M in Q2 FY2021. Margins continued to improve.

Note that the Q2 FY2021 numbers include contributions from facilities in China that have since been disposed. On a pro forma basis, which excludes these contributions, revenue increased by 33% YoY and EPS increased by 70% YoY. In other words, the YoY gains were better than reported. Total interest-bearing debt was NTD218.3B or $7.46B, partially offset by NTD79B or $2.7B in cash, cash equivalents and current financial assets. ASX has a fair amount of debt, which may be seen as a weakness, but the current ratio is manageable at 1.18. The table below shows the numbers for Q2 FY2022.

The results were better than expected. Still, ASX is aware of the concerns out there about the industry. In fact, ASX acknowledges some companies are having problems with the market undergoing an inventory correction. However, at this point, it is not expected to have much of a negative impact on ASX, at least for the rest of FY2022. From the Q2 earnings call:

“First of all, our full year outlook is on track. The overall market is undergoing inventory correction, with some sectors more aggressive than the others. However, we are still seeing some sectors remain constrained. With our diversified customer portfolio and manufacture flexibility, we’re seeing a solid second half ‘22 with quarter-over-quarter growth of our HoldCo revenue. 2022 full year ATM revenue year-over-year growth will be 2x of the logic semiconductor industry, with EMS also seeing solid top line growth. We do expect further margin expansion, for both ATM and EMS business comparing to 2021.”

A transcript of the Q2 FY2022 earnings call can be found here.

There is currently a fair amount of trepidation out there as to where the semiconductor industry is heading, especially in light of the pessimistic outlook given by several industry heavyweights, which is why management added some color as to its views on the matter.

“it’s really too early to talk about 2023, but if you really want to ask and I can offer you a most likely scenario, right? I believe next year, is going to be a challenging year with a lot of uncertainty, a headwind. So the overall industry, it won’t perform as well as the previous few years. However, in that scenario, you will have some companies, some sectors doing better than the others. And certainly, I believe the company you have just mentioned, as well as ASE, we’re striving to perform in the upper threshold of the average. In other words, it is possible even though the industry is flattish, slightly up or slightly down. But some company will continue to outperform the others.”

Basically, management believes the semiconductor market is likely to keep decelerating as conditions will not be as favorable next year as in the last few years. With that said, some companies will outperform. ASX could be one of them.

Why ASX is worth considering

ASX is showing strength by outperforming, supported by double-digit growth in the top and the bottom line, but ASX has other attributes to call upon. For instance, ASX recently paid a dividend of $0.48, giving ASX a yield of around 8%, which is much higher than most semis. It’s possible the dividend will be cut if earnings deteriorate to a great extent, but this looks unlikely at the moment. Note that analyst estimates currently expect ASX to earn $0.89 in FY2022 and $0.91 in FY2023, which leaves ASX a lot of wiggle room for a dividend.

In addition, unlike other companies in the sector, ASX is not expensive to acquire. For instance, ASX has an enterprise value of $16B, which is equal to about 3.7 times EBITDA on a forward and trailing basis. In comparison, the 5-year average is 6x, which suggests ASX is basically on sale. ASX is also cheaper than most semis with the sector median at 13x EBITDA. The stock is valued at 1.29 times book value. The table below shows the multiples ASX trades at.

On the other hand, ASX is not without its faults. The balance sheet could be better. As mentioned earlier, ASX carries a significant amount of debt on its books. This is why its enterprise value of $16B is way more than its market cap of $11.4B. Still, the amount of debt is manageable in comparison to earnings. Earnings would have to worsen a lot before it becomes an issue.

ASX is the leading provider of OSAT services worldwide. Reports by some of the top players in the semiconductor industry that semiconductor demand is weakening have therefore affected how the stock is perceived. The belief is that a deceleration or perhaps even contraction in demand will reduce the need for OSAT services, which in turn could negatively affect sales and earnings growth at ASX.

Nothing is set in stone, but the odds favor a downturn in the semiconductor industry, especially after the industry has expanded as much as it has in the last several years. However, a downturn does not necessarily have to a bad thing for ASX, depending on the extent of the downturn. This could happen if, for instance, a downturn entices a shift towards increased adoption of OSAT services, which in turn could happen if there’s a shift in demand towards companies utilizing OSAT services and away from chip makers relying on their own test and assembly services.

It’s also worth noting that while other semis have seen their numbers deteriorate, there’s not much of it to be found at ASX. Growth in the top and bottom line remains strong. There has been some softness in certain market segments, but strong demand elsewhere has more than made up for it. Automotive revenue, for instance, is still going strong. Advanced packaging revenue is still outperforming. If there is a downturn for some companies in the semiconductor space, it isn’t there for ASX.

I am bullish ASX as noted before in a previous article. There are potential problems out there for ASX, but they have yet to really manifest themselves. The balance sheet needs some work, but nothing that cannot be handled. The stock has lost ground this year, but it has also shown underlying strength by doing better than most semis. The top and the bottom line are still growing strong. It won’t take much to get in on ASX with multiples where they are. The dividend means someone can be more flexible with the stock during a potential downturn.

Bottom line, the troubles some semis are seeing should not be ignored, but that by itself is not reason enough to stay away from all semis. Long ASX may not be right if someone is only in it for the short term due to current circumstances. The industry is dealing with headwinds that are likely to persist for a while. The charts are still pointing down.

However, long ASX is worth considering if someone is in it for the long haul, especially if someone thinks highly of advanced packaging and its potential, considering current valuations, still solid growth prospects and generous dividend. The stock is not perfect, but there are more things to like than not to like. Long ASX makes the most sense.