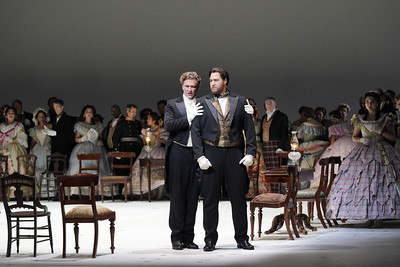 The good news about San Francisco Opera’s premiere of Robert Carsen’s acclaimed production of Tchaikovky’s “Eugene Onegin” is that it marks the return of the Russian repertory to the company after a 14-year hiatus.

To my knowledge, no company leaders have explained the reason for long absence of such an important part of opera’s appeal, but it was surely missed.

Staged in revivial by Peter McClintock, several more recommended performances of “Onegin” — an 1879 work regarded as Russia’s most popular opera and inspired by Pushkin’s verse novel of the same name — continue to Oct. 14 at the War Memorial Opera House.

The even better news is the bright and earnest singing of American tenor Evan Leroy Johnson as Lensky, Onegin’s friend whom he kills in an Act 2 duel brought on by jealousy between the two.

In his aria before the fatal gentlemanly gunfight, Johnson — alone onstage and prompted by the melancholy prelude as he stands on Michael Levine’s minimalist set, which is nothing more than a white, three-sided, 50-foot- high hung plastic drop — sings of his past and carefree youth. His voice, by turns, is full of regret, charming lyricism, and angst for his loss of Olga, his girlfriend, capped by pathos.

He earned and deserved the loudest applause of the afternoon, pausing conductor Vassilis Christopoulos (making his American debut) in his effortless nearly three-hour stand on the podium to make the most of Tchaikovsky’s score that is notable for being psychologically penetrating, emotionally affecting, and naturally conversational. In short, it’s been a crowd-pleaser for some 140 years.

Johnson also aced his Act 1 aria of youthful passion about life and Olga but his developed artistry did not make a distinct imprint until the pre-duel scene.

Alone onstage in Act 1, with faux leaves surrounding her bed on the mammoth stage, her “Letter Scene” aria, in which she writes a long love letter to Onegin but won’t dare re-read it, Muraveva’s voice floats and shimmers as the music turns lyrical and reflective, buoyed by flutes, clarinets, horns and a taste of harp. At one point, totally smitten and dressed in a nightgown, she dances joyously in the moonlight, tossing leaves and imagining a true, long-lasting love with Onegin.

Of course, Canadian bass-baritone Gordon Bintner, whose vocal range is perfectly suited to his character’s cool and aloof bearing, capped by smartly-tailored clothing and sometimes a top hat. Within a few measures of music, he shatters the bookish and immature Tatyana’s dreams, only to live after the duel and be reunited with her some years later during the ball scene in St. Petersburg, where she is married to Prince Gremin, portrayed by Italian bass Ferruccio Furlanetto.

It is his singing in the aria telling Onegin how much beauty and love Tatyana has brought into his life that drew the afternoon’s second-biggest burst of applause. In full uniform and assorted regalia, Furlanetto ably conveyed his love for his wife while striking a noble presence onstage.

Shortly afterward, Bintner’s Onegin declares his love for Tatyana, but, while expressing a still-lingering attraction to Onegin, tells him she will not betray her husband.

And the curtain comes down on a lonely Onegin, distraught for initially spurning her love and deeply regretting it, he pays a heavy price for his actions.

I would be remiss if I didn’t acknowledge the finely-spun but hefty vocals of American mezzo-soprano Ronnita Miller, as Tatyana’s nurse, Filipyevna; and the equally smooth rendering and dramatic thrust evidenced in the singing of Russian mezzo-soprano Aigul Akhmetshina, who portrayed Olga, Tatyana’s sister.