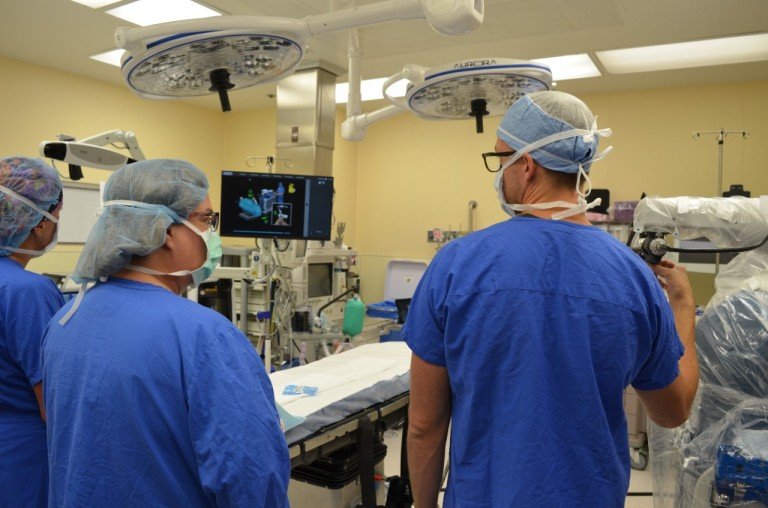 BERLIN, Md. – Atlantic General Hospital became the first hospital on the Eastern Shore to offer Mako SmartRobotics™ to patients undergoing joint replacement, an advancement in joint replacement surgery that is transforming the way total knee and hip replacements are performed.

Robotic-arm assisted surgery is a newer approach to joint replacement that offers the potential for a higher level of patient-specific implant alignment and positioning. The technology allows surgeons to create a patient-specific 3D plan and perform joint replacement using a surgeon-controlled robotic arm that helps execute the procedure with a high degree of accuracy.

Demands for total knee replacements in the United States are expected to increase 189% by 2030, yet studies have shown that approximately 20% of patients are dissatisfied after conventional surgery, according to officials with Atlantic General.

“For post-operative patients, particularly in the knees, we’re seeing faster recovery times,” explained Dr. Sean Hooker, medical director for orthopedics at Atlantic General Hospital. “It has what’s called haptic-technology and the robot system really allows us just another safety tool to kind of keep us within the perimeters of those bone cuts and prevent us from injuring the soft tissues.”

“This system makes this process a lot more uniform, a lot more predictable, and a lot more accurate than what we’re able to do manually,” Dr. Hooker told our Rob Petree. “This really does give us the ability to provide the people of the Eastern Shore state-of-the-art technology and give them a lot of confidence that we’re gonna be able to do it right every time.”

The Mako system better addresses the increasing need for hip replacement in the community’s active aging population as well. During surgery, the surgeon guides the robotic arm to prepare the hip socket and position the implant according to the predetermined surgical plan. In a controlled matched-paired study to measure pelvic bone tissue removal, results suggested greater bone preservation for Mako Total Hip compared to manual surgery.

The surgeons of Atlantic General Orthopedic Surgery and Atlantic Orthopaedic will be performing knee and hip surgeries at Atlantic General Hospital using the Mako SmartRobotics system. More information can be found at www.agh.care/joint.