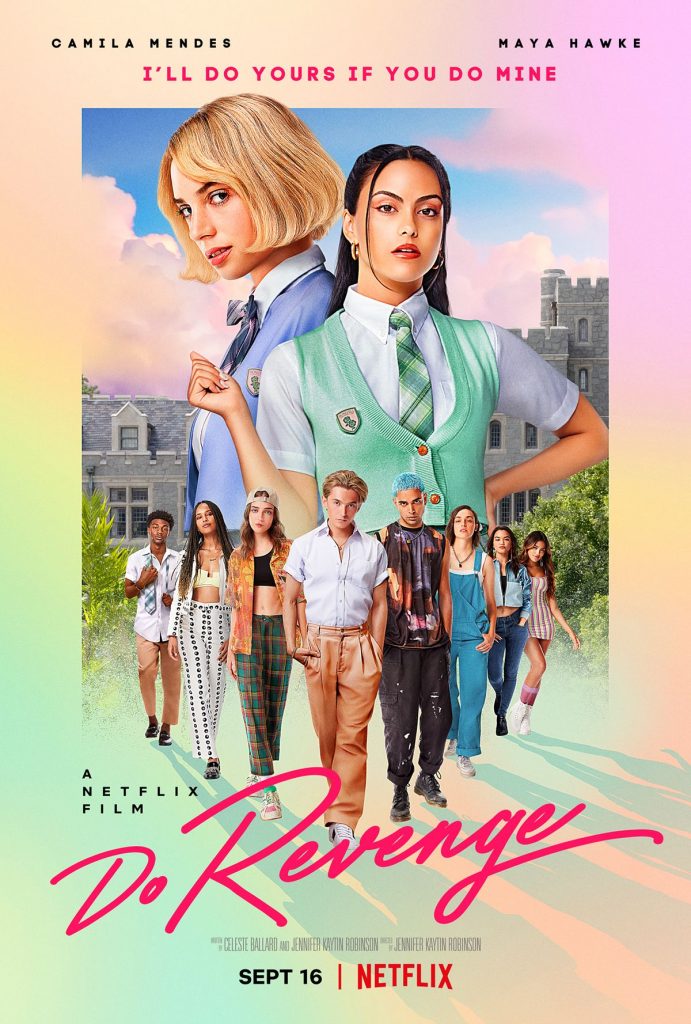 We asked Do Revenge costume designer Alana Morshead what her favorite teen movie was growing up, and the answer was no surprise: Clueless, followed closely by Romy and Michele’s High School Reunion. These visually iconic ’90s films (notably styled by costume designer Mona May) not only established the tone for teen movies of the era but also marked a new age in fashion on-screen with vibrant wardrobes, archetypal accessories, and an inherent DIY-ness just as critical to the story as the plot.

Streaming now on Netflix, Do Revenge is an homage to classic ’90s and ’00s teen movies as well as an astute social commentary on the youth culture of today. While it combines elements of Mean Girls, Jawbreaker, and even a dash of Alfred Hitchcock’s Strangers on a Train, Do Revenge is referential but intentionally modern. “I had a very clear aesthetic and vision for Do Revenge,” shares director and co-writer Jennifer Kaytin Robinson. “I knew I wanted to pull from ’90s runways for Drea and ’70s mod for Eleanor. I wanted to pay homage to the worlds that we were inspired by, but it was also very important to me and the entire team that we were never being derivative.” Morshead concurs, noting a shared love for ’90s movies and the need to avoid entering spoof territory: “There are slight nods, but it is updated to look like the present day.”

Given the abundance of references throughout, the overall look and feel of the film create a world that stands out as distinctly unique. Morshead collaborated closely with Robinson to create vintage- and retro-inspired ’fits that reflect iconic characters’ wardrobes. “Alana is an encyclopedia of both fashion at large and the fashion in the films that were our touchstones in creating the look of Do Revenge,” Robinson shares. “In our first conversation, I knew she was the person. She revered the teen movie as much as I did, and it was clear we both wanted to make the same film.” Heightened but never costumey enough to become distracting, the aesthetic of Do Revenge is, as they say, a whole vibe.

The movie stars Camila Mendes, Maya Hawke, and Austin Abrams as students at Rosehill Country Day, an elite private school in Miami, Florida. While the intent of any school uniform is to create sameness, the mix-and-match nature of the pastel purple-and-green wardrobe at Rosehill lends itself not only to gender-fluid styling but also, as any dress code–abiding teen will attest, demands that an emphasis be placed on accessories. This attention to detail is where Morshead truly shines. “Because there were so many scenes at school, I didn’t want to have these amazing looks outside of class and then go to school and be completely uniform,” she explains. “We had to find a way that was appropriate to be at school but also keep the fun of the movie going, so the number of socks and earrings and accessories we had was kind of unreal.”

Sourcing everywhere from eBay to Instagram to small-town flea markets to vintage stores, Morshead and her team approached each look with the DIY tactics taken by Drea, the main character played by Mendes. In addition to being a Teen Vogue honoree, a tennis instructor, and an aspiring Ivy League student, Drea is a talented seamstress and makes most of the outfits she wears when not at school. For instance, the blue dress she wears at the party in the opening scene looks polished but also like something Drea could have made herself. “Maybe she took the sleeves off, or it was a halter top, or it was knee length, and she shortened it,” Morshead muses. “We didn’t have the budget to just get everybody designer pieces, and it felt true to Drea’s character to lean into the ’90s-supermodel references.” The translucent wrap Drea wears was purchased at an inexpensive shop in Atlanta for $15. Morshead loved the color and how it reflected light, but she had to rework the tissue paper–thin design to fit Mendes’s body, eliminating the original voluminous sleeves for a more tailored fit. “It was so delicate that any time we carried it anywhere it would get damaged. By the end, if you got too close to it, you could see all of the rips and holes in it.” But imagining the audience’s first look at Drea without it? As if!

Originally scheduled to film on the West Coast, Do Revenge moved production to Atlanta in order to accommodate Hawke (who plays Eleanor), as she was working simultaneously on the fourth season of Stranger Things. “The film was originally set in Santa Barbara, but when we moved production, we changed the setting to Miami, as it was a better visual match,” explains Robinson, who is a Miami prep-school graduate. “It was a happy accident, but I think setting the film in Miami allowed us to create a look that doesn’t exist in the teen canon yet, which was extremely exciting.”

In addition to the truly delightful pastel school uniforms, this location switch prompted Morshead and her team to explore Atlanta’s many beauty-supply stores, where they found tons of socks, jewelry, headbands, and belts. This proved essential to both Drea and Eleanor. After the requisite makeover scene, Eleanor sports a distinctly retro, ’70s-inspired style that includes bucket hats and dangly earrings.

True to form (and teen-movie canon), the final outfits worn by both characters were one-of-a-kind pieces created precisely for each character’s peak moment. At the Admissions Party, a night of social media–free debauchery for college-bound seniors, Eleanor wears an electric-orange top that is made entirely out of zippers, and Drea wears another self-styled ’90s dress with chunky, lightweight chains—originally two belts purchased for $2 each—as straps. “I wanted something a bit tougher for them since it was the climax of the film, so the looks have the same industrial flavor,” recalls Morshead.

Whether exploring fashion or farce, the details are of utmost importance, and the world building in Do Revenge is truly remarkable when you consider the incredible costumes, perfectly placed needle drops, clever casting, and terrific twists. “I wanted the film to stand on its own and find its unique place in the canon,” Robinson shares. “And I do think we achieved that.”

Of course, there are also easter eggs abound—we see you, pink, fluffy Cher pen—but you’ll have to watch it yourself to see how sweet Revenge can truly be.

Do Revenge is now streaming on Netflix.

Up Next: We Pull Back the Curtain on Don’t Worry Darling’s Exceptional Costume Design