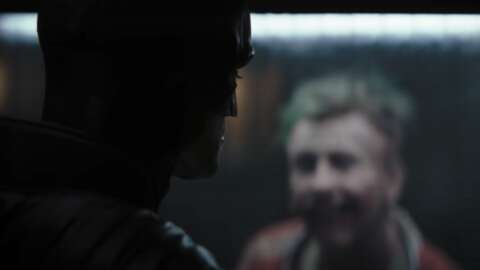 Barry Keoghan’s appearance as the Joker at the very end of The Batman was one of the big surprises in the film, leading fans to question whether the character is planned to take a larger role in a future film. In a recent interview, Keoghan has explained more about the role, saying he hasn’t heard anything about The Batman 2, but still hopes to play the Joker again.

In the GQ interview, Keoghan explains that he actually wanted to play The Riddler, which is what he was aiming for when he sent his unsolicited audition tape. The tape has now been shared by GQ, showing Keoghan in a Riddler outfit involving a bowler hat and green suspenders over dark clothes. The tape is mostly about the actor’s physicality, showing Keoghan wandering through a hallway before committing an unspecified act of violence off screen.

While Jonah Hill had already been cast in the role, later to be replaced by Paul Dano, Keoghan still asked producer Dylan Clark to watch his tape. Four months later, he got a call asking him to play the Joker–and to keep it secret.

Keoghan only ended up in one brief scene at the very end of The Batman, though a longer deleted scene with his Joker has been uploaded to YouTube. Like other takes on the Joker, Keoghan’s version of the character is adorned with heavy prosthetic scarring, though the actor insisted on keeping his eyes the same. “I wanted some sort of human in there behind the makeup,” he explained. “I want people to relate to him.”

At present, Keoghan hasn’t heard anything about a sequel, though Robert Pattinson, writer Mattson Tomlin, and director Matt Reeves are so far all confirmed to be returning for another film. He’s still hoping to return to the role, however, with The Batman’s ending feeling like a promise of something larger. “As soon as that call comes, I’m there man, I’m there,” Keoghan promises.