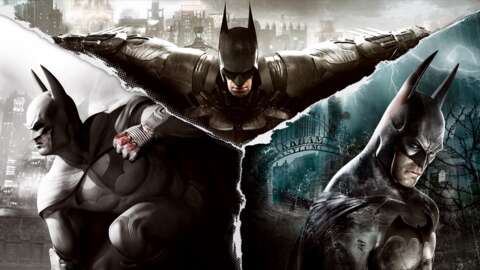 If you’re looking to score a trip to Gotham City that doesn’t cost $60 (plus disappointment tax), you can grab a great deal on digital tourism right now with this discount on Batman: Arkham Collection at Fanatical. bundle only costs $7.79 and gathers Rocksteady’s Arkham trilogy, including all of the DLC, into one collection of bat-themed vigilante justice.

For Batman: Arkham Asylum, you get its Game of the Year Edition which throws in four extra challenge maps. It’s not much, but the original game still holds up well in case you feel like revisiting this classic. The beefy GOTY version of Batman: Arkham City includes more content, and you’ll be able to crack a few skulls in more challenge maps and a Robin-centric DLC. A more fine-tuned experience when compared to Arkham Asylum, Arkham City is a bigger game that dials up the action and has a shocking ending.

Batman: Arkham Knight is where the real value for money lies, as Fanatical is offering the Premium Edition in this bundle. That includes the base game, all of the extra DLC story missions featuring the Bat-Family in action, extra costumes, dozens of bonus challenge missions, and the chunky Season of Infamy expansion.

That’s a lot of extra content for an excellent game that is still as much fun to play in 2022 as it was back in 2015. With modern advances in PC hardware, it also looks like a next-gen title in action.

It’s worth noting that for Steam Deck users, Valve currently lists these games as unsupported for its handheld gaming PC system. However, there are workarounds for this if you feel brave enough to tinker with your Steam Deck and run it in desktop mode.