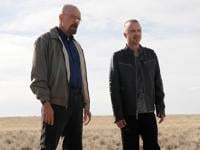 Editor’s note: The following column contains “Better Call Saul spoilers up to but not including the series finale, airing Monday night (Aug. 15) on AMC:

In 2013, fans didn’t just crowd around their brand-new 48-inch, 200-pound Panasonic Plasma TV screens to watch the final few episodes of “Breaking Bad.” They gathered at cinemas to watch their antihero go down in an unapologetic symphony of gunfire and Badfinger’s “Baby Blue” on a (real) big screen alongside dozens of other newly converted meth sympathizers.

The “Breaking Bad” capper was the third most-watched series finale in cable history, behind only “The Sopranos” and “Sex & The City.” A one-hour “Talking Bad” special even drew 4.4 million viewers.

Nine years later, Monday’s pandemic-delayed finale of its prequel series, “Better Call Saul,” might feel comparatively anticlimactic coming, as it does, on a Monday night in a new TV world now flush with streaming competition and content overload.

After 7 million watched the highly anticipated pilot in 2015, “Better Call Saul” settled into a weekly average of about 2.2 million viewers. Healthy by 2022 measures, but still: If you were to just go by the numbers, you might assume “Breaking Bad” was surely the better series.

And, by most every objective critical standard, you would be wrong.

“Breaking Bad” didn’t become a cultural phenomenon overnight, and it’s just as likely the pop status of “Better Call Saul” will only grow over the coming years.

At first, “Better Call Saul” might have understandably been seen as nothing more than a cynical, opportunistic cash-grab to milk the “Breaking Bad” franchise for a few more years. The premise: Go back in time through the eyes of the comic sidekick Jimmy McGill and tell us everything that happened before we first dropped in on Walter White’s high-school chemistry class in 2008.

But it ultimately delivered far more on that premise than anyone could have imagined.

“Breaking Bad” was historic television for showing us the shockingly believable moral decline of a sympathetic, cancer-stricken father who takes up cooking meth as a desperate attempt to set up his pregnant wife and teenage son (with cerebral palsy!). Fast forward to Walter standing idly by as Jesse’s girlfriend chokes on her own vomit. (And that was only season 2.) By the finale, the spectacular full descent of Walter White, played to ingenious effect by Bryan Cranston, was on par with the Greeks.

And yet “Better Call Saul” gave us everything “Breaking Bad” did — and more. The hubris, the decadence, the vengeance, the rises, the crashing falls — but with far more complexity and nuance along the way.

We were promised that “Better Call Saul” was going to be a prequel. But creator Vince Gilligan delivered both prequel and sequel. Just as “Saul” took us six years back in time, the past few episodes have taken us six years beyond the end of “Breaking Bad,” making for a 15-year, 125-episode banquet of satisfying storytelling. (Notice I’m not saying a word about the “El Dorado” spinoff.)

In the end, the arc that Gilligan has given Bob Odenkirk to play out as Jimmy/Saul/Gene has been just as pronounced as Walter White’s, while being far more grounded, much less predictable — and far more jagged in its course.

The unscrupulous, fast-talking Saul Goodman we first met in the second season of “Breaking Bad” was clearly the writers’ infusion of badly needed comic relief. It was problem-solving. This Jimmy is already morally bankrupt, and he’s quickly caught in the cartel’s clutches. Compare that to the comparatively adorable Jimmy McGill we meet at the start of “Better Call Saul,” so harmlessly inept as an attorney, he’s based in the back of a nail salon.

But in this astonishingly vast final season, we’ve met the Saul Goodman who cruelly sets out to destroy his relatively decent former boss for simple sport, possessed with the primal need to destroy — and he is incapable of pulling himself out. We’ve been assured through various clips that a few years of obscene and decadent wealth are in Jimmy’s post-”Breaking Bad” future, followed by a tax bust and a run from the law. Now fast forward past the docile, Nebraska Cinnabon years to last week’s shocking episode, which fully re-released the character’s still-beating con-artist heart. That “Gene” showed us a wicked streak that evokes every shade of Walter White.

Fans of the character were naturally made uncomfortable by “Gene’s” inability to pull back from fleecing the lonely, single rich guy with cancer. But if viewers did not connect the pronounced dots that Gilligan was drawing, get out your Magic Marker.

His victim, like Walter White, is dying of cancer. “Gene” is unmoved. And did you notice that when he rifles through the man’s financial papers, the camera reveals a portfolio value of $737,632 and change? “Breaking Bad” fans might remember the episode when Walter crunched the numbers and calculated exactly how much money he would want to leave his family from making meth: $737,000.

These men, Gilligan is telling us, are essentially the same.

Another of a dozen reasons one could argue for “Better Call Saul’s” place above “Breaking Bad” is the storylines afforded to the shows’ primary female characters. Walter’s wife, Skylar, is played by Anna Gunn, while Jimmy’s is portrayed by Rhea Seehorn — clearly two of the great actors of their generation.

But while Skylar’s story is trapped — first in the box of inevitable discovery and then in the box of forced complicity — Kim Wexler emerges as one of the most revolutionary, unpredictable characters of our time. Kim transitions in wild extremes from a masterful if unfeeling corporate hatchet to a compassionate public defender in a desperate search to know who she is. But, like Jimmy, she can’t deny her true nature forever. Kim’s full, Lady Macbeth embrace of the Howard con, followed by six years of self-imposed regret and isolated penance, are bone-cuttingly human.

These three, Gilligan is telling us, are essentially the same. With one important difference: Kim takes accountability for her crimes, and seeks absolution.

A few weeks ago, online “Saul” fans were virtually self-immolating because Gilligan was using so much of the show’s precious remaining minutes spinning into the future. But, even without having yet seen the finale, it’s clear the (presumed) end of the franchise has been in very loving hands all along. These episodes have given us priceless Easter eggs (including moments with Carol Burnett, Bryan Cranston and Aaron Paul.)

At the beginning of “Better Call Saul,” no one was even wondering what might happen after “Breaking Bad” — but in this final season, Gilligan has told us anyway. It’s rare for a creative team to resolve questions most other shows would never have even addressed.

And thanks to that care, we have answers to the only two questions that really matter: We know that Saul can’t change. And we know that Kim has.