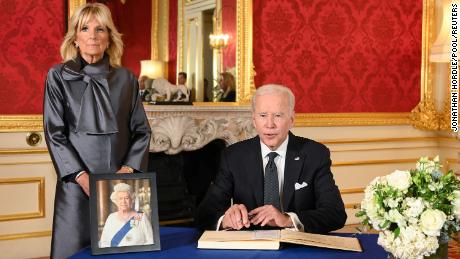 The President on Sunday said the Queen was “the same in person as her image — decent, honorable and all about service.”

“We’ve had an opportunity to meet with an awful lot of consequential people. But I can say that the ones who stand out in your mind are those whose relationship and interaction with you are consistent with their reputation,” Biden said after signing a condolence book Sunday evening.

Biden, who has often spoken out his own losses, also expressed condolences to the Royal Family and the entire United Kingdom, saying, “It’s a loss that leaves a giant hole, and sometimes you’ll think you’ll never overcome it. But as I’ve told the King, she’s going to be with him every step of the way.”

Biden said the Queen reminded him of his late mother because of her mannerisms, saying, “She had that look, like, ‘Are you okay? Is there anything I can do for you? What do you need?’ Also, ‘Make sure you’re doing what you’re supposed to do.'”

Biden took his time signing a lengthy message in the condolence book, writing in part, “She treated everyone with dignity and respect. Jill and I were honored to have met with her and feel her warmth. Our hearts go out to the Royal Family and the people of the United Kingdom.”

Jill Biden, who told CNN on Sunday she is overwhelmed by the outpouring of love and respect she is witnessing for the Queen in London, signed a separate condolence book for leader spouses at Lancaster House. She wrote, in part, “Queen Elizabeth II lived her life for the people she served with wisdom and grace. We will never forget her warmth, kindness, and the conversations we shared.”

The Bidens were joined earlier during their visit to Westminster Hall by Jane Hartley, the US ambassador to the UK. The President was seen making the sign of the cross.

Jill Biden told CNN that her conversations with Charles and the royal family at the reception were strictly about the Queen.

“We really talked about the woman, and who she was, and what she meant really to the whole world,” Biden said, adding that she noted to Charles the human toll of grief.

The President arrived in London late Saturday for a two-day visit honoring the long-reigning monarch, whom he says “defined an era.”

Biden is joining leaders from dozens of other nations to pay their respects to the late sovereign, whom he met last year and declared afterward reminded him of his own mother.

For Biden, it is a moment to reflect on a monarch who embodied a commitment to public service and whose life charted the major historical events of the last 100 years.

Biden and the Queen first met in 1982, when as a young senator, Biden’s own Irish American mother instructed him: “Don’t you bow down to her.”

He didn’t bow down then, or when he met the Queen as president last year while attending a Group of 7 summit in England. But his respect for a woman whose constancy on the world stage over the last century was unparalleled has been plain.

“She was a great lady. We’re so delighted we got to meet her,” Biden said on the day that she died.

The Queen’s surprise decision last year to travel to the Cornish coast to meet world leaders at the G7 summit was a signal of her desire to remain engaged in global affairs.

Later that week, when she hosted Biden and the first lady for tea at Windsor Castle, she inquired about two authoritarian leaders, Presidents Xi Jinping of China and Vladimir Putin of Russia, the President told reporters afterward.

“I loved her sense of curiosity,” Jill Biden told CNN on Sunday of the time they spent alone with the Queen. “She wanted to know all about American politics, so she asked Joe question after question.”

At Sunday evening’s reception, the President saw Charles for the first time since he became King. The two men have met previously and spoke last week by phone.

As Prince of Wales, Charles was a passionate campaigner for certain issues Biden has also championed, including combating climate change. It remains to be seen how involved the new King will be on those issues going forward.

Relatively close in age — Charles is 73, Biden is 79 — the two men have a shared experience of being in the public eye for decades before assuming their current roles as heads of state.

On his call with the King, Biden “conveyed the great admiration of the American people for the Queen, whose dignity and constancy deepened the enduring friendship and special relationship between the United States and the United Kingdom,” the White House said. “President Biden conveyed his wish to continue a close relationship with the King.”

Security in the British capital is at its highest level in memory as Biden and dozens of other world leaders convene to remember the late Queen, who met 13 sitting US presidents during her reign.

White House aides have declined to provide specific security details for the President’s visit but say they are working well with their British counterparts to ensure the demands of presidential security are met.

Plans for the Queen’s funeral have been in place for years, allowing US advisers greater insight into precisely what will happen over the coming days as they make security arrangements. The White House said it received an invitation only for the President and first lady, making for a slimmed-down American footprint.

Biden traveled with his national security adviser, communications director and other personal aides aboard Air Force One to London.

When reports emerged last week that world leaders would be required to ride on a bus to the funeral, US officials were skeptical and shot down the suggestion Biden that would travel to Westminster Abbey in a coach.

In 2018, when other world leaders traveled together in a bus to a World War I memorial in Paris, then-US President Donald Trump traveled separately in his own vehicle. The White House explained at the time that the separate trip was “due to security protocols.”

The Queen’s death came at a moment of economic and political turmoil for the United Kingdom. A new prime minister, Liz Truss, entered office after months of uncertainty following the decision of her predecessor, Boris Johnson, to step down.

Truss invited several visiting world leaders to meet individually at 10 Downing Street this weekend. In the role for only a little more than a week, it will be Truss’ first time meeting face to face with many of her foreign counterparts.

While her office initially said Biden would be among the leaders visiting Downing Street, it was later announced that Truss and the President would meet for formal bilateral talks on Wednesday on the sidelines of the United Nations General Assembly in New York.

A host of issues are currently testing the US-UK “special relationship,” which has been heralded repeatedly in the days since the Queen’s death.

It was only two days after Truss traveled to Balmoral Castle in Scotland to formally accept the Queen’s appointment as prime minister that the long-reigning monarch passed away. Since then, the country has been in a formal period of mourning.

Truss inherited a deep economic crisis, fueled by high inflation and soaring energy costs, that has led to fears the UK could soon enter a prolonged recession. The challenges have been aggravated by Russia’s invasion of Ukraine, which has caused volatility in oil and gas markets.

While few in the Biden administration shed tears at Johnson’s resignation– Biden once described him as the “physical and emotional clone” of Trump — the US and the UK were deeply aligned in their approach to Russia under his leadership.

White House officials expect that cooperation will continue under Truss, even as she comes under pressure to ease economic pressures at home.

Less certain, however, is whether Truss’s hard-line approach to Brexit will sour relations with Biden. The President has taken a personal interest in the particular issue of the Northern Ireland Protocol, a post-Brexit arrangement that requires extra checks on goods moving between Northern Ireland and the rest of the UK.

The rules were designed to keep the border between Northern Ireland and the Republic of Ireland open and avoid a return to sectarian violence. But Truss has moved to rewrite those rules, causing deep anxiety in both Brussels and Washington.

Biden, who makes frequent references to his Irish ancestry, has made his views clear on the issue, even though it does not directly involve the United States. Congressional Democrats have similarly expressed concern over any steps that could reignite the Northern Ireland conflict.

In their first phone call as counterparts earlier this month, Biden raised the matter with Truss, according to the White House. A US readout of their conversation said they discussed a “shared commitment to protecting the gains of the Belfast/Good Friday Agreement and the importance of reaching a negotiated agreement with the European Union on the Northern Ireland Protocol.”

This story and headline have been updated.

Kate Bennett contributed to this story.