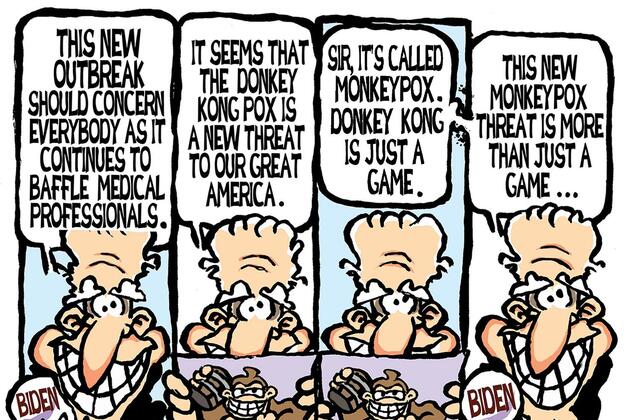 President Joe Biden has a lot of problems, and he’s spent the week trying to convince Americans he’s doing something about them. From baby formula shortages to the war in Ukraine to high inflation, the president wants voters to know he has a plan to ease their pain.

But those plans, experts say, may be just that – plans and proposals, many of which need unlikely approval by an uncooperative Congress or are subject to the whims of hostile foreign leaders, unpredictable markets or other forces beyond any president’s control.

And Biden, facing an unhappy public that emerged from a pandemic only to be hit with big grocery and gas bills, a war and two traumatizing mass shootings, is having a hard time making his case that he is taking whatever action the Constitution allows him to do.

“We think of presidents as being so powerful,” but they are limited, says Barbara Perry, a presidential scholar at the University of Virginia’s Miller Center. And Biden – unlike President John F. Kennedy and Ronald Reagan – “is not a great communicator, nor does he seem to have the skills to get the word out the way they want to get it out,” adding to the White House’s frustrations.

Biden started the week with an op-ed in The Wall Street Journal, detailing his plan to fight high inflation that has overshadowed historically high job growth, low unemployment and a fast-falling national deficit. He met later in the day with Jerome Powell, chairman of the Federal Reserve, to talk about inflation and sent his head of the National Economic Council, Brian Deese, out to talk to reporters.

He followed with an opinion column in The New York Times, announcing he will provide new, advanced rocket systems to Ukraine to fend off the Russian assault.

Wednesday afternoon, the president held a virtual roundtable with producers of infant formula, reiterating his invocation of the Defense Production Act to ramp up production of baby formula and announcing a third overseas shipment of formula (this one from Europe and Australia) that will put 4.6 million bottles on Pennsylvania and California shelves within the next 10 days.

“We are working 24/7 to get infant formula into the hands of parents across the country,” Health and Human Services Secretary Xavier Becerra said during the session.

From the White House press room podium, press secretary Karine Jean-Pierre has detailed the actions the president has taken to advance gun safety – such as regulating untraceable “ghost guns” – only to be quizzed about how Biden could convince Congress to approve gun control measures the legislative branch has rejected before.

During the baby formula roundtable, Biden served as his administration’s own media rep, asking the infant formula manufacturers how they responded to the shortage created when one company had to recall its product from the shelves.

“Did you anticipate that the closure of the Abbott facility, because it was not producing the quality that was necessary, that it would have this profound effect immediately, or did it take a little time?” Biden asked. The question appeared directed at criticisms that the administration did not work better, earlier, to head off shortages when Abbott was forced to recall contaminated formula.

The public relations effort, however, may not be enough to boost Biden’s low approval ratings in time to help Democrats in a challenging midterm election season this fall. And in many cases, Biden’s ability to fix the problems bedeviling the administration is limited.

On inflation, Biden has proposed a series of actions, such as reducing the price of insulin for diabetes patients, changing the tax code, and passing a Bipartisan Innovation Act to increase the domestic production of computer chips. Slowdowns in the delivery of the devices have increased the cost of a wide array of items, including cars.

But Congress has not moved on those items, and Republicans have blamed Biden for spending too much federal cash, increasing inflation.

“Some of the things he said (he could do) would have a small impact, but many of the things he wrote about in the (Wall Street Journal) op-ed were things that have longer-term impact,” says Hamilton College economics professor Ann Owen, formerly an economist with the Federal Reserve board.

“If people are looking for Biden to do something to bring inflation down right away, he does not really have the tools to do that,” Owen adds.

On COVID-19, Biden has indeed ramped up testing and vaccinations during his term, Perry says. But he can’t fight Mother Nature and human nature, she adds, noting that public impatience with masking and the virus’s mutations aren’t things he can control.

On Ukraine, Biden has repeatedly noted his success in strengthening the NATO alliance. But “has he ended the war? No. That’s something a president can’t do,” Perry adds. Aside from the threat of the war itself, the ongoing Russian invasion means higher gas prices as well, since the U.S. and its allies have imposed embargoes on Russian energy.

Biden’s meeting with Powell was useful, Owen says, since the president made it clear that he would not interfere with the independence of the monetary policy board, which has the power to raise interest rates, a tactic that reduces inflation.

“Congress can help, passing laws to reduce drug prices,” Furman, now an economics professor at Harvard’s Kennedy School of Government, told MSNBC on Wednesday. And Biden should make it clear he understands Americans’ struggles to pay the bills. But “the best thing to communicate is an actually lower inflation rate,” he said.