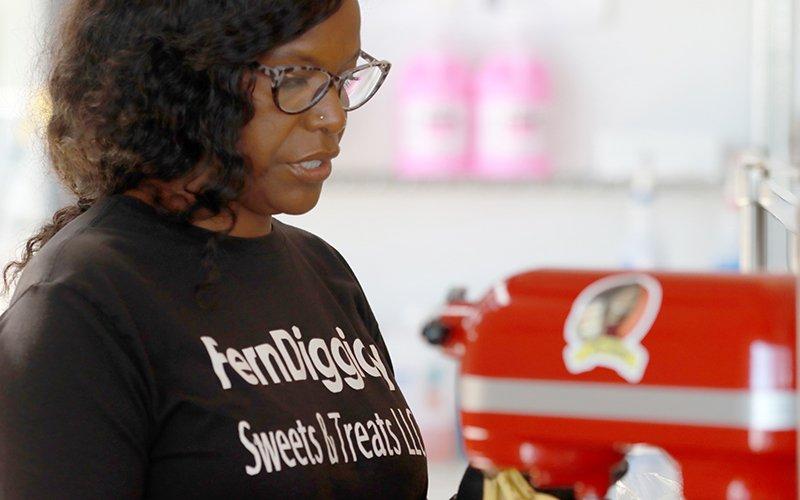 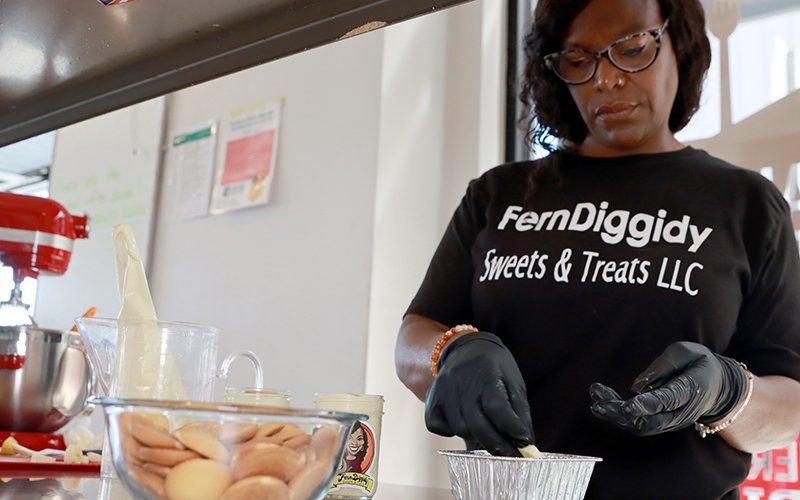 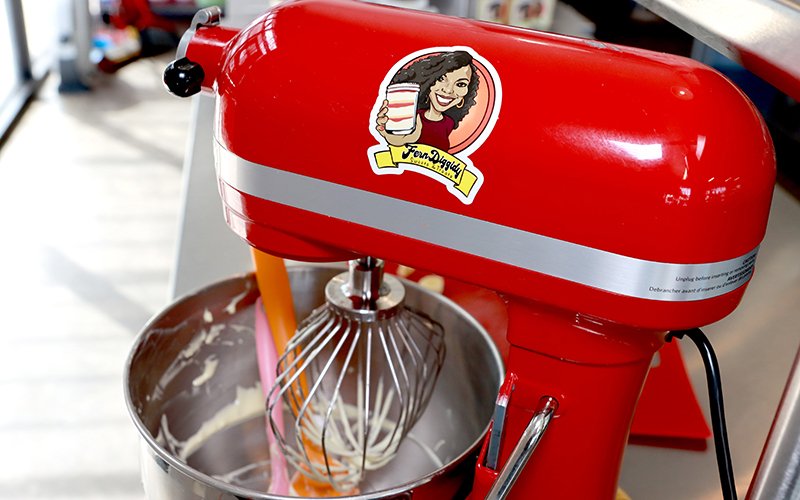 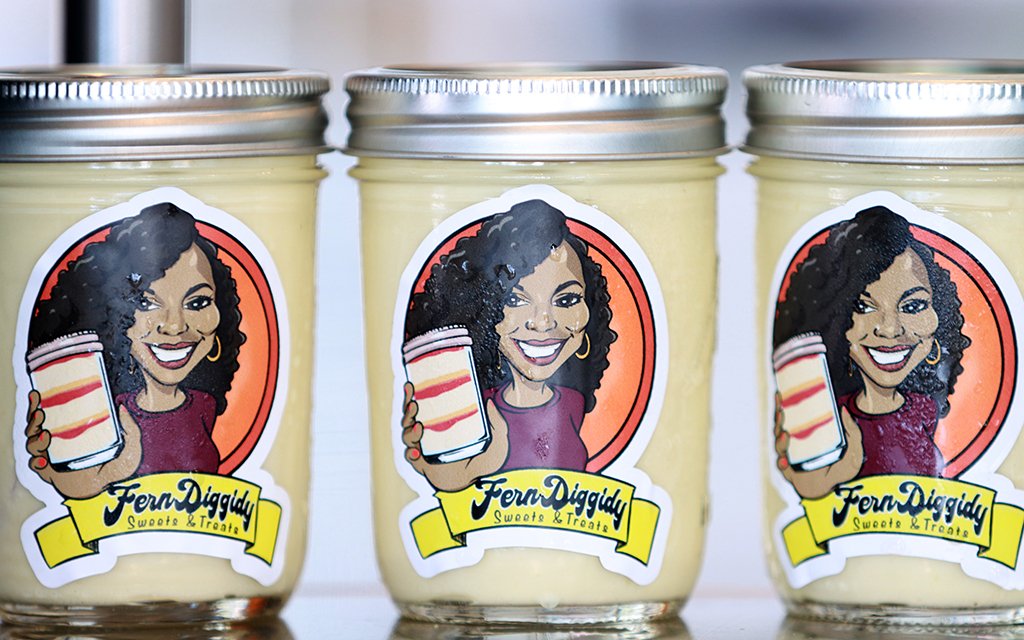 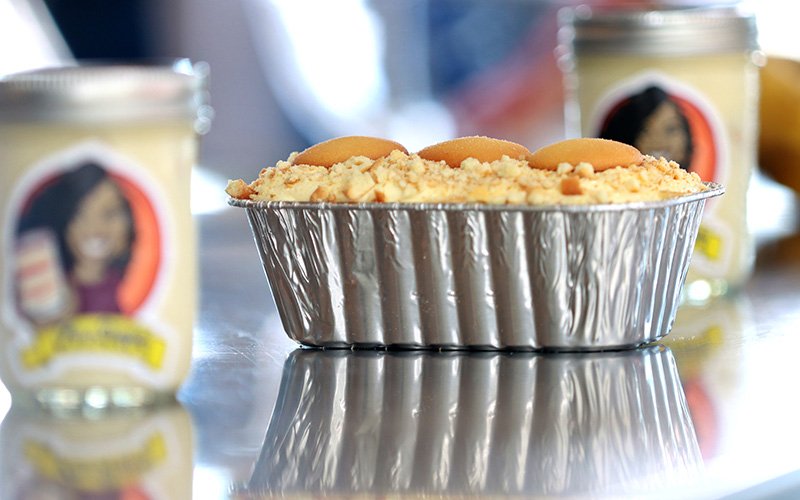 The banana pudding tray is FernDiggidy Sweets & Treat’s highest-selling item, according to CEO and founder Fernanda Sayles. She quickly puts together jars and tins of pudding, eventually leading to a full refrigerator. (Photo by Justin Spangenthal/Cronkite News) 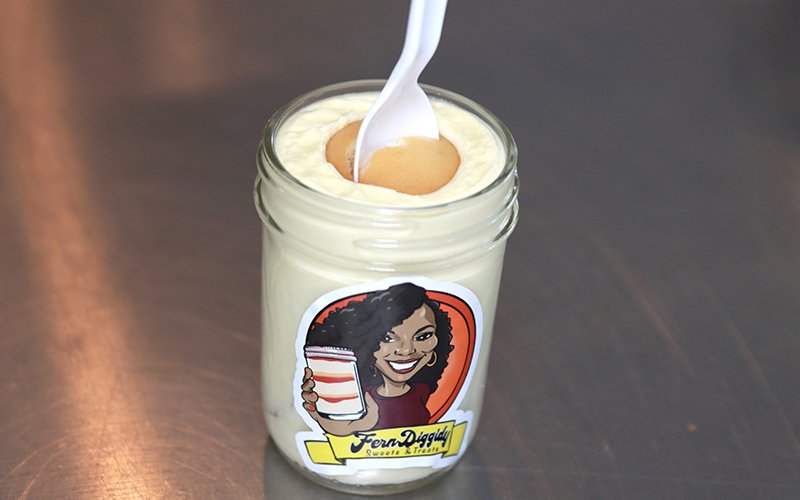 Every jar of banana pudding comes with fresh bananas mixed in and topped with a wafer cookie. FernDiggidy Sweets & Treats makes other sweet treats, each made with fresh and local ingredients. Photo taken Sept. 13, 2022. (Photo by Justin Spangenthal/Cronkite News)

PHOENIX – Fernanda Sayles found her love for baking at age 10, when she started making banana pudding for her family in south Phoenix.

At the time, Sayles never would have imagined she’d someday own a successful business selling desserts in Mason jars.

Her success didn’t come easy though, as she began FernDiggidy Sweets & Treats in 2015 with only the resources she had in her kitchen.

“I didn’t have a lot of money at all to start my business,” she said. “I’ve left a couple of jobs to work my business full time, but of course the bills kept coming, so I had to go back to work” at a doctor’s office.

Sayles’ experience is common among Black business owners, who as of 2021 have the lowest entrepreneurship rates of any single race and ethnicity in the U.S., averaging 0.28% since 1996, according to a national report in March by Kauffman Indicators of Entrepreneurship. However, that average rose to a high of 0.38% in 2020.

The 2022 State of Black Business report, released in August by data nonprofit The State of Black Arizona, indicates more than 50% of Black business owners struggle with a lack of access to capital, driven by low levels of personal wealth, disparities in creditworthiness and low loan request rates.

The report also indicated that Black entrepreneurs have the lowest opportunity share – meaning they are more likely to start a business out of necessity rather than opportunity – of any race or ethnicity.

If Black-owned businesses reached parity with the population, the study said, there would be 4,945 such businesses in metro Phoenix. According to Brookings Metro data quoted in the report, there are 1,019 today.

More than 132,000 jobs would be created in metro Phoenix if that parity existed, the study said.

Teniqua Broughton, executive director of The State of Black Arizona, said African Americans have had lower entrepreneurship rates than people of other races for decades, and the trend has persisted in Arizona for generations.

She attributed this to “disparities in personal wealth, and building proper, equitable generational wealth, which have been historically taken away.”

Sayles said she didn’t have savings or other funds to launch her business. She didn’t qualify for loans and was denied even after obtaining permits and tax information.

Sayles said she started small and built her business through her personal network.

“I would go to local barbershops all over the Valley to get the word out, and they welcomed me in, supported me and told everyone they could about my business,” she recalled. “The community was my backbone, from the barbershops to friends and even complete strangers.”

Sayles said her business is rooted in her family’s cookouts. Her family enjoyed her banana pudding, strawberry cheesecake, peach cobbler and seasonal items so much, they’d often argue over who got the last bite – especially the crispy corners of cobbler.

To resolve the spat, she started making desserts in Mason jars, which restored harmony. Soon after, Sayles decided to spread this joy and “goodness” and founded FernDiggidy.

Sayles now bakes at the Local First Arizona Community Kitchen in Mesa and sells her sweets and treats at the Uptown Farmers Market in Phoenix, Retail Therapy AZ in Glendale and Main Street Harvest community grocer in Mesa. She also whips up gluten-free, sugar-free and vegan options.

Before her business could take off, Sayles struggled to keep it afloat during the pandemic. She applied for a Phoenix small business microgrant and received $3,000 to cover rent, utilities, employee salaries and other expenses. The Phoenix City Council allocated $8 million from the American Rescue Plan Act for the grant program.

But many businesses suffered during the COVID-19 pandemic. In the United States, the number of African American business owners plummeted from 1.1 million in February 2020 to about 640,000 in April of that year, Broughton said.

Arizona has several programs and organizations to combat the wealth disparity gap and assist the launch and success of Black-owned businesses, including the UPI Loan Fund, Foresight Foundation and S.E.E. M.E. (Social and Economic Equity for Minority Enterprises).

“If we can continue to get them the opportunities that they deserve,” she said, “then ultimately what we’re doing is creating a space for generational wealth and bridging that disparity gap that exists within our community.”

As a business owner herself, Garmon said she has the same hopes as other Black-owned businesses – to be “recognized for our value, what we bring to the table and to be given opportunities.”

Sayles said her dream for FernDiggidy is to sell her sweets in major grocery stores nationally, and to some day open a storefront.

She encouraged other Black business owners to never give up on their goals, despite economic challenges.

“We have a history of being determined, constantly fighting and never giving up, so with our dreams and goals we need to continue to do that,” Sayles said.

Despite the challenges they face, African Americans are one of the fastest-growing demographics in Arizona, Broughton said, and they’re key to the success of the economy.

“Everyone wins when we invest in our Black businesses and our neighbors – for Arizona to thrive, attract industries and be a place people want to live, work and raise their families,” Broughton said.

“The ecosystem needs to shift from solo efforts and start working as a collective. Arizona must make intentional targeted investments of political, social and business capital as a priority and begin to build a better ecosystem for Black-owned businesses and entrepreneurs.”