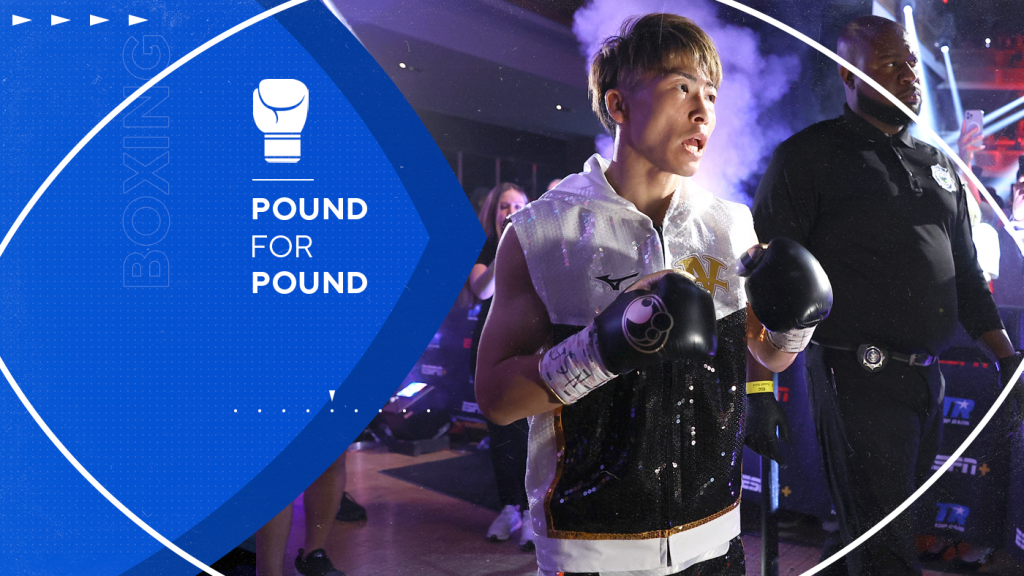 Despite how crowded the top of boxing’s pound-for-pound rankings have been in recent years, with everyone from Canelo Alvarez and Vasiliy Lomachenko to Errol Spence Jr. and Terence Crawford securing the top spot at various times, Japan’s Naoya Inoue continues to separate himself from the pack.

The three-division champion became the first undisputed four-belt titleholder in bantamweight history on Tuesday morning when he patiently broke down and finished unheralded WBO champion Paul Butler, whose gameplan was undoubtedly built upon survival and nothing else.

Inoue, 29, is the most explosive and well-rounded boxer in the game today with scary power in both hands that continues to carry up in weight with him as his dare-to-be-great reputation evolves before us.

Having cleaned out a trio of weight classes, Inoue has announced his intentions of moving up to 122 pounds, where talented divisional luminaries like Stephen Fulton Jr., Murodjon Akhmadaliev, Brandon Figueroa and Luis Nery reside. The challenges will only get stiffer for Inoue from here on out, but it’s unquestionably the type of challenge he prefers to take.

Inoue initially won his first world title in just his sixth pro fight and became a two-division champion two fights later. He captured a title in a third weight class in just his 11th fight and while his status as P4P best is not quite unanimous across the sport, Inoue continues to change minds with each stunning performance.

Using a criteria that takes into account everything from accomplishments to current form, let’s take a closer look at the top fighters inside the ring. Below is the latest Pound for Pound rankings update after Inoue’s win in December

At 29, the Japanese “Monster” is operating at the peak of what is becoming an all-time great career. The three-division champion added undisputed status at 118 pounds to his resume by finishing an overly cautious Paul Butler to become the first four-belt champion in divisional history. Inoue is expected to move up to 122 pounds next, where there are no shortage of elite foes.

The only fight that makes sense for Spence is an undisputed showdown with WBO champion Terence Crawford for all four titles. Sadly, the negotiations unraveled and left behind heavy certainty that a deal of any kind takes place in 2023. The next best pay-per-view option for Spence could be former champion Keith Thurman.

No one has ever questioned Crawford’s talent. But the 35-year-old promotional free agent pulled out of talks to fight Errol Spence Jr. in November for the undisputed welterweight championship. “Bud” scored a thunderous knockout of David Avanesyan in his lone appearance in 2022 as eyes continue to look for the unification matchup.

The combination of a light heavyweight title loss to Dmitry Bivol and an uneven decision win over 40-year-old Gennadiy Golovkin in their trilogy has Alvarez slipping just a bit at age 32. Left wrist surgery is expected to keep him out until at least May 2023, if not September.

Usyk’s professional run has been as decorated as it has been perfect. The former undisputed cruiserweight champion even has a strong argument for best fighter in the sport after defeating Anthony Joshua in their August rematch. An undisputed title bout against Tyson Fury will have to wait until 2023 as Usyk recovers from nagging injuries.

Criticized at times for playing it safe in the past, Bivol was anything but in his career-making victory over pound-for-pound king Canelo Alvarez. The 175-pound titleholder was even more explosive in a convincing shutdown of unbeaten Gilberto “Zurdo” Ramirez in November which might have secured Fighter of the Year honors for 2022.

With unified champion Oleksandr Usyk idle nursing multiple injuries, the 34-year-old “Gypsy King” chose to stay active in a largely unnecessary trilogy bout against Derek Chisora. An undisputed summit awaits Fury in 2023 although he has been just as vocal about wanting to fight Joe Joyce and Anthony Joshua.

Although he was stripped of his two 130-pound titles on the scale, Stevenson still turned in a commanding performance to widely outpoint former Olympic gold medalist Robson Conceicao in September. A move up to lightweight is next and the 25-year-old phenom has already called out undisputed champion Devin Haney.

It’s about time “The Dream” received his flowers as one of the best boxers in the game. The 23-year-old made a strong case for consideration in the Fighter of the Year voting with a second straight decision win over former champion George Kambosos Jr. in Australia. Haney can simply do it all.

After sitting out for nearly one year while serving on the frontlines of the conflict in his native Ukraine, the former P4P king nearly got more than he bargained for against former sparring partner Jamaine Ortiz in October. Lomachenko made the necessary adjustments to secure the win and keep hope alive for a showdown against Devin Haney.