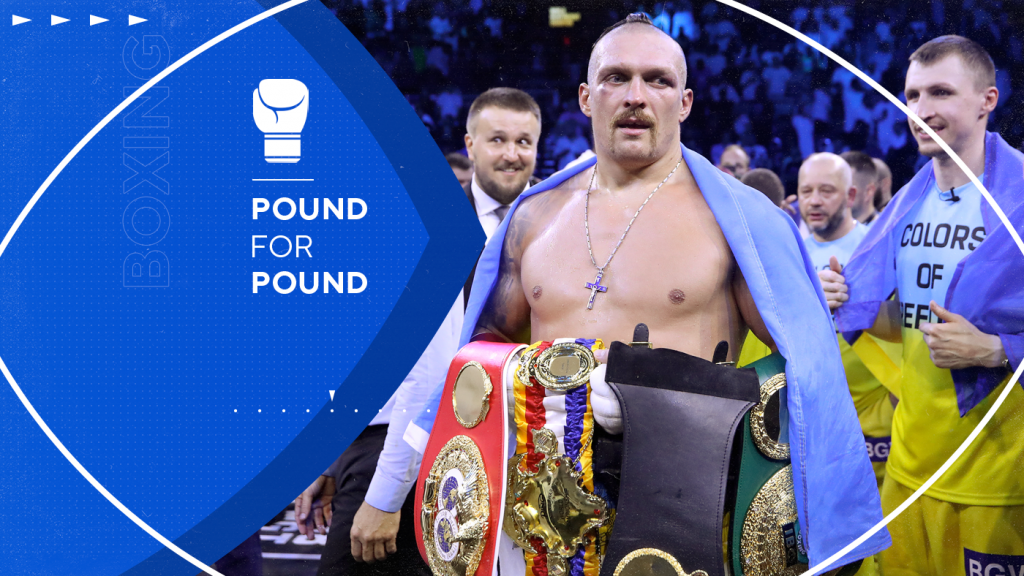 How does one measure pound-for-pound greatness in a sport with so many weight divisions and multiple titleholders in each one?

Everything from perceived skill set to overall accomplishments can usually be enough to separate although sometimes it comes down to the hardest element to clearly define as any other: intangibles.

In the first title defense of the three heavyweight world titles he won against Anthony Joshua last fall, unbeaten Oleksandr Usyk proved in last weekend’s rematch just how much his intangibles — from ring IQ to mental toughness — has allowed him to make such an incredible statement in just 20 fights.

The former undisputed cruiserweight champion now finds himself on the doorstep of becoming the first four-belt champion in heavyweight history. And he scored the gutsy second win over Joshua with an entire nation on his shoulders just months after leaving the frontlines of the Ukraine-Russia conflict.

Usyk was also forced to survive a defining moment of truth late in the rematch when Joshua hurt him to the body in Rounds 8 and 9, and looked to be closing in on a stoppage. Not only did Usyk bounce back in a big way by opening Round 10 as the aggressor, he walked through a right cross from Joshua that would’ve flattened most opponents and hurt Joshua in the championship rounds.

Despite giving up size and power in this super heavyweight era, Usyk continues to show he has other worldly guile to pair with his world-class technique as a former Olympic champion. A victory over 6-foot-9, WBC champion Tyson Fury, in which the 6-foot-3 Usyk would be an understandable underdog, would be his most impressive to date and cement him not only within heavyweight immortality but as the undisputed pound-for-pound king of boxing today.

Using a criteria that takes into account everything from accomplishments to current form, let’s take a closer look at the top fighters inside the ring. Below is the latest Pound for Pound rankings update after Inoue’s destructive TKO in June.

The best in the world seemed to find his ceiling as far as dramatic rises in weight are concerned when he dropped a unanimous decision to unbeaten WBA light heavyweight champion Dmitry Bivol. Up next, Alvarez will defend his four-pack of super middleweight titles against rival Gennadiy Golovkin in their September trilogy.

The Japanese “Monster” needed just two rounds to finish off 39-year-old legend Nonito Donaire in their June rematch to unify three of four titles at 118 pounds. Inoue’s power remains scary, but his technique and I.Q. are often overlooked. He has teased a move up to a fourth division after his goal of becoming undisputed bantamweight king.

Despite a 17-month layoff and surgery to repair a detached retina, Spence returned looking better than ever in his demolition of Yordenis Ugas to unify three of four world titles. The only fight that makes sense next is an undisputed showdown with WBO champion Terence Crawford, which is currently in discussion.

Crawford made an incredible series of adjustments to slow down and finish Shawn Porter in their November pay-per-view clash. As a network and promotional free agent, the time has never been better for Crawford to seek a career-defining test for all four welterweight titles against Spence.

Usyk’s professional run has been as decorated as it has been perfect. The former undisputed cruiserweight champion even has a strong argument for best fighter in the sport after defending the trio of titles he took from Anthony Joshua by winning their August rematch. The only fight that makes sense is the biggest of all: Tyson Fury for all of the belts.

Is he really retired? The 33-year-old “Gypsy King” has said a lot of things recently in the aftermath of his thrilling knockout of Dillian Whyte in front of 94,000 fans. But if Fury truly wants to leave his mark on this heavyweight era, he will need to further unify titles against Oleksandr Usyk to crown the division’s first four-belt undisputed champion.

The ongoing conflict in his native Ukraine forced Lomachenko out of a possible title bout against former unified lightweight king George Kambosos Jr. But Lomachenko has left the dangers of battle to enter training camp for his Oct. 29 return against former sparring partner Jamaine Ortiz.

Already being compared to a young Floyd Mayweather, the 24-year-old southpaw produced a surgical dismantling of fellow unbeaten titleholder Oscar Valdez in their April title unification. Stevenson’s speed, technique and IQ are off the charts. The future is now.

Criticized at times for playing it safe in the past, Bivol was anything but in his career-making victory over pound-for-pound king Canelo Alvarez. Bivol acted the part of the bigger man and failed to show Alvarez any respect in the manner that he fought him. A November return against unbeaten mandatory challenger Gilberto Ramirez is up next.

Fulton capped off a breakthrough 2021 with the most thorough performance of his career in widely outpointing former unified champion Danny Roman in June. “Cool Boy Steph” is among the most diversified threats in the game and openly covets an undisputed fight against fellow unified champion Murodjon Akhmadaliev.