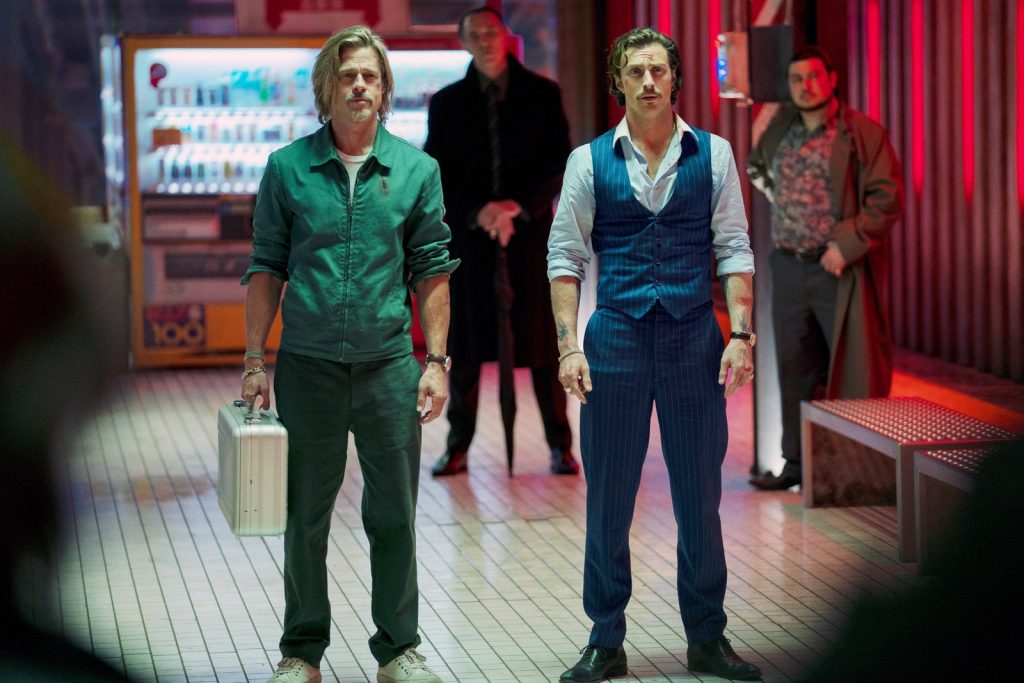 Ladybug, Brad Pitt’s character in the David Leitch action movie Bullet Train, is an ex-ex-assassin who’s decided to return to the biz, which lands him on one hell of a ride aboard a high-speed, Kyoto-bound train in Japan. While we never learn where, exactly, Ladybug is from, his incredibly hip workwear suit, dark-rimmed glasses, and cheeky bucket hat make it seem like he stepped out of a menswear blog and onto a train platform in Tokyo.

For costume designer Sarah Evelyn, the movie—which just topped the box office for a second week in a row—was among her first back after Hollywood’s high-COVID lockdown, which brought“a certain intensity to the environment [and] the need for fun and exploration and doing something risky and taking big swings.” She started out by reading the Kōtarō Isaka novel the film is based on, imagining what people might wear in “a Japanese retro-futuristic situation.”

“Our first meeting that we had, David, and Brad, I feel like we really workshopped this character and right off the bat,” said Evelyn, speaking from the set of another Leitch project in Australia. One crucial detail came from their star. “Honestly, it was Brad who was like, ‘I want to be wearing a bucket hat. I want to [look] like I had retired and I was on a dock fishing.’” (One could interpret this to say as much about where Brad’s head has been at as it does Ladybug’s.)

They tried out all sorts of different hat silhouettes, glasses frames, and jackets, and talked color and composition: “‘Was it going to be a coach’s jacket? Was it going to be a work jacket?’ Brad is very design leaning, just in terms of design as an intellectual and really creative process,” Evelyn recalled. “The best thing you can get from a collaboration is an education. He’s very studied in all sorts of different aesthetics so I [got] to access, kind of tap into, his knowledge.”

Pitt had the idea that his character would have a bit of Columbo in him, this “idea that you wouldn’t take him seriously and you wouldn’t necessarily think he was dangerous, and that gives him an edge [regarding his] character’s own relationship to danger and violence.”

They landed on a custom bucket hat—in “light beige, narrow-wale corduroy”—with a classic work jacket and matching pants in deep green twill Underneath the jacket was a custom T-shirt “from our fictional fishing store, which was called ‘Master Baiters.’”