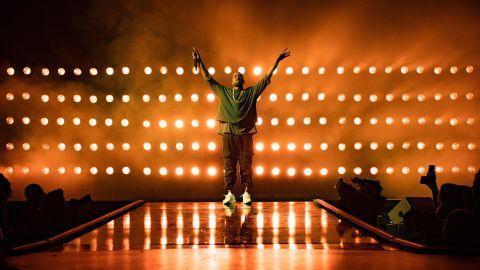 Ye — formerly known as Kanye West — has lost partnerships with fashion brands including Gap, Balenciaga and Adidas following his antisemitic comments in recent weeks. Now, questions remain about the business that helped propel Ye onto the fashion scene in the first place: Music.

Since 2004’s “The College Dropout” — his critically acclaimed and commercially successful debut album — Ye has been one of the most popular and notable artists in the world. He has had countless hits and 10 number-one albums, according to Billboard.

But all of that could be at risk due to the performer’s recent behavior and comments.

Over the past month, Ye has garnered an intense backlash by wearing a “White Lives Matter” t-shirt as well as making threats on Twitter against Jewish people. That has led retailers, social media platforms, fashion and entertainment companies to abandon him in droves.

But what does this all mean for Ye’s music career?

Universal Music Group — one of the biggest record companies in the world — said Tuesday that its relationship with Ye ended in 2021, adding that there’s “no place for antisemitism in our society.”

“Def Jam’s relationship with Ye as a recording artist, Def Jam’s partnership with the GOOD Music label venture and Ye’s merchandise agreement with Bravado all ended in 2021,” UMG said in a statement to CNN Business.

The company added, “we are deeply committed to combating antisemitism and every other form of prejudice.”

Serona Elton, professor of music industry studies at the University of Miami’s Frost School of Music, believes that Ye’s music career now needs to be broken into two parts: “What happens with his existing music in the marketplace? And what happens with any new music he might create?”

“Certainly, there will be people who have changed the way they feel about him, and their mind will be made up from now on,” Elton said. “But there will be others, who either are uninformed about the situation or simply don’t care about his views, that will choose to focus solely on his artistry.”

Some have already stopped listening.

Streams of Ye’s songs plunged by 23% in the United States between October 13 and October 20 and airplay fell by 13%, according to Variety. This has led some to ask if his songs should be banned by streaming services such as Spotify

“I think music services are generally not in the business of assessing the moral standing of the artist,” she said.

Elton pointed out that singer R. Kelly, who was convicted on multiple child pornography charges in September, has not had his music removed.

Spotify won’t remove Ye’s music unless his label asks for it to be removed, Spotify CEO Daniel Ek told Reuters on Tuesday.

“It’s really just his music, and his music doesn’t violate our policy,” Ek said. “It’s up to his label, if they want to take action or not.”

As for Apple Music, it did not immediately respond to CNN Business’ request for comment regarding Ye’s music.

One area that could see a financial impact for both Ye and Universal Music Group is the licensing of his music.

Listeners may continue to buy his albums, go to his concerts and stream his songs even after the latest backlash. However, it’s a steeper hill to climb to convince film makers, TV producers and advertisers to pony up big money to associate with Ye and his songs — no matter how popular his music might be.

“I’d be surprised if you saw Universal or any company out there be willing to invest in actively trying to promote Ye’s songs for licensing opportunities,” Elton said. “I think they’ll redirect their energies elsewhere.”