It’s been a busy—and supremely stylish—week for the actor and self-proclaimed “Jaddy” (that’s Jewish Zaddy) Brett Gelman. First came the premiere for his behemoth of a show, Stranger Things, which returns for its feverishly anticipated fourth season next week. Then, Gelman popped over to the Metropolitan Opera House to catch the premiere of the new Downtown Abbey movie. He had a secret sartorial weapon for both red-carpet appearances: head-to-toe looks from Bode.

When Bode stormed the scene in 2016, the label quickly won over fashion insiders and downtown arty types, thanks to American designer Emily Bode’s uncanny ability to turn vintage textiles into covetable workwear-inspired fashions. In recent years, though, Bode has leaped into the realm of celebrity style in a big way—the clothes have shown up on everyone from Harry Styles to Ethan Hawke to Kieran Culkin. And this week, Gelman went for full-bore, maximalist Bode.

First up was a delightfully eccentric outfit consisting of a green suede jacket (those fringes!), white embroidered linen shirt, and Technicolored striped pants. (When you’re showing up for the premiere of one of Netflix’s most beloved shows, you have to go all-out.) The next night, he wore a similarly maximal look with a cross-stitch embroidered jacket, ivory lace-crochet shirt, and earthy suit trousers. Both outfits were all-Bode down to the black leather house shoes. The cherry on top of each look is the red-tinted frames from the South Korean eyewear brand Gentle Monster.

Wearing one of these outfits would be a style swerve, but two of them in two days is as expert-level as it gets. Perhaps Gelman’s background in comedy and his penchant for committing to the bit is the magic—Gelman has embraced the Bode look with everything he’s got, and his red-carpet style is all the better for it. 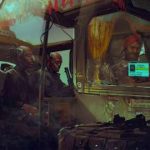