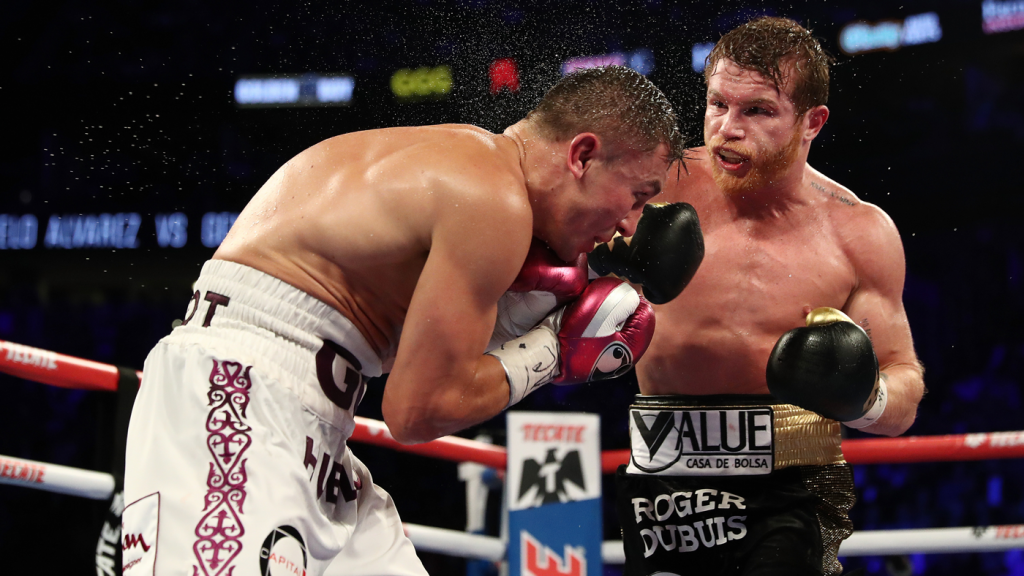 The two battled to a split draw in their first meeting, a fight many felt that Golovkin deserved to win. Judge Adalaide Byrd, no stranger to controversy, turned in an indefensible 118-110 scorecard for Alvarez. Golovkin outlanded Alvarez 218 to 169 in total punches in that September 2017 bout.

They rematched the following September, with Alvarez winning a majority decision. Again, many felt Golovkin had done enough to have earned the victory. CBS Sports scored the rematch 116-112 for Golovkin. Yet again, Golovkin outlanded Alvarez in total punches, which is not a perfect measure to score a fight, but did show that Golovkin was able to touch Alvarez frequently.

Those first two fights saw Golovkin installed as a slight favorite over Canelo given his reputation and incredible knockout streak earlier in his career. But with how things have played out for the veteran — and the explosion into superstardom for Alvarez — the Mexican enters the trilogy as a massive favorite of -500. Of note, Alvarez was around the same price for his fight with Dmitry Bivol in May where he suffered his first loss in nine years by decision.

“This fight is very important for my legacy because it will remain in the history of boxing after this fight. That’s why we fought the three times, right? I think this is one of the best rivalries in boxing history.”

The other fight of note brings the return of Jesse “Bam Bam” Rodriguez  as he looks to defend his WBC super flyweight title against Israel Gonzalez in the co-feature. Rodriguez, 22, is a perfect 16-0 with 11 knockouts in his young career. He is coming off big wins over top names in the super flyweight division, including a TKO of Srisaket Sor Rungvisai and a decision over Carlos Cuadras to earn the WBC title at 115 pounds.

To open up the PPV festivities, a long time veteran kicks things off at super middleweight. Gabriel Rosado is back as he looks to get back in the win column against Ali Akhmedov. Rosado, 36, shocked many with his thunderous knockout of Bektemir Melikuziev in 2021. The veteran has consistently failed in step-up fights throughout his career, but turned away the rising contender with one of the best finishes of the year. He followed that up with a pair of losses against Jaime Munguia and Shane Mosley Jr., but a win over Akmedov could earn him another big payday.

As with any major fight, sportsbooks have laid out a variety of intriguing lines for the matchup. With that in mind, let’s take a look at two of the best bets to make ahead of the third bout between Alvarez and Golovkin (lines provided by Caesars Sportsbook).

There are several factors making an Alvarez stoppage win an appealing play here. This fight will be contested at super middleweight, a weight where Alvarez has proven truly dangerous. It’s also a weight that Golvokin has not fought at to this point. Meanwhile, in recent fights, Golovkin has looked extremely vulnerable to body shots against lesser punchers than Alvarez. One of Alvarez’s best qualities is his ability to throw to the body, which could be very bad news for GGG. Alvarez has admitted that he’s looking to stop Golovkin in this fight and he likely means it, wanting to put a stamp on a rivalry where it can be said Golovkin has gotten the better of the first two fights. Whether that comes from a body shot or simply using body work to open Golovkin to a powerful shot to the head, it feels likely enough that getting +150 makes for a good line.

All the logic of the previous bet is at play here. Alvarez is the bigger puncher and Golovkin has never tasted big power at 168 pounds. Add in Golovkin’s vulnerability and we can double down on the knockout by calling it under 9.5 rounds here. Depending on your confidence that Alvarez can crack Golovkin, and how quickly you think he can do so, you could go to under 8.5 rounds at +250 or under 7.5 at +330. If you want an extra three minutes of safety, under 10.5 is +175. Still, we like 9.5 as the right balance of aggressiveness and payout.