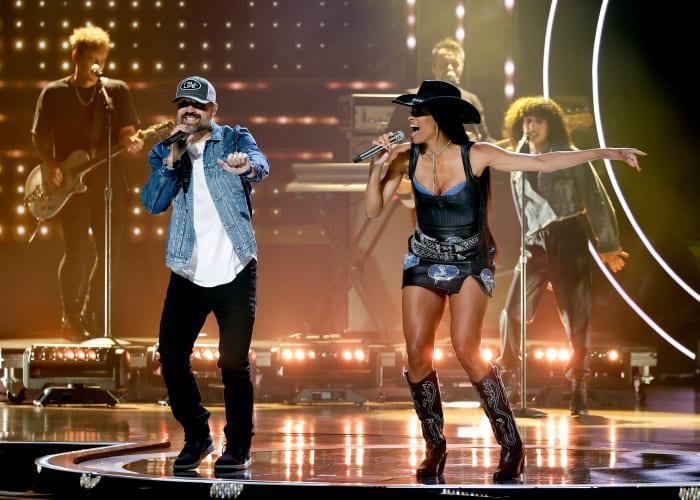 It’s the genre crossover of the year!

Late last week, Ciara surprised her Instagram followers with some unexpected news: she was going country. Just a few days later, she stepped foot on stage with Walker Hayes at the 2022 CMT Artists of the Year ceremony to perform the country artist’s track “Ya’ll Life,” which aired on Oct. 14.

That same day, Hayes released a new version of the song with Ciara featuring on the single, and she seems to be having the time of her life living that ya’ll life.

“My 1st Country Show live performance! Wow!!! Thanks for having me @WalkerHayes @CMT!! Y’all Life 🤟🏽,” the singer wrote on Instagram shortly after their duet. She shared a video on the platform full of performance clips, backstage photos, and even a dressing room a cappella sesh.

The opening shot showed the “One, Two Step” songstress strutting down a hall backstage, passing by equipment cases, spare risers and microphone stands as she showed off her outfit for the evening: a black leather dress with what appears to be distressed denim surrounded by glittery appliques on the skirt, a rhinestone-edged denim bra peeking over the top of the bust, paired with a black cowboy hat, black cowboy boots, and a black belt, all embellished with sparkling stones.

The clip transitioned into performance footage from the evening, which was interspersed with a gorgeous black-and-white shot of the star, followed by a similar shot in color. The footage resumed before flashing to another shot of the “Goodies” singer posing in the backstage hallway with her left leg off the floor and her right hand held up in the air. A few more BTS shots were sprinkled into the mix, including a few with Hayes.

The music—the new studio recording of the track—quieted down as the video changed to show the two having fun in one of their dressing rooms. “Hey, hey!” Ciara cheered, a big smile on her face as the camera started rolling. “Okay, Walker, what kind of life are we living?” she then asked.

“We living that-” he said before cutting himself off to start singing the phrase instead. The two then broke out into an a cappella version of the new song.

“Hey!” Ciara cheered again when they were done, holding up the “Let’s Rock” sign with both hands as she added, “Ya’ll life!”

Followers were delighted by the change of sound.

“Love it!! ❤️ Now can we get a Country Album from you bcuz you definitely can pull it off,” one fan said.

Could this be a new musical venture for the R&B artist?