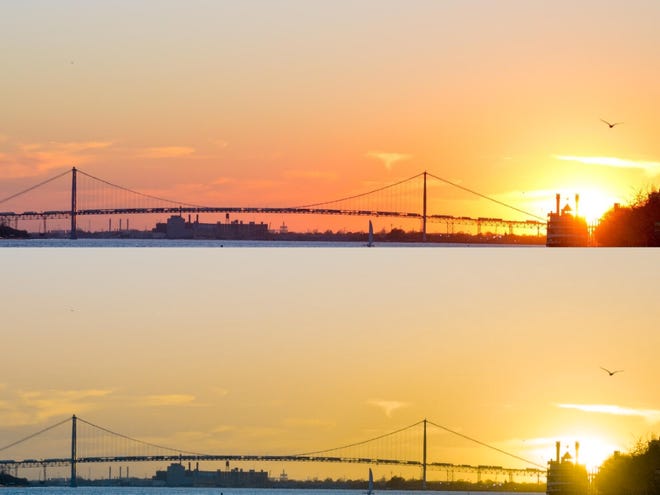 Standing at the top of the hill at William G. Milliken State Park, with a view overlooking the Detroit River, Eric Holland could see the red leaves and purple flowers for the first time.

Usually, everything looks like a green blob to him, he said. When the colors are stacked on top of each other, it can be hard to tell the difference.

With his new EnChroma glasses, the world is a little brighter.

Two metro Detroiters, Holland and PJ Veltri, were gifted personalized glasses at the event, in addition to the two scenic viewers — made for people with colorblindness — installed at the park.

The two EnChroma “special spotting scopes” are planted into the ground on top of the hill for anyone to look through. The stationary telescope was funded by the U.S. Fish & Wildlife Service’s Detroit River International Wildlife Refuge.

“They really add a nice feature for people who are colorblind and create some greater accommodation here for everyone,” he said.

Veltri, a 32-year-old theater technical director, said he first signed up for a pair of the glasses in 2016, and he was amazed by them.

He said he has gotten used to being colorblind, but it does still impact his day-to-day life. When he paints for his job, for example, he has to be “very careful” about choosing color.

“When I play Wordle, it’s green and yellow boxes, and if it’s the middle of the night, I cannot tell what those are,” he explained. “And thankfully, somebody put a Colorblind Mode into that, so now it’s blue and orange for me.”

He said it’s a common misconception that all people who are colorblind cannot see any color.

“I can still see color,” Veltri said. “The sky is blue, the grass is green. It just might look a little bit different to you. The issues come up more when (colors) are on top of each other.”

Holland first discovered he was colorblind when he took his military entrance exams at 17. He has been wanting a pair of glasses with this technology for a while now, he said, and it seems like it’s slowly becoming more accessible.

“We might be going Up North after fall colors start coming out, because I always love fall colors, and I think I’ve missed quite a bit compared to what I’m seeing here (with the EnChroma glasses),” Holland said.

Putting on the glasses in real life is not like the videos you see online where the colorblind people fall to the ground and immediately start crying, Veltri said. It takes a minute to adjust, and then everything starts to become more vibrant and there are bursts of color he couldn’t see before.