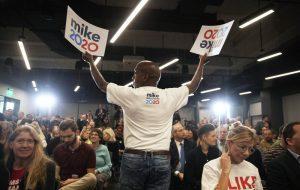 If you’ve spent any time around political campaigns this year, you’ll have heard the stories. One candidate started field operations — knocking on doors, organizing volunteers, speaking directly with voters — months later than usual because the campaign couldn’t find anyone to take charge. Another had no press team until after Labor Day, despite being locked in a toss-up race. Quite a few, in fact, have gone the entire campaign cycle without a single press staffer.

The Great Resignation — that much-reported, post-COVID shutdown trend shaking up all sorts of industries — hit politics just in time for the midterm elections. I’m on conference calls daily with Democratic congressional campaigns across the country, and the lament is always the same: Our campaigns are understaffed and can’t make essential hires.

There are good reasons for this. After all, why would a talented recent college graduate, already burdened with student debt, sign on to work around the clock at a job that would require them to move across the country and that might not pay enough to cover basic needs?

The current generation of smart, energetic and idealistic young people — the kind of people drawn to work in politics — understandably want livable salaries, healthcare and some semblance of work-life balance.

Modern campaigns could afford to provide all of that. There’s never been more money in politics. It’s just a question of priorities.

Spending on U.S. House and Senate races alone is on track to hit $9.3 billion this year, Open Secrets reported last month. The previous midterms record was set in 2018, when spending hit $7.1 billion, adjusting for inflation. Democrats and Republicans have each poured more than $300 million just toward purchasing airtime for cable and broadcast TV ads for House races from mid-August through election day. And campaigns for all levels of office across the nation have already put more than $6.4 billion toward ads in this election cycle — more than in either 2018 or 2020, a presidential election year.

Astronomical sums of the war chest go to highly paid consultants and analysts who crunch numbers, run polls, create ads, buy airtime and earn hefty commissions — up to 15% — every time a piece of political advertising sees the light of day. But money for field operations has simply not kept pace with this flood of cash — especially since 2020, when the party imposed a COVID-19 social distancing prohibition on in-person campaigning for Congress, with the near-disastrous results we know all too well.

There’s no way to reach voters at scale without using mass media. But as the New Republic’s Walter Shapiro noted in a thoughtful recent research roundup, TV ads have a limited impact. Their effects don’t last long. And while they can change voters’ perceptions of a candidate, they don’t get people out to vote.

Winning elections is all about turnout. This means that in every election cycle, parties and candidates need campaigners to deepen their relationships to the communities they organize, to ring doorbells, and to make sure voters know where and how to cast their ballots. We need to pay staffers to train and run volunteers who can get voters fired up and ready to go to the polls.

We know that showing up for voters, in person, works. In 2021, the historic wins by Democrats Raphael Warnock and Jon Ossoff, who flipped longtime Republican-held seats in Georgia and secured their party’s narrow majority in the U.S. Senate, have been widely attributed to more than a decade’s worth of grass-roots organizing led by Stacey Abrams and a huge rise in new voter registrations in communities of color in particular.

There have been efforts by many campaigns in recent years to address the issue of long hours and low pay. But in general, pay remains low for entry-level staffers — about $3,500 a month — and that pretty much guarantees that the only people who can work on campaigns are those with parents willing and able to help support them. And most of those fortunate few have tended to be white. That’s not a good look for a party ostensibly dedicated to fighting inequality and promoting diversity as a strength.

Simply raising pay would help, as well as putting serious resources behind recruiting, training and retaining entry-level organizers, field directors and other essential campaign staff. Political campaigns desperately need diversity. They can’t rely only on young people who can afford to take these jobs.

Ronnie Cho is a former associate director of public engagement in the Obama White House and a senior political advisor for Square One, a nonprofit PAC that recruits and supports diverse, progressive congressional candidates.

Please check your email to confirm and complete your registration.

Use the form below to reset your password. When you’ve submitted your account email, we will send an email with a reset code.

Maine Voices: What can be done to pull democracy back from the edge?