UNTIL SHE STARTED a PAC to elect candidates to Congress, Dr. Anahita Dua had little exposure to the world of politics.

Dua is a vascular surgeon at Massachusetts General Hospital, where she co-directs a center focused on peripheral artery disease and limb amputation, and an assistant professor at Harvard Medical School. The 39-year-old Newton resident, a mother to two young children, has never run for office, never worked for a candidate, and ,other than a few recent contributions to Attorney General Maura Healey’s gubernatorial campaign, her only political donations have been to a PAC run by the Society for Vascular Surgery and to ActBlue, the Democratic fundraising site. She’s done a small amount of advocacy on behalf of the vascular surgery group.

In August, however, Dua took the plunge into politics, forming the Healthcare for Action PAC, a federal political action committee that aims to elect Democratic health care workers to Congress. She has raised $86,500 so far, and the PAC this week announced two endorsements and cut $5,000 checks to its first endorsed candidates – Annie Andrews, a South Carolina pediatrician, and Kermit Jones, a California physician and Navy veteran.

Dua hopes to raise $100,000 this election cycle and plans to endorse five candidates. The PAC will make the maximum allowed $5,000 donation to each, then run ads as an independent expenditure PAC, which cannot coordinate directly with the campaigns.

In a phone interview, Dua said she started the PAC because of personal experiences she had with her patients and her 5-year-old daughter. “What I’m noticing is in each realm I’m not able to do what I want to do to protect these people, whether my patients or my daughter,” Dua said. “What it feels like is if you and I are sitting on the banks of a river, and our children were dying. I said why don’t you change their diet, you said why don’t you change when they go to sleep…but someone upstream is poisoning the water. All the work and effort we spend our lives doing has minimal impact because the guy upstream is poisoning the water.”

Dua’s medical specialty is saving the legs of patients with peripheral artery disease. She said managing these diseases is not about a one-time procedure, but a host of other behaviors – using insulin to control diabetes, taking blood thinner medication, eating a healthy diet, and being able to access a specialty medical team that knows when and how to save rather than amputate a leg.

Dua said it pains her swhen she has to perform an amputation that could have been avoided had the patient been able to afford insulin or medication or get an earlier appointment with the right specialist. She said Blacks are more likely to have their legs amputated than Whites – a symptom of a lack of standardized treatment protocols, so the care provided looks different in different hospitals.

“You realize if you want what you’re doing to count, if I want my surgery to matter, I have to be in policy,” Dua said.

Dua said the tipping point for her was the Uvalde school shooting last May, when 19 children and two adults were murdered at a Texas elementary school. Dua’s own daughter started kindergarten this September at a Newton public school. Dua bought her a pink bullet-proof backpack. It probably wouldn’t stop an AR-15 bullet, but it helped Dua cope with the impotence she feels being unable to protect her child.

“I changed from sad to angry,” Dua said of her mindset after the Uvalde shooting. “What is this, I dedicated my whole life, my own health, to becoming a surgeon, getting pregnant with my daughter, raising her, and she’s going to get taken from me in the blink of an eye like that?”

Dua said she began to feel like the only way to change the country is to weigh in on national policy. “The idea is not about an issue specifically,” Dua said. “It’s about a change in the way we do things in Congress, bringing back nuanced critical thinking where you have a group of people who can work collaboratively, identify unintended consequences, and do the right thing for the country.”

Dua, a lifelong Democrat who considers herself fiscally conservative and socially liberal, said she wants to support Democrats because she agrees with Democratic positions on issues like abortion, gun control, climate change, and health care. But she is looking for Democrats who will reach across party lines and work in bipartisan ways. She said she chose to support health care professionals because she knows they are people used to working in a team to determine the best outcome for patients – skills she would like to see transferred to Congress.

There are already several medical workers in Congress. Republicans have an 18-member GOP Doctors Caucus. Democrats have three doctors and three nurses.

Ideally, Dua said, any Democrat she endorses would be willing to sit down with Marjorie Taylor Greene or Lauren Boebert, two Republican congresswomen known for taking far-right stances, to discuss  issues. Dua said she worries that Republicans and Democrats today act like they are at war with one another. “At war, you’re not using you’re critical thinking, you’re using your lizard brain, it’s fight or flight,” Dua said. She believes if members of Congress can return to a time where members of opposing parties argue at work, then meet up socially after work, “that’s going to be revolutionary.”

For now, the PAC is a two-woman operation. Dua spends her evenings fundraising. She has been joined by her friend and now finance director Chelsey Lewis, a vascular surgeon at Elliott Hospital in Manchester. 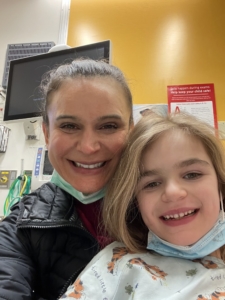 Dr. Chelsey Lewis and her daughter at a medical procedure for her daughter. (Courtesy photo)

Like Dua, Lewis got involved in politics largely because of her child. Lewis, 40, has a 7-year-old daughter with a genetic disease, a form of epilepsy. She said soon after her daughter was born, Republicans started talking about repealing the Affordable Care Act and removing insurance protections for people with preexisting conditions. Lewis said she realized that all the political issues that could affect her family – like unequal access to health care – were already affecting her patients.

Lewis, who grew up in a conservative family in Florida, married into a liberal, politically active family and moved to New Hampshire. Her sister-in-law, Leah Plunkett, is a Democrat who ran unsuccessfully for New Hampshire’s Executive Council.

Lewis said she was drawn to Dua’s PAC as a way to help vulnerable people, whether her daughter or her patients. “Health care workers have a unique opportunity to see the effects of all of these policies on every person,” Lewis said. “We know now that the hotter your climate is, the more likely you are to have a coronary or cardiovascular event…urban environments with less trees and nature are 10 degrees hotter than suburbs full of trees. Who lives in urban environments? People of color.” 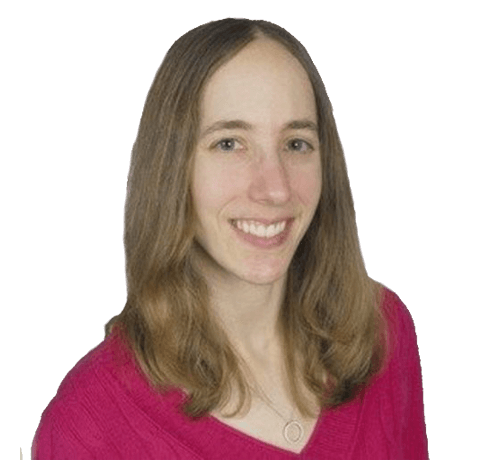 Shira Schoenberg is a reporter at CommonWealth magazine. Shira previously worked for more than seven years at the Springfield Republican/MassLive.com where she covered state politics and elections, covering topics as diverse as the launch of the legal marijuana industry, problems with the state’s foster care system and the elections of U.S. Sen. Elizabeth Warren and Gov. Charlie Baker. Shira won the Massachusetts Bar Association’s 2018 award for Excellence in Legal Journalism and has had several stories win awards from the New England Newspaper and Press Association. Shira covered the 2012 New Hampshire presidential primary for the Boston Globe. Before that, she worked for the Concord (N.H.) Monitor, where she wrote about state government, City Hall and Barack Obama’s 2008 New Hampshire primary campaign. Shira holds a master’s degree from Columbia University’s Graduate School of Journalism.

Shira Schoenberg is a reporter at CommonWealth magazine. Shira previously worked for more than seven years at the Springfield Republican/MassLive.com where she covered state politics and elections, covering topics as diverse as the launch of the legal marijuana industry, problems with the state’s foster care system and the elections of U.S. Sen. Elizabeth Warren and Gov. Charlie Baker. Shira won the Massachusetts Bar Association’s 2018 award for Excellence in Legal Journalism and has had several stories win awards from the New England Newspaper and Press Association. Shira covered the 2012 New Hampshire presidential primary for the Boston Globe. Before that, she worked for the Concord (N.H.) Monitor, where she wrote about state government, City Hall and Barack Obama’s 2008 New Hampshire primary campaign. Shira holds a master’s degree from Columbia University’s Graduate School of Journalism.

She said she was shocked to hear senators talk about abortion who lacked an understanding of basic medical facts about ectopic, or unviable, pregnancies.

“You have to have some people involved in these things that understand how policies directly affect people,” Lewis said. “Health care workers have proven they are hardworking and care about people. If they want to take their knowledge and skills and move to the next level to help more than the patient in front of them, it makes perfect sense.”