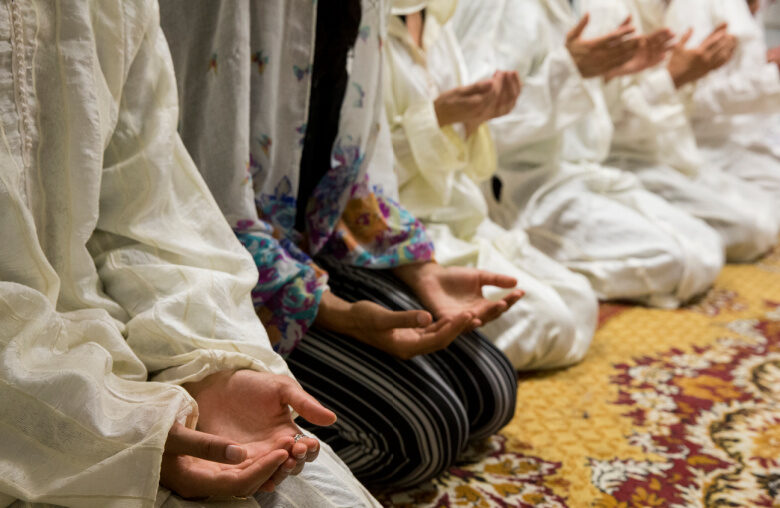 White Christian nationalism has recently come into sharper focus because of the January 6 insurrection and controversial Supreme Court rulings regarding reproductive rights and the separation of religion and state. Yet, the influence of whiteness on religion extends beyond Christianity, which often becomes equated with “religion” itself. Despite the growing number of white people converting to religions racialized as “non-white,” such as Islam, these converts attract less interest. However, a closer look at white converts who enter more racially diverse religious communities offers a unique opportunity to understand different manifestations of white supremacy that are not tied exclusively to MAGA supporters.

When I worked on a collaborative study between 2018 and 2021 that focused on Polish female converts to Islam, I was oblivious to how white supremacy might manifest. My colleagues and I interviewed 40 women in Poland and the United Kingdom, which is home to the largest Polish diaspora in Europe. When speaking with women who willingly joined the ranks of Islam, the most vilified faith tradition in Poland, I approached them with sympathy because they experience a great deal of anti-Muslim prejudice.

By and large, the findings aligned with existing research on white conversion to Islam: White people may lose some degree of their racial privilege, especially if they adopt visible signs of Islam such as a headscarf or a beard. They may be symbolically excluded from their own ethnic communities; they may be complimented on their fluency in their native language by well-meaning people; they may be asked “where are you from?” Having become unintelligible in their own communities, these white converts to Islam often seek authenticity and want to be accepted within Muslim communities. As Muslims who are racialized by both non-Muslims and Muslims, sometimes they are not accepted or welcomed with open arms in either community.

What opened my eyes to the racial dynamics of conversion was the realization that many white people, even those who are minoritized, still attempt to preserve and obscure their privilege using a variety of strategies. Initially, my colleagues and I did not ask a single question about racial identity in the study on converts. Yet, when I read the data through a critical lens that was sensitive to race, I saw that whiteness did manifest itself in the Polish converts’ responses under the guise of “blue eyes and blond hair,” “Europeanness,” “Polishness,” or “being civilized.”

The American scholar Eduardo Bonilla-Silva notes in Racism without Racists that color-blindness has its own communication style that strategically departs from old-fashioned racist epithets. Similarly, in the Polish context, race-evasiveness was expressed by a general refusal to talk about race explicitly. What was more surprising, however, was how the women we interviewed constructed racial hierarchies using Islamic vocabulary and frames.

When I analyzed the study’s data again with my colleague Joanna Krotofil from the Jagiellonian University in Krakow, Poland, different white supremacist moves became evident. Polish white female converts to Islam, or PWFCs for short, talked a lot about the need to separate religion from “culture” or “cultural baggage.” On the surface, their claim was not that different from many young second or third-generation Muslims living in the West who rejected certain traditional practices of their communities, such as early marriage for girls who might prefer to continue their education. Yet, the PWFCs’ argument did not stop there. Some said that by practicing “pure” Islam without cultural accretions, they were better and more authentic Muslims than their fellow Muslims of South Asian or North African heritage. While the call for culture-free Islam appears to be common and inspired by Islamic revivalist movements, it may have different consequences depending on who articulates it. When white Muslims call for this culture-free devotion, it stigmatizes the beliefs and practices of Muslims of color.

While Prophet Muhammad’s last sermon is often called one of the earliest declarations of human rights, its aspirational statement on race does not, however, speak to the lived reality of many Muslims of color. Many Black Muslims today openly speak about the discrimination that they experience in the Muslim community as well as in the wider society. This reality undercuts the claim of PWFCs that Muslims, including white converts to Islam, can’t be racist.

These findings led me to wonder how such defenses of white privilege might manifest in other religions to which white people convert. It turns out that there are significant overlaps. Scholars of race and Buddhism describe the phenomenon of white people attempting to gain prominence in this religion. The Black feminist scholar and practitioner of Zen Buddhism, bell hooks, commented on white American Buddhist converts:

Surely it is often racism that allows white comrades to feel so comfortable with their “control” and “ownership” of Buddhist thought and practice in the United States … Rarely have I heard or read any really prominent white person engaged with Buddhism discuss any fear of being arrogant when speaking about the subject, grappling with issues of ownership, or authenticity.

Joseph Cheah, a Burmese American scholar of race and Buddhism, adapted sociologists Michael Omi and Howard Winant’s concept of “racial rearticulation” to explain the “acquisition of the beliefs and practices of another’s religious tradition and infusing them with new meanings derived from one’s own culture in ways that preserve the prevailing system of racial hegemony.” Cheah argued that the centering of meditation by white Buddhists as the main component of Buddhism, and the incorporation of Western psychology, are racially charged. Many white Buddhists reject rituals, merit-making activities, and devotional practices found in ethnic Buddhism as “cultural baggage”; in doing so, they claim that they practice “true Buddhism.”

In a similar manner, white Sikhs’ criticism of Punjabi culture as an accretion in Sikhism was evident in a study of white and Indian Sikh identities by Simranjit Khalsa, a white Sikh scholar.  Indeed, some converts even suggested that the rise of white non-Punjabi converts to Sikhism had helped reveal the “true essence of Sikhism,” as if white converts did not bring their own cultural inflections to this religion. Some white Sikhs in Khalsa’s research confessed to intentionally avoiding Indian Sikh communities and places of worship for fear of being accused of practicing Sikhism incorrectly and denied their claim to a Sikh identity.

As long as these white claims to special authority and authenticity remain undisputed, white supremacy continues to operate below the surface. This fact is evident in white converts’ criticism of non-white believers’ so-called “culturally-polluted,” “insufficient,” or “incorrect” practice; in the denigration of their “backwardness”; in racial segregation on the basis of unfounded fear of criticism or denial of identity; or, finally, in defensive responses to critiques of white converts’ complicity in white supremacy and colonialism. Yet, white converts use their proximity to non-white believers and egalitarian religious doctrines to claim non-racist identities.

It is true that white converts may experience Islamophobia or other kinds of racialized religious prejudice and discrimination. However, whiteness can obscure how they remain complicit in upholding white privilege across other social strata, including gender, sexuality, class, professional status, nationality, and immigration status. None of these identifications can insulate white people from reinforcing racism; sometimes they merely manage to better obscure it.

Converting to religions practiced predominantly by people of color is not enough. By itself, it cannot be a ticket out of white supremacy. White converts should still engage in anti-racist work, just as all white people should.

Anna Piela is a visiting scholar at the department of religious studies at Northwestern University. She is currently co-editing a special journal issue that takes a closer look at the politics of white conversion to Islam, Buddhism, Hinduism, and Africana religions. Last year her book, Wearing the Niqab: Muslim Women in the UK and the US, was published by Bloomsbury Academic. Follow her work at her website and on Twitter @annapiela999.