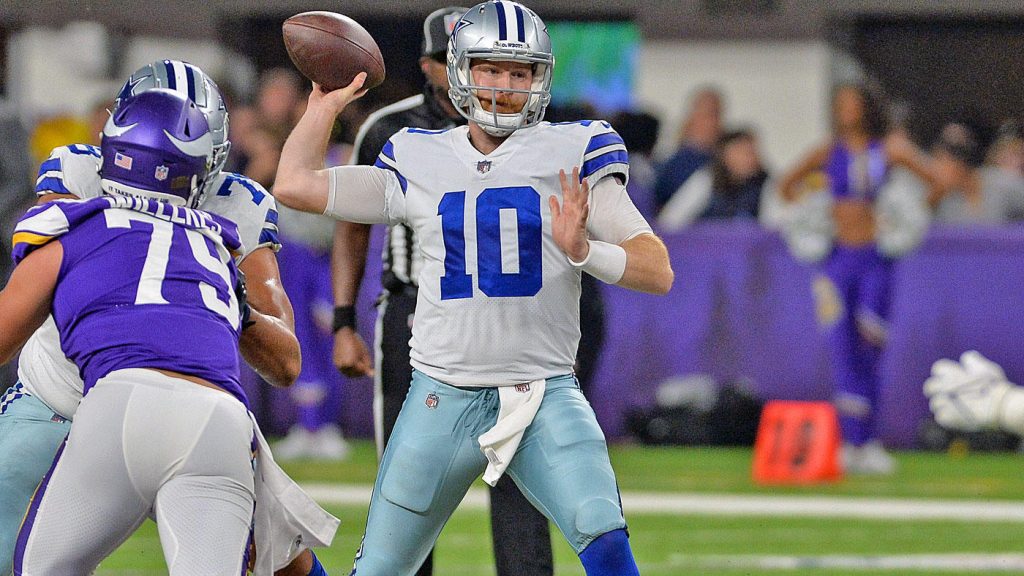 The Cowboys’ season got ugly. Fast. And now Dallas will shift from its $160 million quarterback to a former undrafted free agent, Cooper Rush.

Before you think I’m disparaging Rush by reducing him to his former status as someone who was not drafted, I will gladly remind everyone that Rush, of Central Michigan fame, had a 300-yard passing performance in his sole start of 2021, which included a come-from-behind, game-winning touchdown throw with under two minutes to play, on the road, against the Vikings. For many, MACtion never leaves the soul, and Rush was a shining example in that contest.

Now, as the Cowboys long-term sub for the injured Dak Prescott, let’s jump into Rush’s showing against Minnesota to uncover indications of what Dallas has at quarterback for upcoming games against the Bengals, Giants, Commanders, Rams and potentially beyond.

When I was a kid, and my parents presented me with the “I have good news and bad news” proposition, I always — and I mean always — asked for the bad news first. Needed to get it out of the way. I’m following that philosophy with this assessment of Rush.

Before I begin, remember, this was the first career professional start for Rush. Even for many first-round quarterbacks, the speed of the game is initially overwhelming.

In the game against the Vikings, he was 30 of 47 (!) for 325 yards with two touchdowns and an interception. Despite those gaudy figures, there were some concerning trends that arose throughout.

He was late more often than what is considered ideal and didn’t always locate defenders who were roaming near but outside of his primary line of sight as he released the football. Like here on his interception, when he looked for the slot target aligned closest to the formation running down the seam. If he’s going to make that throw routinely, Rush must look to get rid of it as his wideout or tight end clears the linebackers at the second level. Not a full second afterward.

But he waited to see the open target, and at that juncture, it was too late. Safety Harrison Smith ranged to the middle of the field, tipped the pass, and it was intercepted by the other defender.

Now, if Rush had a hose, he could be more patient with the football. While not weak-armed by any stretch, Rush doesn’t possess the cannon needed to make that type of throw late on a regular basis.

Later, on a slant to the slot receiver, Rush did not acknowledge the lurking middle-of-the-field defender waiting directly in line with said slant route who easily closed the window in a flash. It led to an incompletion, was nearly picked, and even if caught, would’ve placed Amari Cooper in a horribly vulnerable position to take a monstrous hit.

While Rush did manage the pocket adequately in his NFL debut, there were a few instances of him getting mechanically lazy before throwing the football.

Not setting his feet properly, fading away from a throw, etc. He did that here after pump faking a wheel route run by Dalton Schultz.

By NFL standards, that pocket was plenty clean enough. Rush hurried the throw while leaning away from it. Bad combination. The pass was well over the head of its intended target down the right sideline.

Altogether, these were common mistakes for a youthful, inexperienced quarterback thrust into the bright lights of the NFL stage. And yes, those mistakes can lead to disastrous results for a passer and his offense.

You made it! If you’re a Cowboys fan, maybe you scrolled here first. Welcome. Rush was not all bad against the Vikings, as evidenced by his stat line. I’ll first note, he did a remarkable job taking what the defense gave him, and getting the ball out of his hands in a hurry. The latter aspect of playing quarterback is crucial, particularly for young starters and backups in relief appearances.

Rush was pressured on only 19.6% of his drop backs. That’s nothing.

But it’s not entertaining to show checkdowns, throws into the flat, and passes to open receivers on comeback routes against soft zone coverage. But they happened often for Rush in that outing against Minnesota. You’re going to have to trust me on that one.

Let’s highlight the fun, game-altering plays from the young quarterback, like the long, Cedrick Wilson touchdown. It was one of the only times — maybe the only time — Rush threw with assertive anticipation down the field. He noticed his receiver with a step on his defender angling down the middle of the field on a post.

And Rush ripped a fastball to Wilson, in stride, which allowed the speedster to showcase his yards-after-the-catch capabilities en route to the end zone.

That camera angle exhibits how exquisite the ball placement needed to be and was from Rush on that throw. Probably the most velocity he threw with all evening, too.

Then there’s the touchdown to Cooper to take the lead late in the fourth quarter. Not exactly the dreaded end zone fade, more of a touch pass up and over the cornerback in the back portion of the end zone.

Perfect accuracy again from Rush. Put the ball where only Cooper could make a play on it. Those were the two most strikingly good throws from the Cowboys’ spot starter in the victory no one really saw coming.

Ironically, Wilson and Cooper are gone, which certainly will make things more of a challenge for Rush this time around. However, if you noticed from the game footage, Rush didn’t have Tyron Smith or La’El Collins blocking the edges for him against the Vikings, either, and he managed to perform pretty well.

Dallas shouldn’t expect Rush to elevate all the weapons around him. And we shouldn’t draw any gigantic conclusions from a one-game sample size. But that’s all we have on Rush to date when it comes to contests he prepared for as the starter. And now you know what the Cowboys have to work with at quarterback as they try to manage things offensively to avoid a cataclysmic start to the 2022 season.