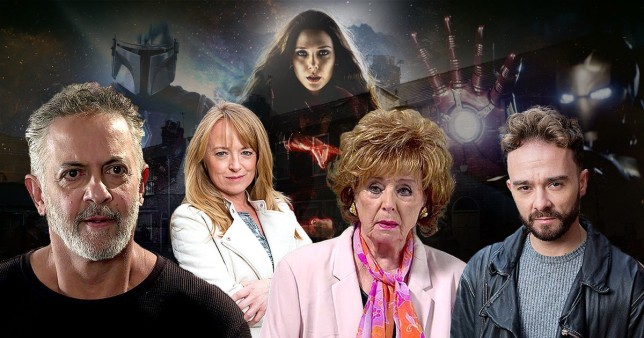 Prepare yourself for some incredible scenes on Coronation Street as the show prepares to say goodbye to Kelly Neelan (Millie Gibson) in spectacular fashion.

The climax of the story involves some amazing new technology that hasn’t been used on a continuing drama before. It’s called a volume wall and it’s what produces the special effects in shows like The Mandalorian and, on a larger scale, the Avengers movies.

Producer Iain MacLeod is hugely enthusiastic about what his team have been able to achieve with the technology, as he explains.

‘Essentially, it’s like a very new fan-dangled version of what they would’ve called a green screen or back projection back in the early days of the talkies,’ he says. ‘But basically, it means you can put your actors anywhere that you can imagine. You can essentially design a 3D world, like the surface of Mars, and you could stick Ken and Rita up there having a Mr. Kipling and a cup of tea, should you wish.’

Basically this means that the actors are working in a blank space and the background is a set of enormous LED screens. The image on the screens responds to the movement of the camera, so as the camera moves the image alters exactly as it would in real life.

While it’s an expensive technology, as Iain’s Mars example shows it means that the actors can be placed in any environment imaginable without having to leave the studio.

So location shoots and night shoots can be much more easily accomplished, and it’s particularly useful if you want to film dramatic stunts with less risk to the actors.

‘You’ve got full control over the weather effects, the lighting, the engine that they use to generate this 3D world. Just by using a little dial, they can make the sun rise up and then they can wind a dial again and the sun goes down a bit. You can then shoot all the scenes against the perfect sunset, should you wish.’

This means there’s no restriction on what can be achieved and Iain is excited by the potential it offers.

‘We did joke that there will come a point where we don’t need sets anymore,’ he says. ‘You just need a volume wall and then you can just go, bang, and you’re in the Rovers and then you go, bang, and you’re in the Kabin. We were all joking about it, but a tiny bit of me thinks in 10, 20 years that might actually be not that far from the truth, really.’

For the scenes leading to Kelly Neelan’s exit, the team knew they wanted to do some spectacular stunts and, using this techology, they could accomplish their vision for how it should look.

‘If it works as well as we think it is working, and I’ve seen the rushes and it seems to be, then it might be something that as a genre more and more shows come to use when they want to do something big and spectacular, because you can just make it that bit extra,’ Iain says.

‘What I have seen of it is incredible and very exciting. So yeah, it promises to be good stuff.’

Includes exclusive content, spoilers and interviews before they’re seen on the site. Find out more »