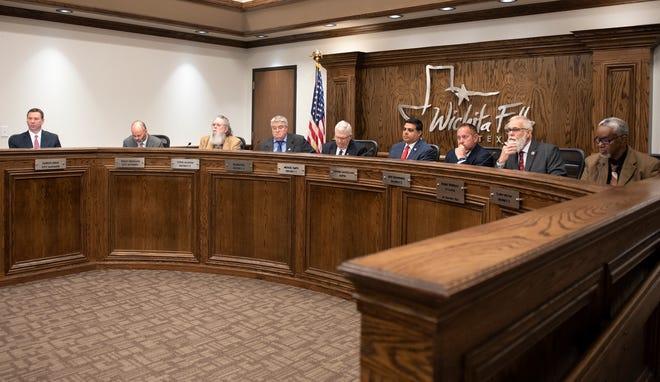 Wichita Falls city councilors moved consideration of a lawsuit against some major entertainment companies off the agenda when they met Tuesday but began the new fiscal year by allocating federal funds and spending local money.

Councilors were to look at hiring attorneys to join 25 other Texas cities in a lawsuit against Netflix, Disney and Hulu for not paying certain fees for streaming entertainment programs to consumers. The item was moved to discussion in closed session and no action was taken.

The council allocated nearly $2 million of the $29 million the city received in federal COVID-19 relief funds to three projects. The lion’s share, $1,500,000, went for grants to local nonprofit organizations, with a special panel to draw up a list of which groups share the money. Another $250,000 went to the arts community through the Wichita Falls Alliance for Arts and Culture. The Wichita Falls City-County Health District received $173,800 to remodel two 1960s-era bathrooms at the district’s facilities.

The city will pay more than planned on some heavy equipment. Since the council passed a fiscal-year budget last month, the costs for a new trash compactor for the landfill and a new street sweeper went up substantially. Councilors allocated an extra $365,000 to pay for the purchases.

In other business, councilors:

Councilors also heard a plea for funding from Jessica Dean of Wichita Falls Sober Living, a help organization for people fighting addiction. Dean asked the council for help with funding to acquire Narcan, a medication that can reverse the effects of opioids like fentanyl. Overdoses of fentanyl are blamed for at least 18 deaths in Wichita Falls in 2022. Dean said her group offers training and distribution of Narcan. City Manager Darron Leiker suggested Dean apply for some of the funding the city is allocating to nonprofits.