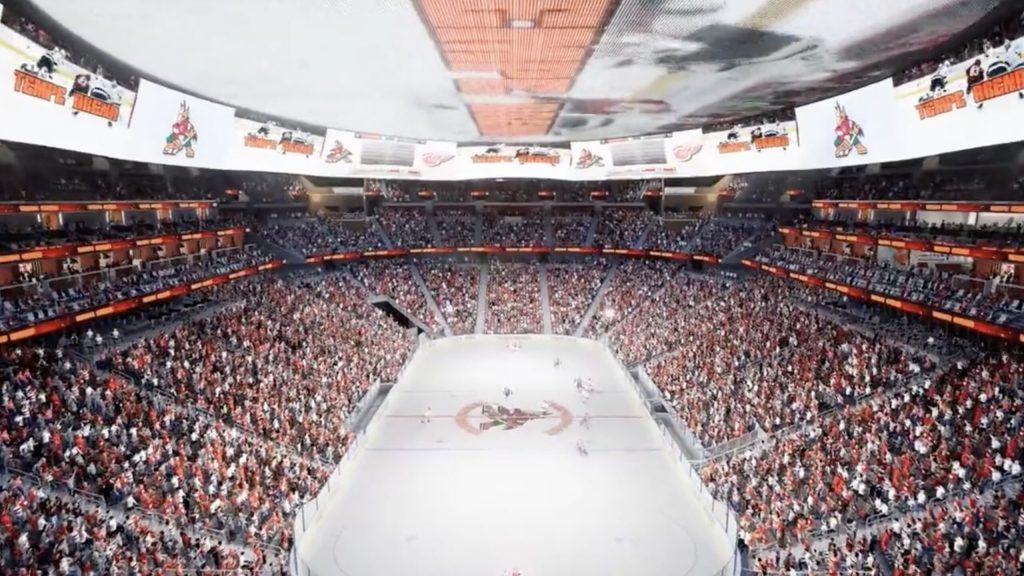 Coyotes president and CEO Xavier A. Gutierrez told reporters on Thursday that the Tempe City Council will vote on the team’s proposed arena and entertainment district on Nov. 29, but sources told PHNX that the council is also likely to refer the proposal to referendum in November, leaving the vote in the hands of Tempe citizens.

While the vote on Nov. 29 will provide clarity on council’s opinion of the Coyotes’ proposal — on the entitlements and on the general plan amendment — a referendum would be the ultimate vote in determining whether the project begins. That vote would be held in 2023 at a date yet to be determined.

There is also the potential for litigation from any number of parties, including Sky Harbor International Airport, the City of Phoenix, the Goldwater Institute or local citizens groups.

“It depends on the upgrades you want to have and the premium packages that you’re looking for, but we’ve always anticipated around 23 to 24 months,” Gutierrez said of the construction timeline.

As for the cleanup timeline: “There is a site right next to it that has given us a lot of insight,” Gutierrez said. “We also did a fair amount of [soil] borings during the RFP process that the city allowed us to do. So we think it’s anywhere between six to eight months.

“It’s actually not as significant, given what we already know. Clearly, one of the things that has come out that we’ve always told people is: You have to shore up the levee. So we’re going to, in essence, build a bathtub, which is great from a foundation perspective, but also, we’re right next to Tempe Town Lake, so you’re going to have to shore up that levee.”

The Coyotes have proposed an approximately $2.1 billion development that includes a hockey arena, hotels, about 1,600 apartments, retail stores, restaurants and a sports book. The team says that the project would be privately financed, although it hopes to use a portion of city sales tax revenue generated by the development to help pay for $200 million in additional costs.

The Coyotes would need to remove an estimated 1.5 million tons of trash from the site. The team would then need to remediate the site before construction begins at a cost of approximately $70 million. Per the original proposal, the team would pay $40 million for the east parcel cleanup and commit $8 million toward remediation of the west parcel, with the remaining costs paid through bonds. The bonds would also pay for such infrastructure as electric lines, water lines, sewer lines, roads and a parking garage at the northeast corner of the property that would be owned and operated by the city.

The team says that the project could generate $154 million in new taxes for the city over a 30-year period, with $5.9 billion in direct spending in the city and 6,900 permanent jobs created.

Multiple media outlets viewed the proposal last fall, but the Coyotes also released a presentation this past summer that outlined key points of the proposal.

The council voted 5-2 in June in favor of moving forward in negotiations with the Coyotes. Since those negotiations began, sources said that the proposal has actually improved significantly for the City of Tempe, based on more concessions from the Coyotes. With that in mind, there appears to be majority support within the council for the proposal.

While some citizens groups oppose the project, sources said that two separate polls have been conducted of Tempe citizens, and that more than 60 percent of them approve of the project as well; a telling window into what the referendum might produce.

As for the threat of a lawsuit, two legal sources said that Goldwater would likely only get involved if/when Tempe puts up a guarantee for the revenue bonds. The airport has threatened litigation over the construction of multi-residence units that it says violate a 1994 intergovernmental agreement between the cities, but that agreement appears to make an exception for soundproofed apartments such as the ones that the Coyotes plan to build; a point which Coyotes attorney Nick Wood drove home at the council meeting in June. Multiple legal sources believe that the airport, and by extension the City of Phoenix, do not have a strong case.

Sky Harbor threatened to sue the City of Tempe in May. Earlier this month, it sent flyers to 100,000 homes in Tempe, Scottsdale and Phoenix, warning residents that the new apartments could alter flight paths and create new plane noise over those neighborhoods.

“I reject this alarmist tactic,” he wrote in a statement issued by the city. “Our region is known for collaboration and responsible action. It is unprecedented for a neighboring city to stuff mailboxes with its opinion about an unapproved development project.”

Per requirements, the FAA would have to conduct an impact study on residents before altering flight paths, a move that aviation sources said is highly unlikely. As PHNX has previously reported, there are already multiple residences along Rio Salado to which Sky Harbor offered no objection. An Arizona Republic investigation found that the airport at least knew about Tempe’s 2013 Papago Park Center and did not oppose it.

Those who know Woods know how mild mannered he is, but he admitted that the flyers angered him.

“I was really frustrated,” he said. “I’m always happy to talk, but that’s not the way to go about things.”

While the aforementioned polls suggest significant support for the project among citizens, the project also appears to have support among business leaders.

“At first blush, you see a lot of opportunity with a project like this, but there are stakeholders that are impacted, there’s potential displacement in terms of traffic and other things so we formed a committee and met over eight weeks with the idea that they would give a recommendation to the board,” Tempe Chamber of Commerce president and CEO Colin Diaz said. “As of Tuesday of [last] week, we heard that recommendation and took a formal vote. As a board, we are in support of the Coyotes in this process, as well as the city’s due diligence to the process. We know that there’s still work to be done and there’s community meetings, but as a whole, looking at the economic impact and looking at what it will mean for the city as a whole, from a tax perspective, from job creation to a lot of the programming that they’re going to be supporting, it checks a lot of boxes for us and makes a lot of sense.”

Diaz said that other entities are in agreement, but the chamber wanted to get a deeper sense of the project.

“We’ve worked with the Downtown Tempe Authority, who is also on my board, and we’ve worked with the Tempe Tourism Office that would also be impacted. But we also met with the developers, we met with the airport, and we reached out to the city, which obviously with this being an active negotiation, wasn’t really able to share much. Our thought was, we wanted to do as much due diligence as we could on all of the items that are available to us to have an informed opinion.

“But if you just look at the finances, it’s a no-brainer because this is new revenue that didn’t exist. You’re remediating an area of the city on land that would cost about $40 million to do, and part of the reason it’s never been remediated is because it would cost $40 million to do it. Now you’ve got a mixed use of housing and retail and a theater component and a public space for ice.”

Diaz believes that the project could have a ripple effect.

“If you look at Tempe Town Lake, it’s the second largest attraction in the state behind the Grand Canyon, with about two and a half million visitors per year,” he said. “This project is predicting three million a year. Obviously, some of those will be overlapped, but a long time ago, there were talks about whether it made sense to extend the lake west. I think a project like this means it would make sense over time, and then when you have bookend activity on the east and west ends of the lake, you’d start to see more of an emphasis on activating that space, which helps in a lot of ways. It helps with keeping people and dollars in the region longer, it helps with having something for everybody, and it helps with the vibrancy of the region.”

While city council discussions of projects of this magnitude are often fluid, and while there is further public comment planned at council meetings in November, it appears that the Coyotes and their fans will have clarity on the next step of this project before the holidays, a timeline that both Woods and council member Randy Keating were hoping for when they spoke to PHNX Sports in June.