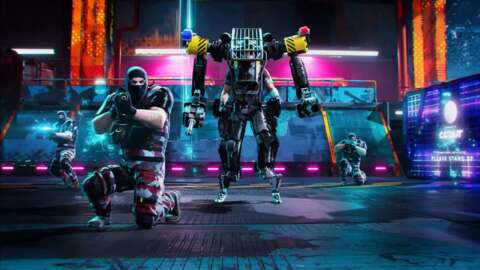 Creative Assembly’s sci-fi, team-based shooter Hyenas will be playable by the public for the first time this week, when its first alpha opens on July 14. The initial alpha will be open to players on PC in the US, with testing opportunities for other regions and platforms coming in future phases.

The shooter takes place in a futuristic, spacebound setting, with players forming teams of space pirates known as Hyenas to go after giant spaceship shopping malls known as Plunderships.

While Hyenas shares a lot in common with battle royale games like Apex Legends, the studio swears Hyenas is not a battle royale–instead, the PVPVE experience sees teams fighting over Merch, pop culture-themed loot guarded by NPC threats and coveted by other teams of Hyenas.

In the initial alpha, players will be able to check out characters Doctor Hotfix, The Pro, and Commander Wright, along with other Hyenas who are still yet to be announced. Interested players can sign up for the alpha at Hyenas’ official website.

The studio making Hyenas is Creative Assembly, most known for developing Alien Isolation and Halo Wars 2. Hyenas will be released on Xbox Series X|S, Xbox One, PlayStation 5, PlayStation 4 and PC, with the release window currently set for some time in 2023.