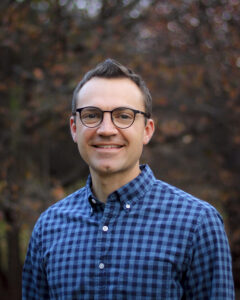 OMAHA — The political divide over childhood vaccinations surfaced before the COVID-19 virus. But partisan discord about them has grown faster than the hot-button issue of abortion.

That’s according to research led by Omaha Creighton University’s Kevin Estep and newly published in the American Journal of Public Health.

Estep, assistant professor in the Department of Cultural and Social Studies, and his team based the study on about 1,500 state legislative bills and 230 legislative votes across the country over 25 years.

The project analyzed law-making trends from 1995-2020. But the authors extended their research beyond the published article to see if trends continued during the most recent legislative sessions that took place during the COVID-19 pandemic.

They found that COVID-19 “added fuel to the fire,” Estep said. “It’s probably more divided now than it’s ever been.”

Public health is at stake

Among the team’s findings was that, a decade ago, sporting the label of a Democrat or Republican had relatively little sway on how a state legislator decided on an immunization-related policy such as whether a parent should have more or less ability to opt their kids out of vaccines.

“Ten or so years ago, party affiliation would have given us relatively little ability to predict what position a legislator is going to take,” said Estep. “That’s not the case today.”

The researchers said that lawmakers were more likely to align with people in their preferred political party on vaccine bills in 2019-2020 than they were likely to align with their party on abortion-related bills in 2011-2012. That last two-year stretch came during a peak in the polarized conflict between the Tea Party and then-President Barack Obama’s administration.

At no point during their research period was immunization more divisive for lawmakers than abortion, Estep said. But the fast pace at which the divide widened on immunizations is what made that topic stand out, he said.

The split is disheartening because public health is at stake, said Estep, who teaches classes on public health, health policy and healthcare administration.

“You want to see clearly — what are the facts and what does history tell us about what will help in this particular situation? But whenever things become clouded or fogged with partisan ideology, it becomes hard to see those facts and that can obscure good policy-making that is in the public interest,” he said.

California measles outbreak was a pivot

Assisting in the analysis were Creighton students Annika Muse and Shannon Sweeney, and Neal Goldstein, an epidemiologist and public health expert at Drexel University.

He said that from the late 1990s into the early 2000s, safety concerns topped discussions related to immunizations for children. When scientists offered more evidence, he said, objections about safety lost steam and critics shifted focus to civil liberties and parental rights.

A turning point in driving the political divide came with the 2015 Disneyland-associated measles outbreak, Estep said. California’s decision to tighten exemptions gave rise to cries of government overreach by what was viewed as a liberal state led by a Democratic governor, Jerry Brown.

“The measles epidemic of 2019 put vaccines in the spotlight once again, forcing state legislatures to weigh calls from public health officials to restrict exemptions against the demands of those who saw this as an infringement on parental rights. Our findings suggest this second round of ‘takeoff’ conditions further solidified party lines.”

In following years, more states proposed legislation to restrict or expand parent opportunities to opt out of exemptions.

The researchers said discord was less for some proposed vaccine policies than others. Bills related to HPV turned more partisan, for example, than those related to varicella or measles, mumps and rubella.

Estep said the Republican-Democrat divide was apparent in responses to public emergencies, such as whether to allow mercury-containing vaccines during outbreaks and whether to ban unvaccinated children from schools.

“What is different is that more and more issues are pulled into that partisan divide,” said Estep. “Previously non-political issues have become tainted with partisan ideas and politics so that opinions and attitudes of ordinary people and elected officials tend to align with party.”

If there is a “silver lining,” said Estep, it is that state-level bills influenced heavily by either Republicans or Democrats are less likely to actually pass into law.

“By its very design,” said the article, “lawmaking in the United States requires compromise and coalition-building, which might protect population health from the worst effects of polarization.”

Also, said Estep, the “conservative versus progressive” conflict is not that old when it comes to childhood vaccines.

“For most of the time of our study, this was not a particularly divisive issue,” he said. “It’s possible to return to that, but it does take effort.”

GET THE MORNING HEADLINES DELIVERED TO YOUR INBOX