While the Dunk craze is surely reaching its saturation point—I was in Sydney earlier this week and it felt like 40% of kids were rocking Pandas—there’s always room for innovation and amazing design work on the decades-old shoe. It just doesn’t always have to come from Nike itself.

Singapore’s Ng Poh Hian, aka Bob, is one of the world’s best sneaker customisers, taking official shoes and cutting them up, changing their colourways, and adding details to create his own sought-after releases.

His label, No-Brainer*, has been dressing up (and dressing down) sneakers like the Air Force 1, Dunks, Blazers, Converse All-Stars and Vans sk8 (just to name a few) for years, but it’s his latest effort, a pair of Dunks based on the manga/anime series Initial D, that I want to look at today.

Based entirely on Takumi Fujiwara’s Toyota Sprinter, they’re not exactly screaming, “I am a sneaker based on an old, beloved manga,” but anyone who knows the car/series will know straight away what the deal is. The colours are perfect, the text at the heel is necessary, the license plate being stamped on the midsole is a nice touch, and I really like the little orange tag to represent the indicators.

Here’s a look at the shoe and the car together to give you an idea of what’s being borrowed for the homage: 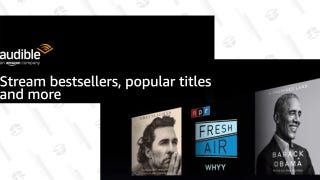 Listen up
The Audible Premium Plus experience for Amazon Prime users includes unlimited listening to the Premium Catalog, plus (see what they do there?) one credit per month for any title of their choice.

And here’s a mock-up of what the shoe would look like in the flesh:

When these were first shown off a few days ago on the label’s Instagram page, Bob said, “This is a sneaker concept design,” and that they were “not available at the moment.”

Public reception has been so overwhelmingly positive since those first images, however, that there are now availability details. Bob has since put up a new post teasing a September release:

As for getting hold of a pair, well, it’s 2022, you should already know what to expect, but I’ll spell it out anyway. Because these are customs, you won’t be relying on the regular (and utterly broken) store-to-StockX pipeline; instead these are purchased directly from Bob, albeit within a very short timeframe and for a lot of money.