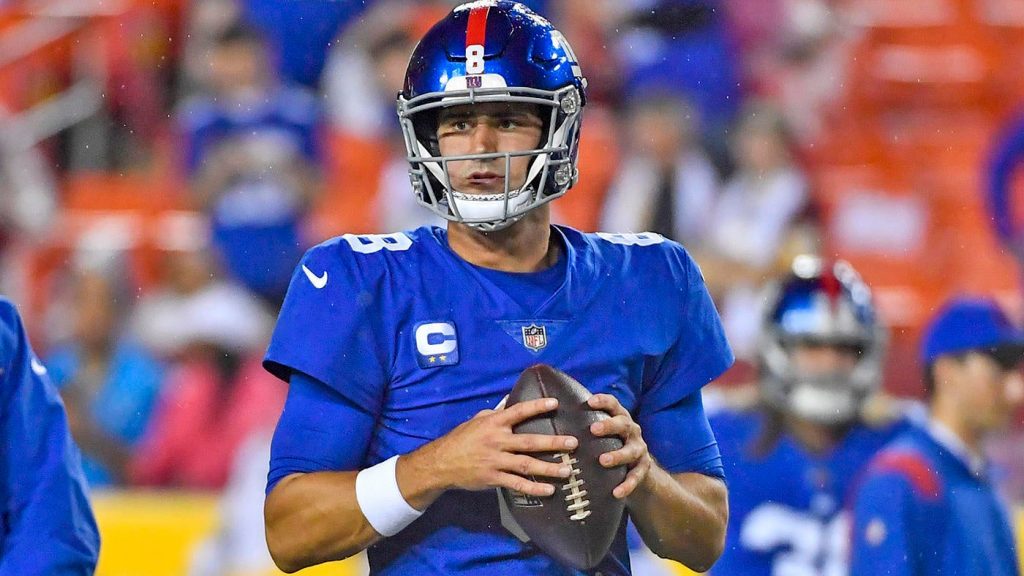 If the New York Giants are going to make a statement in the NFC East Monday night, Daniel Jones is going to have to break his dubious streak of being winless in prime time starts. The Giants have been a laughingstock around the NFL over the past five seasons, as their 22-51 record since the start of the 2017 season is tied with the New York Jets for the worst in the league.

At the center of the Giants failure to win in prime time games is Jones, who sports an 0-8 record in such contests. As the Giants enter Week 3 with a 2-0 record (and one of only two unbeaten teams in the NFC), Jones will have an opportunity to snap the winless drought in primetime — and put New York in the conversation as a serious contender in the NFC East.

How bad has Jones actually been in primetime games since he entered the league in 2019? The numbers have been less than ideal.

The numbers aren’t great for Jones in his eight prime time starts, completing 179 of 286 passes (62.6%) for 1,731 yards with 12 touchdowns to 12 interceptions for a 76.0 rating. Jones never has thrown for three touchdowns in a prime time affair, and only had one game where he didn’t throw an interception.

Jones has never thrown for 300 yards in a prime time game while his team has averaged 18.5 points per game. The Giants have scored fewer than 20 points in five of those eight contests and have lost by an average of 9.6 points. Four of those losses have been by a field goal or less.

Jones just has two fourth quarter passing touchdowns in the one-score prime time games, with a failed two-point conversion to time a 2020 games against Tampa Bay and a lost fumble on the final drive against Philadelphia that same year.

The Giants quarterback just hasn’t got it done through the air. How about on the ground?

Jones has been impressive carrying the football in prime time games, having 36 carries for 313 yards and a touchdown, averaging 8.69 yards per carry and 39.1 yards per game. He does have four fumbles and lost three, including the one mentioned above on the final possession against the Eagles in 2020.

Of course, Jones is known for falling on a 80-yard run against Philadelphia that night — having an easy score in sight. NFL next Gen Stats tracked Jones at 21.23 miles an hour on the run before he tripped and failed to score the touchdown.

The Giants did score later in the possession, but blew a 21-10 lead with 6:21 left. The 80-yard run by Jones is the longest run for a quarterback since Colin Kaepernick in 2014, but Jones failed to score. That run just magnifies Jones’ prime time struggles.

Jones averages 255.5 yards per game (passing and rushing) with 13 total touchdowns and 15 turnovers (12 interceptions and three lost fumbles) in prime time games. The numbers haven’t been great, and the Giants offense has struggled in those primetime games as a result. Jones has completed 63.1% of passes in his career and averaged 219.1 passing yards per game (216.4 in primetime) with 48 touchdowns to 30 interceptions for an 84.9 rating — so his prime time numbers throwing the football are significantly worse.

Those games are in the past as Jones no longer has Pat Shurmur and Joe Judge coaching him, but a coach that plays to his strengths in Brian Daboll. Jones has completed 70.9% of his passes for 364 yards with three touchdowns to just one interception for just two games with a 99.8 passer rating.  He also has only 16 carries for 46 yards (2.8 yards per carry), but the Giants are 2-0 because Jones has only one interception and one lost fumble.

Jones has struggled against the Cowboys in his career, losing four of five games while completing 61.2% of his passes for 776 yards with three touchdowns and two interceptions (82.4 rating). He also has 21 carries for 78 yards with five lost fumbles.

Monday night will answer plenty of questions if Jones struggles in prime time because of the prior coaching staff and poor offensive lines around him — or if Jones just freezes under the lights. This is the best play-calling staff and offensive line Jones has been with in his four NFL seasons.