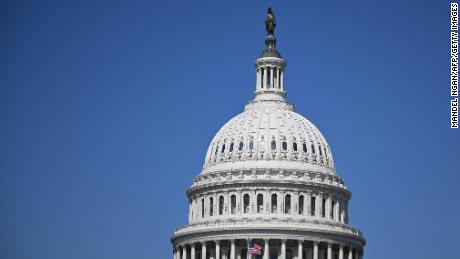 But a look at some new polling shows that maybe some things do matter.

We’ll begin there as we look at the political week that was.

Last week, Monmouth University released its latest survey results on the generic congressional ballot. Among registered voters, Republicans still led by 2 points, 48% to 46%. The result closely matches the average of recent polls, which has Republicans with a 1-point advantage on the generic ballot, which usually asks respondents some form of the following question: “If the elections for Congress were held today, would you vote for the Democratic or Republican Party?”

The latest Monmouth result, though, marked an improvement for Democrats who had trailed 50% to 43% when the university last polled on the generic ballot in May.

Normally, I’d dismiss movement from one poll to the next as statistical noise. These two Monmouth results are within the margin of error of each other.

But a look at all polling shows the same thing: Democrats have been gaining on the generic ballot since Roe was overturned.

It’s a sign that voters may be more reactive to events than we give them credit for.

By my count, there have been eight different pollsters who ask about the generic ballot and conducted a poll before and after the Supreme Court found there was no federal constitutional right to an abortion.

Every single one of them found Democrats doing better in their poll taken post-abortion ruling compared with the one taken pre-abortion ruling. The average shift was about 3 points in Democrats’ favor.

This 3-point change may not seem like a lot, and it could reverse itself as we get further away from the ruling. Still, it puts Democrats in their best position on the generic ballot in the last six months.

It also makes some sense that the polls moved. Poll after poll shows that Americans disagree with what the Supreme Court did. A Pew Research Center survey released last week showed that 57% of Americans disapproved of the decision, for example.
And while abortion is not the most important issue on voters’ minds, it’s clearly more important than it has been in any recent election. In May, Gallup found that 27% of Americans said they would only vote for a candidate who shared their views on abortion. This was higher than Gallup has measured in any midterm or presidential election year going back to at least 1992.

Meanwhile, the percentage of voters who said it would not be a major issue was down to just 16%. That’s by far the lowest Gallup has measured in an election year.

It wouldn’t surprise me if the percentage were higher in future polling given that the Gallup poll was taken before we knew for sure that the Supreme Court would overturn Roe.

Democrats are still the underdogs in the fight for the US House. Republicans need a net gain of a mere four seats to win back the majority. Race rating experts put the GOP on a clear pathway to that gain and more. Moreover, Republicans tend to outperform their generic ballot numbers (see 2006, 2014 and 2020 as prime examples) at the ballot box.
It would be tough for Democrats to hang on to such a small edge when the economy is such an important issue to voters, who see it as weak. (It’s a major reason why President Joe Biden’s approval rating is so low.)
Where it could really matter is the battle for control of the US Senate. As I noted earlier this month, Democrats have a real chance to keep control of the upper chamber of Congress for which Republicans have nominated or could nominate a number of flawed candidates this cycle.

A movement of a few points in the key races could make all the difference in the world.

Why Boris had to go, but Biden’s still got a chance

Perhaps, the biggest electoral news from this past week came from across the pond. UK Prime Minister Boris Johnson announced that he would be stepping down. It came after a wave of scandal and resignations from his government.

Johnson’s announced departure was not a surprise, however. The polls showed him to be in rough shape and provide a useful comparison point to why the American leader (Biden) may be down but shouldn’t be counted out just yet.

Johnson’s popularity ratings (e.g. job approval and personal favorability) were south of 25% by the time he announced his resignation. That matched where things stood earlier in the year, when I noted that Biden “should be thankful he’s polling better” than Johnson.
The reason Johnson’s decision was not a surprise was because no prime minister or US president has electorally rebounded from such low ratings. Every single prime minister either resigned or didn’t stand for reelection. Most recently, this included former British Prime Minister Gordon Brown. The most notorious example of a US president being so unpopular was Richard Nixon before he decided to resign in disgrace.

Biden, who is at the low point of his presidency, has an approval rating of 38% by comparison. The only president with such a low approval rating at this point in their first term was Harry Truman in 1946. Truman’s Democratic Party lost both the House and the Senate in the midterms.

Truman, however, proves the point that Biden can recover. Truman would go on to win the 1948 presidential election.

Indeed, there are a number of examples of presidents who had approval ratings at some point in their first term that are comparable to Biden’s right now and went on to win another presidential election. Bill Clinton and Ronald Reagan come to mind, besides Truman.

There are also examples of presidents who were as or more unpopular than Biden and lost. See Jimmy Carter, Gerald Ford and Trump.

The lesson here, though, is that approval ratings at this point don’t tell us much about whether a president will get another term. That’s very different from Johnson, who was in a position from which no UK prime minister had ever recovered.

That 50% mark is where Nixon’s approval rating stood among Republicans before he resigned.

This doesn’t mean Biden’s safe or anything like that. It just shows he has a lot more strength and potential than Johnson did by the time the curtains closed on his government.

For your brief encounters: It’s hot out there

A look at the weather map across the country reveals that a lot of places are under either heat advisories or excessive heat warnings. Where I sleep is not one of those areas, though I’m still sweating like I live in a sauna.
The good or bad news, depending on your point of view, is that we’re nearing the hottest day of the year for most places. That occurs sometime over a two week period starting on July 15 (i.e. this week), according to the National Oceanic and Atmospheric Administration.

So while the next few weeks will be rough, climatology suggests the worst will soon be over.

Bible belief drops: Just 20% of Americans now believe that the Bible is “the actual word of God,” according to Gallup. That’s the lowest percentage recorded dating back to 1976. A plurality (49%) believe the Bible was inspired by God. A record-high 29% say the Bible is a collection of “fables, legends, history and moral precepts recorded by man.”
Coronavirus regrets: A new Pew Research Center poll asked Americans what the country has prioritized either too little, too much or the right amount during the pandemic. Most (62%) said we have given too little priority to K-12 education needs. Few said we gave too much attention to any one thing, though the highest on this metric was respecting individual choices at 23%.

Baseball All-Star voting: We’re a little more than a week away from the only federal primary election of the month, but Major League Baseball fans have already rendered their verdict on who will start in this month’s All-Star game. Unfortunately for this Yankees hater, Aaron Judge and Giancarlo Stanton were selected.