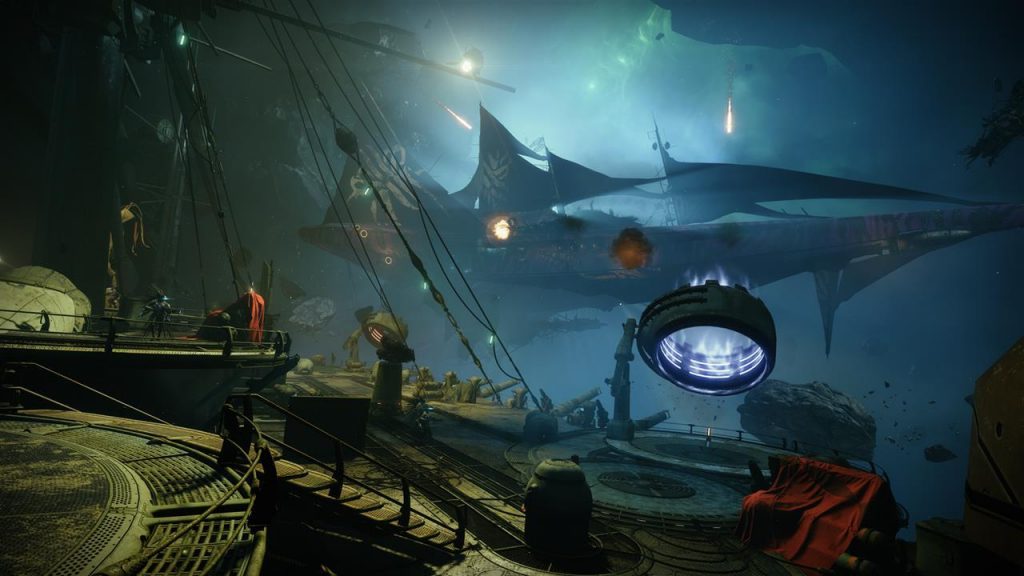 Destiny 2’s Season of Plunder has brought with it a new seasonal activity, one that leans heavily into the pirate adventure theme that you’ll be engaging in for the next three months. Ketchcrash is naval warfare but with a Destiny twist, as you’ll be exploring the Reef on your very own Eliksni spaceship.

Like other seasonal activities, Ketchcrash is an excellent way to farm for gear and earn the new swashbuckler-themed loot that has been introduced to the game. It’s not complex to dive into and it’s a fun diversion for a fireteam of six Guardians to hone their new Arc 3.0 skills in. The activity also rewards you with Map Fragments, which can be used to make Treasure Maps and earn even better loot in Expeditions.

For more Destiny 2 guides, check out the Season of Plunder gear roundup, the weekly Seasonal Challenges, and how to earn Map Fragments.

Like several other activities in Destiny 2, all you have to do is open your Destinations tab, select the HELM, and then select Ketchcrash on the left side of the menu. Completing three Ketchcrash activities every week will also reward you with a Powerful Gear engram, so grab a few rounds before weekly resets so that you can slowly improve your Guardian power level.

Once you’re in a fireteam, it’s time to go pick a fight with the pirate captains working under Eramis. You’ll start this round on your Ketch as it comes into the bombardment range of an enemy vessel. From here, the goal is to quickly head to the top deck, repel any pirates, and align the cannon accelerators.

These are four plates that you’ll have to step into, similar to the ones used in a Vex public activity. Enemies can also occupy these plates to stop the cannons from firing, so the fireteam will need to split up to cover all of its bases. One Guardian per plate, with the other two Guardians running between them to provide covering fire will be a good strategy here. Once all four plates have been secured, you’ll weaken the enemy Ketch and you can prepare to board it by entering a nearby launcher.

Once you’ve boarded the enemy Ketch, start eliminating enemies and work your way to the bottom decks. From here, there’ll be two small missions that you can play to progress the activity. So far, we’ve discovered three variants:

In this section, you’ll face Fallen enemies and a massive Security Optic servitor that needs to be taken out. Wipe out the enemies, destroy regular Servitors to expose open plates, and stand in them so that the Security Optic can be exposed. Once you’ve captured a few plates, wait for the shields to fall on the Security Optic and unleash all your firepower on it to progress. Be careful of the security turrets guarding the Security Optic though, as they’re tough and they can shred your armor in seconds. Find some cover before you start firing at them, and you’ll be able to finish this boss off easily.

In this section, you’ll face two Walker tanks. They’re not too tough, but they will be protected by shields that you need to bypass. To do this, go after the Fallen Scorch captain in the room, defeat it, and take the Scorch cannon. Use that to destroy the shield generators (as indicated by the purple stream of energy being directed from the generators to the Walker) and the Walker tanks will be left vulnerable. Once both Walker tanks are eliminated, you can move on.

For a little bit of breaking-and-entering action, this room will task you with causing some wanton destruction on the Ketch ship. You’ll spot several Ether storage tanks in this hangar, each one standing out thanks to a purple hue. Hunt down Heavy Shanks–or Gunnery Mates as they’re called in this activity–destroy them and collect the explosive charges that they drop. While it is tempting to use them as makeshift grenades against enemies, lob these charges at the storage tanks instead to take them out of action.

Once all the storage tanks are destroyed, it’s time to move on.

If Ketchcrash is anything like Blind Well or Nightmare Containment, expect a new boss to rotate into action after every day. For this week’s debut of Ketchcrash, you’ll be doing battle against a heavily-armed Shanks privateer called Aye-1. This boss fight isn’t too challenging, as you’ll be battling Aye-I and its minions across the top deck of its Ketch. Once you’ve done enough damage, Aye-I will call in Servitor reinforcements and activate its shields.

Take out the Servitors, wait for Aye-I to teleport back onto the top deck, and wipe its remaining health out with whatever you choose. You’ll also find flags that you can activate (if you’ve unlocked the right node on the Star Chart) and call in reinforcements from Spider’s gang to help you out in the fight.

Once Aye-I is eliminated, you’ll earn some new loot and some banter from the main characters in Season of Plunder.