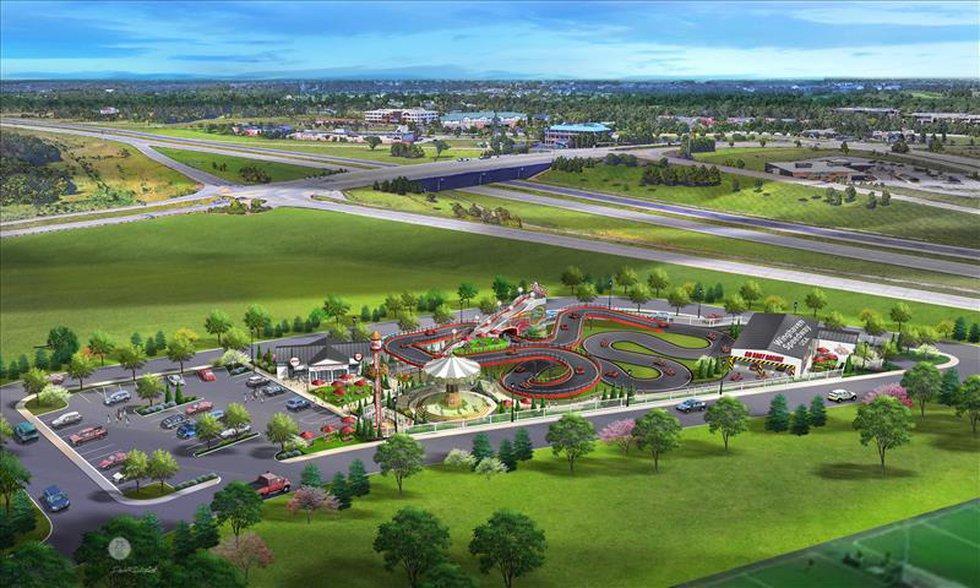 SkyView Partners said the project has been in the works for several years before they decided on a 2.5-acre piece of property in O’Fallon at the intersection of I-64 and Highway DD.

“That’s where the growth is right now and there’s a void in St. Charles County for family-friendly entertainment,” said Todd Schneider, managing partner of SkyView Partners.

The current plans include a multi-level go-cart track, a 130-foot long slide, a 50-foot tower ride, a swinging carousel, a children’s go-cart track and a Carl’s Drive-In restaurant.

“There’s no admission to come into the park, you just pay by the ride,” said Schneider. “The family can have something to eat and the kids can go ride, the whole family can ride go-carts together and then they can circle back and have ice cream all in one place.”

Once complete, the project will sit in the Caledonia area of O’Fallon, alongside the Rush soccer fields and the movie theater. Schneider hopes the venue will attract those coming to town for travel soccer games.

“Families are coming in from out of town, a lot of them have games where they have one in the morning and one in the afternoon so they have an hour or two to kill in between, we think we’re a great option for them,” he said.

Last week, SkyView Partners presented the project to the city’s planning and zoning committee, who approved several conditional use permits. Next week, they’ll make a presentation in front of city council.

“It’s right in front of Rush soccer field which will help all that and in front of the movie theater so it’s an entertainment destination,” said Bill Hennessey, mayor of O’Fallon. “I’m excited for something like this to come to O’Fallon.”

Hennessey said the city continues its efforts to develop the Caledonia area, which has seen an explosion of new homes built over the last several years. Additional developments could be forthcoming, he said.

Schneider said if the city approves the project, it hopes to begin construction this winter and will plan to open by the Fourth of July in 2023. He said it will likely operate between March and December, but plans are already in the works for what the space could be used for during its slow season.

Hennessey said some concerns have been raised over the potential for additional noise and traffic. He hopes to have those resolved before the project is finalized.