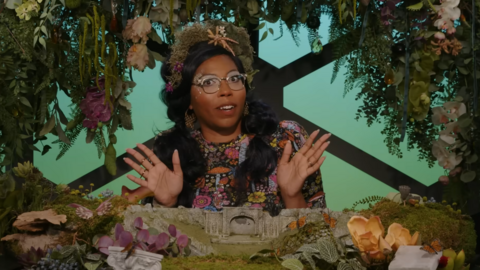 Dropout TV has revealed the next campaign of Dimension 20, its Dungeon & Dragons show. Called A Court of Fey & Flowers, the new campaign sees Aabria Iyengar once again take the reigns as Dungeon Master, weaving a tale about the complicated politics of a Fey court.

Good Society utilizes more collaborative roleplaying in comparison to DnD’s often confrontational combat, featuring storylines closer in style to what’s seen in Downton Abbey or Bridgerton. There’s less outright combat against your enemies; instead, you need to work within the systems of high society–exploit your connections, lean upon your family’s influence, and plant rumors in order to achieve your secret aim.

“There’s something about the mechanics and how elegantly they’re written into Good Society that allows you to drop into the pacing of that kind of storytelling,” Iyengar told Polygon. “It shows you the specific ways in which your character expresses themselves. There’s a rumor phase and a letter-writing phase, and reputation markers and a reputation economy. [I] was so, so happy to integrate [that] into the story.”

Iyengar is a popular and much-loved face in the Dimension 20 community, making her debut as a player in Pirates of Leviathan. She’d then return as a DM for Misfits & Magic, and then once more as a player in The Seven. Beyond Dimension 20, Iyengar is one of the most talented voices and storytellers in the DnD space and tabletop RPGs at large–she’s appeared on Critical Role, The Adventure Zone, Vampire: The Masquerade – New York By Night, Roll20, and a whole lot more.

For A Court of Fey & Flowers, Iyengar will be joined by veteran Dimension 20 players Brennan Lee Mulligan (executive producer, writer, and main Dungeon Master of Dimension 20), Lou Wilson, and Emily Axford, as well as new players Surena Marie, Oscar Montoya, and Omar Najam. The six players will be portraying different Fey who have come together to celebrate the Bloom, an event that delivers the necessary doses of magic to the Feywild and the other realms. When the Bloom comes under threat, the six Fey will have to band together in order to save it, all while each also pursues their own selfish goals.

A Court of Fey & Flowers is Dimension 20’s fifteenth campaign, and fourth to feature a DM who isn’t Brennan Lee Mulligan. The other three campaigns are Misfits & Magic (campaign 10), Shriek Week (campaign 12), and Coffin Run (campaign 14). Dimension 20 usually features CollegeHumor talent or their friends from the wider tabletop roleplaying community.